Hallmark’s New Star, Nancy Grace, Begins the Next Chapter in Her Life 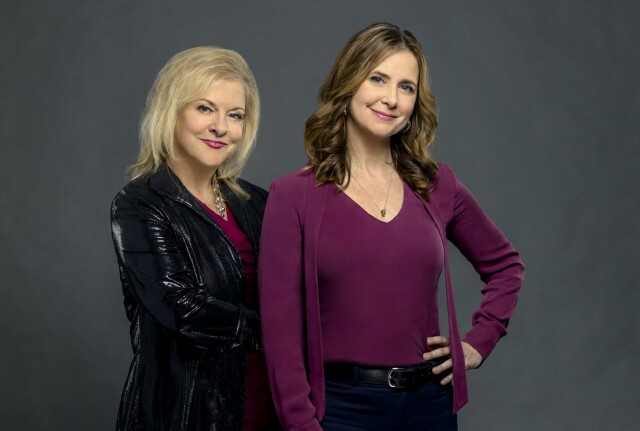 During the 12-year run of her highly successful HLN show, Nancy Grace’s passionate commitment to championing crime victim’s rights was palpable. As a victim herself, the former prosecutor turned legal commentator and author poured her heart into the show. Grace recently delivered her final “goodnight” on HLN; on Sunday she will enter the next phase of her career as the executive producer of Hailey Dean Mystery: Murder, With Love, the start of what she hopes will be a new franchise on Hallmark Movies & Mysteries.  The movie, starring Kellie Martin, marks the first of Grace’s novels to be adapted for a TV movie.

For Grace (pictured top left, with Martin), the project is extremely personal -- and one that began in 1979 following the brutal slaying of her fiancé Keith Griffin at the hands of gunman. Following those tragic events, Grace devoted herself wholeheartedly to her work as a prosecutor, unsure if she would ever experience love again. It was during this devastatingly dark period that Grace conceived the character of Hailey Dean, a former prosecutor turned therapist.

“Hailey is a character especially close to me,” Grace tells me in an exclusive interview. “When my fiancé was murdered, right before our wedding many years ago, I never dreamed I would have a daughter, a family, or even ever love again. I dedicated myself to one murder trial after another, yet always wanted to name a daughter Hailey after Halley’s Comet; you know, a once-in-a-lifetime thing. So I named my heroine Hailey Dean.”

Love would eventually find Grace in 2007 when she married David Linch, an old college friend, and later that same year prematurely deliver the couple’s twins; Lucy Elizabeth and John David. The pregnancy was not easy and in a strange twist of fate played a major part in this latest project (one she also has a cameo in as, of all things, a defense attorney).

“My daughter’s name was to be Hailey Elizabeth,” she tells me. “But when Lucy and I almost died [from complications] I felt my grandmother come to me in the emergency room. Her name was Lucy Stokes, so I named her after my grandmother instead. Now Hailey will forever live in the pages of my books.”

It was during the pregnancy that Grace found her Hailey watching actress Kellie Martin. “I would watch Mystery Woman -- and Dexter -- non-stop,” she explains. “I really felt I knew Kelly [star of the Mystery Woman series]. Besides being beautiful, she is one of those actors that has a connection to people and is relatable. I love that about her. When I found out Kelly was cast I couldn’t believe it! She’s perfect!”

According to Grace, the Hallmark “family” is the perfect home for the first of, hopefully, many Hailey Dean projects. She’s relieved it’s also something she can watch with her kids and, unlike her HLN show, won’t have her diving for the mute button.

As for parting ways with HLN, Grace insists there are no regrets. “HLN was a wonderful TV home for 12 years,“ she says. “My kids grew up for eight years thinking of HLN and CNN as where mommy worked. But there are so many more things I want to do, and now is my chance.”

According to Grace those new ventures will be multi-platform and include digital (including a crime-based web site), podcasts and traditional TV. She’d love to write full time but feels she has a higher purpose, admitting, “I feel that calling is to fight crime. Hello! I want to keep doing that.”

In 2011 Grace memorably triumphed on ABC’s Dancing with the Stars, unexpectedly placing fifth. “I’m waiting for them to call for a re-match,” she laughs. “That was so much fun. I just have to find my partner Tristan. I believe he’s in Australia with his wife and baby. That was one of the greatest experiences I’ve ever had.”