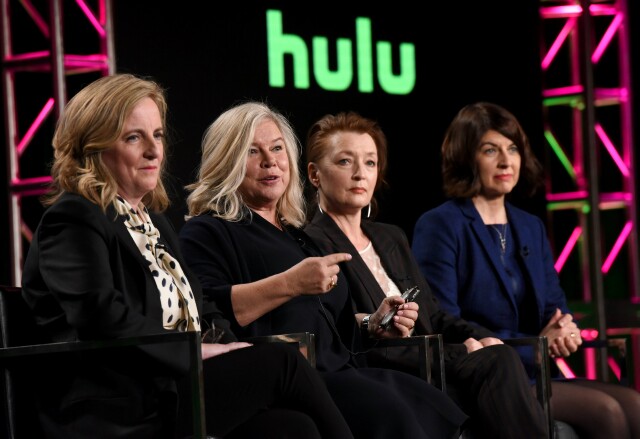 In 18th century England, Harris’s List of Covent Garden Ladies was the Consumer Reports of bordellos, helping men -- and some women -- find just what they sought. Explicitly yet eloquently detailing the “special talents” of hookers, the one-time bestseller, which can still be purchased online, continues to amuse. Just recently it inspired Moira Buffini to write a TV show on the subject, Harlots, streaming on Hulu beginning March 29. It is beautifully written, acted, directed and produced – and also surprisingly feminist, as Buffini and her team made clear last weekend during Hulu’s day at the Winter 2017 Television Critics Association tour.

“Our rule from the beginning was, ‘Everything from the whore's eye view,’” executive producer Alison Owen said by way of introducing the show at the Harlots press conference. “Everything is looking out, rather than looking in at these women.  That's not to say that we can’t have lots of fun.  You’ll see that there's as much male nudity as there is female nudity in the program.” (Owen is pictured at top, second from left, with executive producer Debra Hayward at left, star Lesley Manville and executive producer Moira Buffini at right.)

In addition to the sexy scenes, there’s a genuine dramatic plot, rife with tension. At the heart of it are two houses of ill repute, fighting for business. And nothing, absolutely nothing, will be off limits.

One brothel is run by Margaret Wells (Samantha Morton), a slattern who as a child was sold by her mother for a pair of shoes. That horrendous beginning makes her painfully aware of how untrustworthy people are and how important money is. Her establishment is dedicated to quick profit.

On the other side of the battle of the brothels is a far more refined house, run by Lydia Quigley, who has enough airs to give the queen pointers. Lesley Manville, a veteran of Shakespeare plays and arthouse films, pulls off the imperious character with wicked delight.

“Moira had deliciously described her in the script,” Manville said at a party at the end of Hulu’s day at TCA. “Lydia Quigley was the Lady Macbeth of brothel owners. What actress could resist?”

It’s wonderful that she didn’t. A sophisticate in all matters sexual, Lydia is versed in the intellectual arts, too. Comfortably cultured, she insists that her employees learn other languages, know a bit of literature and be able to entertain clients with other parts of their bodies, namely their brains.

She does, though, have this rather territorial approach about owning the women.

One suspects Lydia could give Lear pointers on manipulation. Manville relishes her character’s bitchiness and acknowledges that she loves not having to figure it out on her own, but relies on the writers, producers and directors.  “I need third parties, brilliant third parties, not twats,” she said. Those third parties have given serious thought to the show’s finer details, even the lighting, which is so perfect for 1763, when no one could have simply switched on some track lights.

“What was interesting is that often off camera, where you think they could put some sort of light source, there would be great big candelabras,” Manville said. “So we were just using candles everywhere really, even when you could have cheated and had something else.”

One of the show’s charms is its devotion to historical accuracy. The silk costumes, corsets, deathly white makeup and wigs made of yak fur all define the period.

“They are trying to make us look good, which now, frankly, takes hours,” Manville laughed.

Despite a career spanning decades, Manville has never played a prostitute or a madam. And despite how many shows over the years have featured prostitutes, Harlots offers a very different take, as executive producer Owen noted.

“It was really important to us, right from the beginning, to make it very much about the female gaze, because, as you say, there's so much on film and television,” she explained. “Prostitutes and brothels are not a new subject.  They've been a familiar trope of the media since time began.  We were very determined to make something very different.”

They all promised that Harlots will reach beyond the bedroom into the battered psyches of the workers and twisted desires of the johns. Ultimately those working on the show hope it sheds light on a class and time not often considered today.  At the time, working as a prostitute was extraordinarily and unbelievably common; in the mid-18th century, the producers said, one in five women in London were working as prostitutes.

Consider that: Twenty percent of the female population working as whores, because it was their only way to have financial independence from men.

“We want people to be entertained by it,” Manville concluded, “and enlightened by it.”