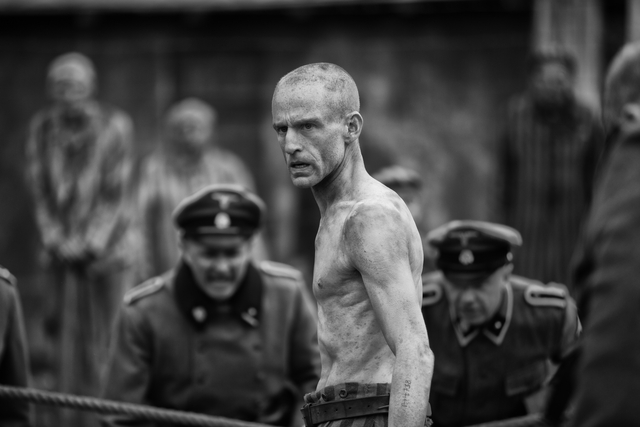 So much on television is ginned-up horror for the sake of shock value. Nothing, though, is more terrifying and shocking than the truth, as HBO's The Survivor proves. Telecast Wednesday, April 27, on Yom HaShoah, the Holocaust Day of Remembrance, the Barry Levinson film starring Ben Foster tells the story of a survivor of the concentration camps.

Every survivor's story, by definition, is harrowing. And each is different. All, though, were treated worse than vermin for the crime of being Jewish or gay or Romani or infirm.

Based on his son's book,The Survivor tells the true story of Harry Haft, a Jew sent to Auschwitz who was forced to become a boxer for the amusement of Nazis. He was turned into an unwilling killing machine in the camps; had he resisted, he would have been killed. His family was taken from him, and his freedom, his entire world was reduced to ash. Yet the will to live could not be extinguished. Once freed, he would spend the rest of his life looking for his first love.

Telling this story accurately and with loving kindness is an enormous responsibility, as Foster was well aware.

"Barry sent me this script, and I read it that day, and I was overwhelmed by the tale and overwhelmed with a full heart that he wanted to work with me again in this way," Foster said about Levinson, who hired him 20 years ago for Liberty Heights.

"You discover a role in small steps," Foster continued at a recent Television Critics Association press panel. "The closer you get to the story, the more immense it becomes. The way that I combat fear personally is the deep dive in getting lost in the research. I was surrounded by people who are very well connected. The Shoah Foundation guided us quite a bit. I watched thousands of hours of Holocaust survivor interviews, spending time with Yiddish experts, learning about this world, the responsibility to honor survivors.

"There aren't many left who are still on the planet, those who have survived the camps," he continued. "Some of their children are still with us. [It is an] immense responsibility to represent the complicated nature of this kind of trauma. I just had to not let the fear take hold and get lost in it."

At one point, Haft tells the story of a prisoner who could not find his cap. Without the cap at inspection, the prisoner would be shot. He runs back to the barracks and finds a cap that belonged to another prisoner. He later hears a shot and knows that man was killed for not having his cap.

Foster nails the cadence of Yiddish speakers. And, he moves with the weight of someone who hasendured the worst -- save death. Haft spent the rest of his life haunted by what he saw, heard – and did. He was able to kill men with a punch. Of course, the men forced into the ring with him were starved and more dead than alive.

To play a prisoner of the camps, Foster lost 62 pounds. With his skeletal frame and shaved head, he is completely convincing in the striped, coarse fabric of the imprisoned. He also does something that few in the audience might notice, but it goes to the authenticity of this film. When Haft speaks Hebrew, saying Kaddish (the prayer for the dead) over an opponent who begged Haft to kill him rather than die at the hands of the SS, Haft uses the pronunciation of the shetls, the Hebrew that was taught before the language was revived for the modern state of Israel. Today, it is heard among Yiddish speakers and the elderly, but someone of Foster's age would have learned the prayers with the more modern inflection.

Everyone in this production does the remarkable story honor. Billy Magnussen as a Nazi officer who plucks Haft from among the prisoners, feeds him, and uses him for "entertainment," gives a sly, oddly likable performance. (Odd because he is an SS officer.) Peter Sarsgaard brings compassion as a newspaper reporter who listens to Haft's story and eventually gives him the information Haft has longed to hear. And Danny DeVito, whose character helped train Rocky Marciano, delivers a nuanced portrayal of a man whose sense of loyalty to a fellow Jew has him quietly offer some training. He says "boychick" as easily as any Jewish mother talking to her son.

"Pugilistically speaking, you were taught wrong from the beginning," DeVito's Charlie Goldman says.

"What you think I haven't tried?" retorts John Leguizamo as Pepe, Haft's trainer now that he's a free man.

The extra training helps but ultimately does not matter when Marciano pulverizes Haft. That Haft lived through any of this is astounding, the fight being the least of it, though going into the ring with The Brockton Bomber was no mean feat.

Foster is as convincing jabbing as he is talking. More than playing a role, this has the feeling of inhabiting the man. Like anyone lucky enough to be born at a different time and in another place, he could not have known the horrors of the camp. Yet he portrays Haft with the pent-up fury of a man who was a living relic of a time and place wiped from the planet.

Levinson expected as much when he called him. "The piece requires an actor to be totally lost in a character, and I think Ben is one of the few actors of his generation that can transform himself and literally become like another person," the director explained. "That was a requirement for this particular piece, and the commitment to ultimately lose 60 pounds to do the camp parts of the film. To gain weight and then to gain additional weight -- that kind of commitment. Not just in terms of makeup, but he literally becomes another person. I think that's an essential requirement because you don't want to feel that we are somehow kind of playing a role. The piece needs real credibility, and that applies for all of the characters."

The credibility is felt in every scene. Even if watching requires hitting the pause button to catch your breath, stay with this. Devoting two hours to learning about Harry Haft and being reminded about what monsters roamed the Earth just a couple of generations ago should be required viewing, especially on the day where we stop to remember.

The Survivor will be telecast on HBO on Wednesday, April 27 at 8 p.m.