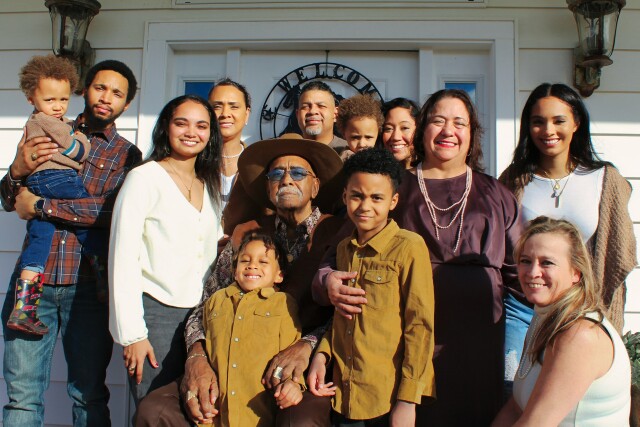 Though Hispanic Heritage Month will soon wrap up, the celebration has no end in sight for Hearst Magazines and Oprah Daily with a special collection of stories called The Power of Us. Across Oprah Daily and five Hearst brands -- including ELLE, Cosmopolitan, Good Housekeeping, House Beautiful and Delish -- Hispanic and Latinx journalists speak with changemakers in the worlds of culture, design, food and entertainment to honor and highlight their contributions and to remind the world that Hispanic and Latinx culture is American culture.

In June 2021, Hearst Magazines and Oprah Daily launched a new storytelling initiative titled Lift Every Voice which showcased conversations between young Black journalists and more than 50 Black elders. The Power of Us is the second installment of this initiative, which centers on the question: How has Hispanic and Latinx culture shaped America?

“I invite you to just dive in as six journalists speak to creators like actor Anthony Ramos and singer Becky G to share their own stories and how their cultural identity has impacted them and the world around them,” Oprah Winfrey says in the initiative’s launch video.

The following are highlights from each publication's contribution to The Power of Us.

In Oprah Daily, actress and comedian Aida Rodriguez writes candidly about how one of the most important messages she pushes through in her work is about the contributions of Latinx people to American society. It includes interviews with a variety of actors, creators, authors and personalities, including Anthony Ramos, who starred in the hit musicals In the Heights and Hamilton; television writer Santa Sierra; actress and Gentefied writer Julissa Calderon; author and activist Sulma Arzu-Brown; singer Yendry, and radio personality Enrique Santos.

Rodriguez asks each of them when they began celebrating Hispanic Heritage Month.

Ramos, like many Latinos, didn’t start celebrating until later in life. “Definitely when I got older," he says. "I learned we had this ‘month’ to celebrate and reflect on who we are. That’s dope.”

It took author Arzu-Brown a little while to feel the sense of festivity, too. "I started celebrating Hispanic Heritage Month about eight years ago when I authored my first book, Bad Hair Does Not Exist/Pelo Malo No Existe!, which was illustrated by Afro-Latina Isidra Sabio,” she says. “Even though the celebration was proclaimed in 1989, I was not conscious of this unifying month until I was given an invitation to partake because of my books."

You can find the full interviews with Rodriguez and each of the Hispanic and Latinx artists here.

For House Beautiful, journalist Christina Perez interviews eight Hispanic and Latinx designers about their culture, tradition and heritage -- and how each influences their work. Perez also writes about the immense variety of voices and forms of cultural expression within the Latinx and Hispanic communities.

“Those of us who self-identify as Hispanic or Latinx -- over 60.6 million in the U.S., according to the latest census -- know that we are also as diverse a population as they come," she writes. "Some of us have ties to the Caribbean; some to Mexico; some to South America; some to Spain, Africa, and beyond."

Landscape artist Fernando Wong, who is half Hispanic and half Chinese, shared how growing up in Panama never made him think too much about his own heritage. “We have Panamanians that are all colors on the color spectrum," he says. "We never asked, ‘Where are you from?’ because we’re all mixed.”

The designs Wong has created were inspired by the tropical forests of Panama and other Latin American countries he visited as a swimmer during his childhood. “I went to a lot of countries to compete: the Dominican Republic, Colombia, Venezuela, Chile, Mexico, Honduras, Argentina," he says. "It really showed me the diversity that’s out there, all the unique ways of life.”

Designer and TV host Evette Rios shares how one room -- the kitchen -- had a major impact on her. As with many Latinx families, it was a center of family activity. “When it came time for food prep, the table doubled as an additional workspace, and I remember all of us sitting around that table doing our part prepping a big or elaborate recipe,” she says.

Whether it’s head-turning designs from Oscar de la Renta, Cristóbal Balenciaga or Carolina Herrera, Latinx and Hispanics have had a major presence in the fashion world. Isabel Gonzalez Whitaker sat down with four designers for ELLE, who work across the fields of jewelry, textiles, hair, shoes, handbags and apparel.

Marina Larroudé, founder of luxury shoe and apparel line Larroudé, finds pride and joy in sourcing her products from Brazil, her home country. “For my line, I wanted the work to come from my home country, and when I got my first samples from Brazil, I started crying because they were perfect," she says. "If I had known, if there had been a way for people like me to see the level of work possible in Brazil, I would have started working with those factories years ago.”

Lulu Cordero, founder of hair product line Bomba Curls, speaks about the lack of Black Latinx and Afro-Latinx representation in the arts. “With the exception of icons Celia Cruz and Johnny Ventura, there was no one who looked like me," she recalls. "I never saw myself in U.S. Latin media outlets.” Seeing women like Naomi Campbell and Oprah Winfrey in English-language media made her feel seen. “For the first time in my life, I saw women on TV that were glamorous, educated, successful and looked like my mom and I.”

Full interviews with these four designers can be found here.

For Good Housekeeping, journalist Irina Gonzalez interviews six Latinx and Hispanics about what it is about the holidays that makes them so special. Camila Alves McConaughey, a Brazilian-born entrepreneur and founder of online community Women of Today, shares one of her most cherished Christmas traditions. When she was young, her grandfather dressed up as Santa Claus for the entertainment of the family. When she was old enough to figure out who Santa really was, McConaughey would put on the costume herself and hand out candy and toys to the street kids in her neighborhood.

“Now, my kids save up money throughout the year and then, before Christmas, we buy things for kids in need in Brazil, Africa and in the United States as well," she said. "That’s our version of what my grandfather did for our family.”

Food is a big part of holiday memories for María de La Luz Robledo, co-founder of Robledo Family Winery, a business she runs with her nine children. Robledo’s daughter, Vanessa, talks about one tradition in particular: “For Christmas, my mom’s favorite was cooking the tamales. We’d all go to my mom’s house and she cooks, sometimes three turkeys. The holidays are a downtime in our business, so that’s when she likes to entertain the most.”

For Cosmopolitan, writer Marjua Estevez spoke with some of the hottest young Latin names in music about their experiences in the industry, the idols they loved growing up and the impact that Latin music has made in American culture.

For Dominican singer-songwriter Amara La Negra, Celia Cruz was a big inspiration. She was the only mainstream artist that looked like her. “She was a Black Latina singer who made it worldwide," La Negra says. "Her music to this day plays everywhere.” For her, Latin music is like an amalgamation of sabor (flavor), rhythm, culture, sound and family. “It’s a melting pot of so many things that I believe make us beautiful,” she says.

Chart-topping Bachata singer-songwriter Prince Royce shares that Marc Anthony’s impact on salsa music was a major influence for him, and how modern Latin icons like Gloria Estefan, Ricky Martin, Jennifer Lopez and Enrique Iglesias expanded the reach of today's Latinx music in the U.S.

In the Heights star and Latin Grammy-nominated singer-songwriter Leslie Grace also shared how recent hits “Despacito” and “I Like It Like That” have changed the industry and opened doors for other Latin artists to hit the mainstream.

“People have become more curious to ask, ‘What does this word mean?’ or 'How do I dance this style?'" Grace says. "In pop culture today, there’s more inclusion. We’re using tropical sounds and even different percussive instruments that are very common in Latin music because of artists that have been able to bridge certain gaps.”

Puerto Rican food columnist Illyanna Maisonet interviewed six Latin chefs for Delishabout the impact of Latin cuisine on the U.S., the food that makes them feel connected to their culture and what it means to have a more diverse food world.

Bricia Lopez, co-owner of Guelaguetza in Los Angeles and author of Oaxaca: Home Cooking from the Heart of Mexico, said, “People don't make peanut butter and jelly sandwiches anymore -- they make quesadillas. Salsa outsells ketchup. Chipotle restaurant stock is worth a lot. And now people are asking for Mexican food from specific regions. That's the impact we've had on the country."

Mole, a thick, heavily spiced and flavorful sauce from Mexico’s state of Puebla, is the dish that defines Lopez. “It’s complex and evolves into so many things, like we do," she says. "Empanadas with Mole Amarillo or Mole Estofado that my mom made, which has almonds and olives.”

Nelson German, executive chef and owner of alaMar Kitchen & Bar and Sobre Mesa in Oakland, Calif., notes, “The best way to learn about someone's culture is through food. Food brings people together, sets the tone -- it's everything. Someone who's racist will eat some other culture's food and might appreciate that culture more; it makes them more open-minded. It brings Mexico and the Dominican Republic to the United States for people who don’t want to travel to those countries."

A note from the writer: As a proud Latinx-American and the child of immigrants, it truly warms my heart to see initiatives like The Power of Us hit the mainstream across such iconic publications as ELLE, Cosmopolitan and Delish, among others. Representation matters, and this is just the beginning of what Latinx and Hispanics are accomplishing doing in the U.S. and abroad.