Hearst Will Be “Everywhere”: NewFront News and Views 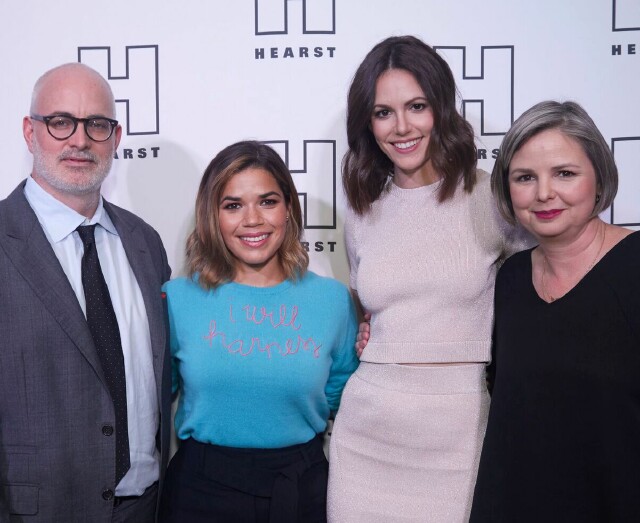 Venue:  Skylight Modern, the downstairs space on W. 27th St. that previously served as home base to NewFront originator Digitas, as well as a memorable CNN Upfront several years ago.  H as in Hearst marked the spot for this event, thanks to that letter posted on the street level entrance.  The layout was simple: stage in front, bar in the center and a group of exhibits scattered along the walls, showing off videos in a specific category, such as "Let's Eat" for food and "I Like What You're Wearing" for fashion. Under each screen in the "Let's Eat" section were drawers with appetizers inside.  Most of the attendees had to stand throughout the event, with just a few high tables and chairs to use near the stage.  Pre-show lighting was too dark at times, and much of the DJ music was pulsating techno tunes that unsettled the nerves.  Grades: 4 Jacks for the layout and execution of the exhibits, 2 Jacks for the overdone hipness.

Presentation:  All about each Hearst magazine using every digital and social media opportunity at its disposal to reach Millennials, teens and kids, a.k.a. the "Everywhere" strategy.  Each opportunity represents a direction for "our brands to define the cultural conversation of the moment," explained Hearst Digital Media President Troy Young.  Name the publication and companion Web site -- Cosmopolitan, Seventeen, Esquire, Good Housekeeping -- and somehow over the next 12 months, they will introduce one or more new digital initiatives, whether new video series, mobile content or customized features for Facebook and Snapchat.  Several magazines may team up for special partnerships, such as with Harness (Harness Your Energy to Power Change), a new Web outreach from actress/media entrepreneur America Ferrara (Ugly Betty, Superstore).  Grade: 3.5 Jacks (Pictured at top, left to right: Young, Ferrera, Cosmopolitan.com Editor Any Odell and Senior Vice President and Editorial Director of Hearst Magazines Kate Lewis.)

News:  Hearst will kick off a smart TV set and device initiative the second half of this year, putting together several video apps for Amazon Fire TV and Roku.  Which magazines will be involved and what content will be produced or showcased will be determined over the next few months. Separately, Delish.com, just two years old and drawing more than 17 million views a day for its cutting-edge food videos, will partner with FYI, A+E Network's lifestyle TV channel (which Hearst co-owns) , on viral eats-oriented series Delish TV this fall.  Missing from the conversation:  Esquire Network's upcoming conversion from linear diginet to smart TV/device service.  Grade: 3 Jacks 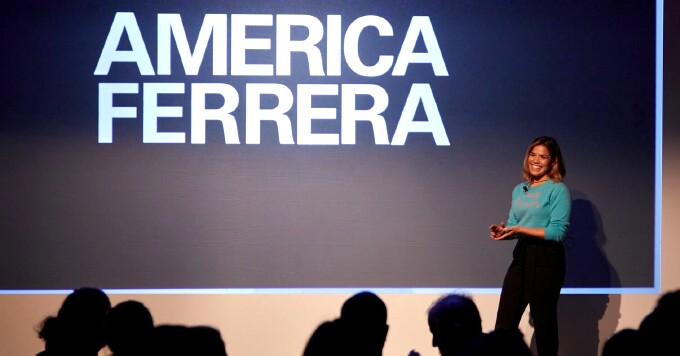 Star Time:  Ferrara, whose appearance was not headlined in advance, showcased her Harness project with passion and had a great time with the attendees afterward.  Grade: 3.5 Jacks

Cuisine:  Bountiful with drinks at the bar; skimpy on the appetizers.  If guests didn’t visit "Let's Eat" and pulled the drawers out, they had nothing to taste unless people with long thin boards or balloons brought food to them.  Best eat: yellowtail pumpkin crisps, muffin tin macaroni and cheese flavored with olive oil and panko break crumbs, and canoli cones (mini ice cream cones stuffed with while canoli filling and chocolate chips). Worst eats: the lack of eats!  Grade: 2 Jacks (Note: Cuisine ratings do not figure in the overall Jacks score.)

Overall Grade: 3 Jacks The presentation was short (under 30 minutes), snappy and demonstrated how widespread this company's digital movement is getting. Could have used more detail on when to expect the new content, and less moody lighting and techno-pop.