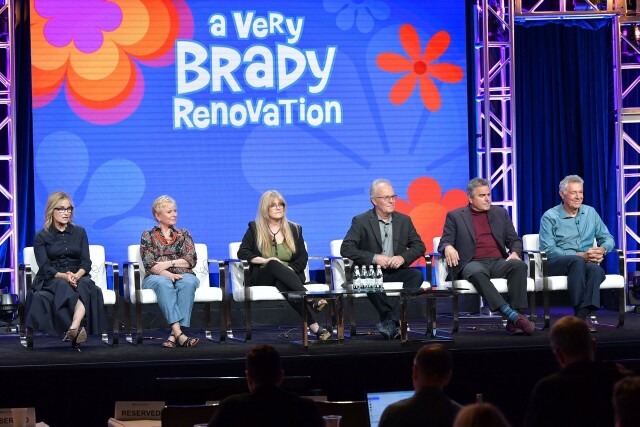 Beverly Hills, CA -- It was a very Brady reunion for television critics yesterday at HGTV’s TCA panel, as the network presented original Brady Bunch cast members Maureen McCormick (Marcia), Eve Plumb (Jan), Susan Olsen (Cindy), Mike Lookinland (Bobby), Christopher Knight (Peter) and Barry Williams (Greg) to promote their much-anticipated unscripted limited series A Very Brady Renovation.  In the series, debuting September 9th, the original “Brady kids” ably assist some of the network’s biggest design and renovation stars as they undertake the mammoth task of completely overhauling the iconic Studio City house (used only for exterior shots in the original Brady Bunch series) into an exact replica of the home they shared on a Paramount soundstage – complete with Formica countertops, retro fabrics, shag carpets, Jack and Jill bathrooms, fondue pots and more.  For many of the cast, it was the first time they’d ever stepped foot in the actual house, and even though it is one of the most photographed houses in America (reportedly second only to the White House).  “[While filming] we didn't know where the house was,” Knight admitted.  “I didn't learn where it was until 1996!

“One of the most interesting aspects of working on this project was learning just how connected the audience was to this house,” he continued.  “But we had no recollection of it.  I mean, it was placed as an establishing shot into the show.  I don't think anyone else during the period the show was being filmed knew where it was, either.”

“I think it was more exciting for me to return to the house this time on our first day of production than it was the first time I ever saw it,” added Lookinland.  “I didn't know where the house was until 1990.” 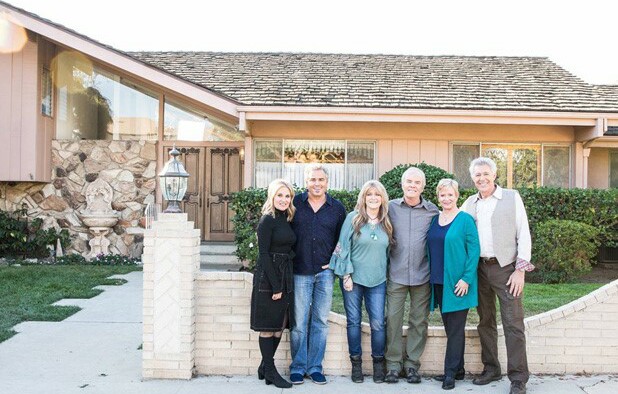 Williams was the only Brady boy ever to have visited the famed home, much to his surprise.  “After our original show was canceled, I was invited to lunch by a mutual friend [of the owner],” he recalled.  But he wasn’t told where he was going.  “I went into the house and we're having lunch and they're all looking at me, laughing and asking, ‘Doesn't this remind you of something?’  I'm looking around going, ‘No’.  They said, ‘Well, don't you know where you are?’  I said, ‘No’.  They said, ‘Well, you're in the Brady house.’  They had to walk me back outside to look at the view we see on television for me to make the connection because the inside resembled it not at all.”

“I visited the house in 2011,” Olsen said.  “There was a busload of tourists in front of it.  But I got the honor of going to the house in the Wienermobile.  My friend, Allee Willis, called me up one night and said, ‘I have the Wienermobile tomorrow’, and I get to invite two friends.  We're in the Wienermobile, riding along, and she said, ‘We're very close to the Brady Bunch house.’  I said, ‘I've never been there.’   She goes, ‘Okay.  That's where we're going.’  She says, to her dying day, she'll never forget the look on all the tourists' faces when the Wienermobile pulled up and Cindy Brady got out.”

Despite not knowing its locale, or having ever been inside, each member of the cast (like millions of their fans) had an affinity for the residential home that now, following the make-over, stands as a living testament to the show.  “I had a connection to it simply because, and not to sound like a bad sport about things, I was a very literal child and I looked at that house and thought to myself, ‘No way.  That could never be the set.  It's a one-story house!” Olsen laughed.

“I had such an affinity for this house just because in some sort of a way I'm a fan of it, just like America,” shared McCormick.  “I have that same love for this house and when I was told that I could be a part of this and that they were going to really let us demolish things and then rebuild them, I was like, ‘Oh gosh … it’s the chance of a lifetime.” 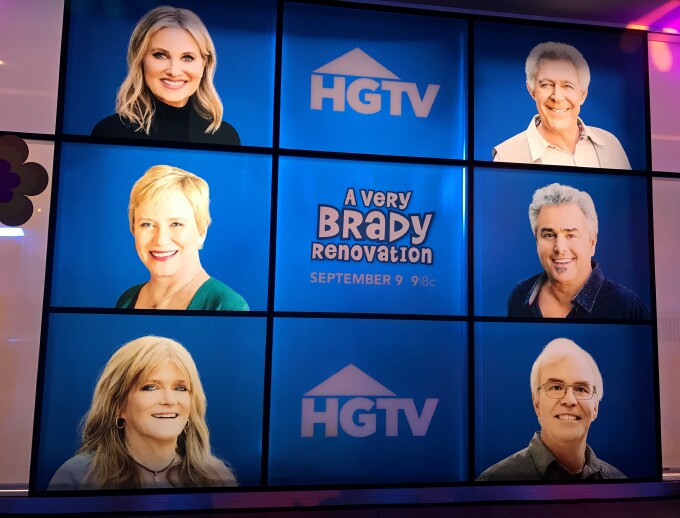 The HGTV reunion at TCA marked the first time since July 2004 that the Brady "kids" had united for a Television Critics Association panel.  Organized by TV Land, they were all on hand to promote the network’s 35th anniversary marathon and reunion special, Still Brady After All These Years.  Now, 15 years later, reuniting to for A Very Brady Renovation seemed the most fitting way to celebrate the show’s 50th Anniversary.  While the cast remains close, due to many being spread all over the country working on other endeavors, such reunions are rare these days.

"So many elements had to come together to make this thing work,” shared Williams.  “It's almost unfathomable.  We've had great relationships our entire lives, but not all together at the same time. September 26th is the 50th anniversary of our premiere (it debuted in 1969).  This show starts September 9th, so it all ends up coinciding with the 50th anniversary.

“One of the other things that's nice about recalling [the] experience is we are the surviving cast members and can feel the presence of Robert Reed, Florence Henderson and Ann B.  Davis in the rooms re-created through memories and the episodes themselves,” he added.  “Through clips, we can share their presence and what a significant part of our show they are and were.  It's a nice way to keep them introduced.”

A Very Brady Renovation will debut September 9 on HGTV.