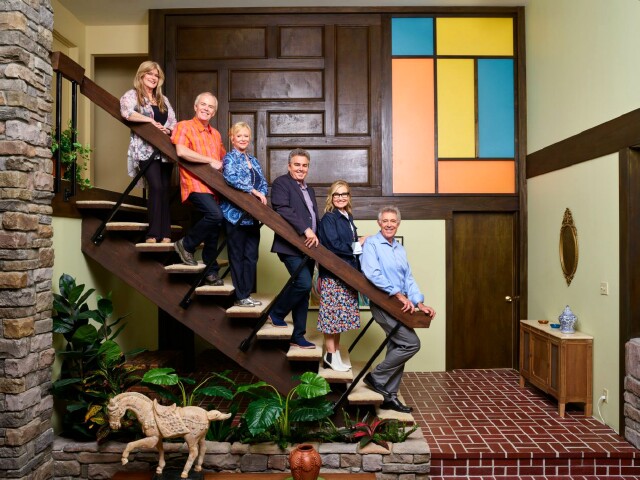 Tonight’s highly anticipated premiere of HGTV’s A Very Brady Renovation reunites the six surviving members of The Brady Bunch, one of America’s most beloved sitcoms.  The series, which celebrates the 50th anniversary of Mike Brady and Carol Martin uniting to form the blended bunch, chronicles a mammoth undertaking by some of HGTV’s most prolific talent, along with the actors who played the Brady kids.  Working together, they transformed the iconic Studio City, CA, house used as an establishing shot in The Brady Bunch into a fully functioning picture-perfect replica of the home as it was seen on TV.

The interiors of the Brady home were situated on Stage 5 on the Paramount lot, with most of the TV family having no idea where the real house stood or ever stepping foot in it.  But that all changed after (above, top to bottom) Susan Olsen (Cindy), Mike Lookinland (Bobby), Eve Plumb (Jan), Christopher Knight (Peter), Maureen McCormick (Marcia) and Barry Williams (Greg) collectively signed on for the renovation project.  The show also marks the first time since 1981’s The Brady Girls Get Married TV movie (that resulted in the short-lived spin-off NBC series The Brady Brides) that the six original Brady kids have shared the screen in a series.  While many returned for ABC’s Brady Bunch Variety Hour in 1977, the 1988 TV movie A Very Brady Christmas and the six-episode dramatic series The Bradys on CBS, each of those productions lacked one original cast member. 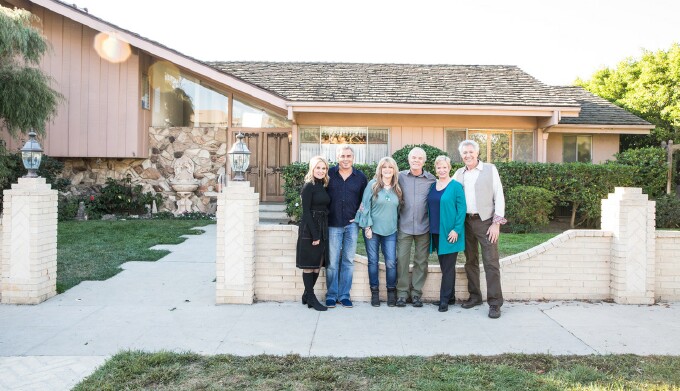 While A Very Brady Renovation is a joyous and fitting homage to everything Brady, a series of losses prevented the entire “family” from participating.  We lost Robert Reed (Mike Brady) in 1992, Ann B. Davis (housekeeper Alice Nelson) in 2014 and Florence Henderson (Carol Brady, who had been in every Brady incarnation) in 2016.  However, each surviving Brady admitted feeling the presences of their missing castmates during the renovation process.

“My wife Cara thinks Florence was out there actually helping,” Christopher Knight shared with MediaVillage during an exclusive interview at a special event last week that found many wide-eyed Boomer-age reporters exploring every inch of the house they all grew up with.  “I think she was right.  We were doing some digital promotion stuff at the house, and it hit Maureen hard, which got Eve going, too.  Mike helped to build the master bedroom, and when it was revealed to all of us ... [just] walking through that room hit them hard.

“The reason is, it represents Florence and Bob,” he continued.  “I realized how we've all been altered because of our time with them.  [The room] is a fine representation and a really special place, so yeah, I think Florence probably is doing something.  It started me thinking how they were the first couple on television allowed to be shown in the same bed.  They couldn't have a toilet (censorship at the time prevented it), yet they could share a bed!”

“[Florence] had a huge impact on me throughout my life,” Maureen McCormick told me.   “So did her family, who I've always considered my family.  She had more of an impact on me as an adult than ever.  I saw her a few days before she passed and still have all these texts from her that I will never ever delete.  Florence taught me a lot about joy.   She lived her life with joy, was always gracious, and embraced life and people.  I'm so happy now that I’ll have those lessons forever.  I'm thankful and grateful every day for her teaching me.  She would have loved this.”  (Pictured below, top to bottom:  Jasmine Roth of Hidden Potential, Karen E. Laine and Mina Starsiak Hawk of Good Bones, Susan Olsen, Mike Lookinland, Eve Plumb, Christopher Knight, Maureen McCormick, Barry Williams, Leanne Ford and Steve Ford of Restored by the Fords, Lara Spencer of Flea Market Flip and Drew and Jonathan Scott of Property Brothers.) 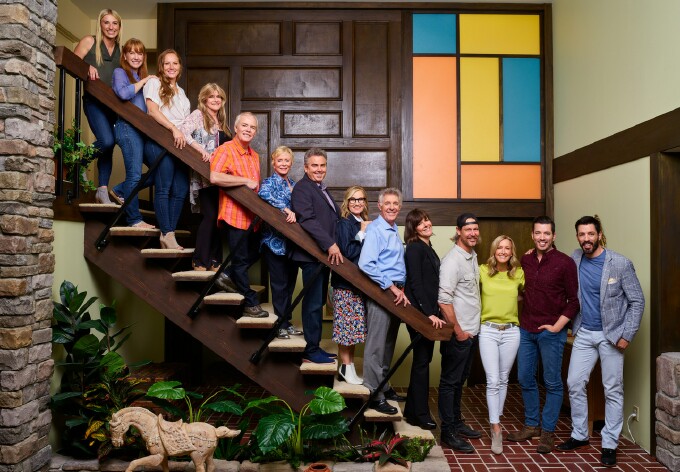 “I really do feel that Florence is a part of this,” Barry Williams said of his TV mom.  “She was a very strong presence, very generous and very supportive to all of us.  Her daughter was a part of it.  Florence, Ann B. and Bob are all represented in some way. When those memories come back, and they asked us what happened in various scenes (on the original show), their presence was really felt.  There were instances we felt they were with us because when we do a project like this collectively, they’re still with us.  It's because we have been together for so many years.”

“Barry is very correct in saying how generous Florence was,” concurred Susan Olsen.  “I know she would appreciate how much she is missed.  Ann B. Davis is also missed, and I love what [Barry] and everyone else involved did with Alice's bedroom.  To me, that's really poignant.  There's an 8x10 of Sherwood Schwartz (the show’s creator) framed on [Alice’s] dresser, like he's the mystery man in her life and I know she really liked him.  But there's no picture of Sam the Butcher.  Allan Melvin [who played him] should be there, or maybe a picture of Magilla Gorilla, because Allan voiced him.

“Oh, and Bob Reed should have been there, too,” she added.  “Even though he hated doing the show, he loved the family and would never have not done a reunion.  He was also super handy!  That guy did the wallpapering and painting in his own home, so he would have gotten his hands dirty.  Maureen started crying looked at the two chairs in the living room, saying, ‘Bob and Florence should be sitting there as Alice walks in.’”

“Our memories are of the making of the show and not the finished product,” Mike Lookinland said.  “I remembered Bob behind the kitchen counter joking around and having a good time.”

The Brady "kids" weren't the only ones feeling nostalgic that night.  At one point during the press event I couldn't believe where I found myself standing.  For all of us, the real star of A Very Brady Renovation is the house and the memories it holds for all of us. 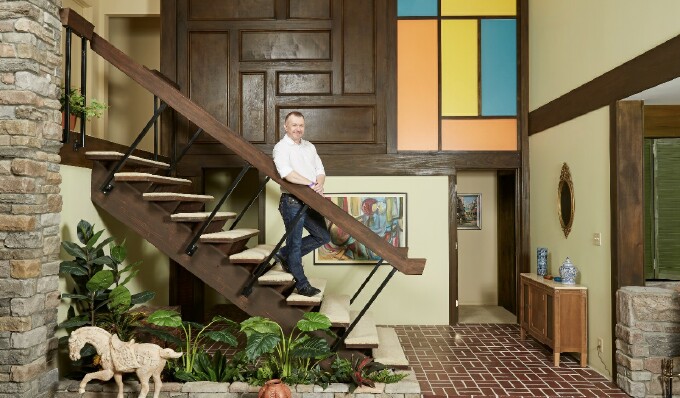 A Very Brady Renovationis telecast Mondays at 9 p.m. on HGTV.