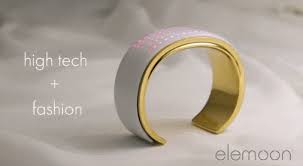 With Fashion Week unfolding in New York and Apple unveiling its high-tech and high fashion new products, it's a relevant time to recognize the convergence of media, marketing, mobile technology, commerce and fashion. Kickstarter is home to several high fashion tech advances, including a luxury leather wallet that knows where you left your phone and a colorful bracelet that checks your texts, e-mail and social media. High-tech fashion wearables are big business. In addition to Apple and emerging entrepreneurs with good ideas, Timex, Samsung, Google and Amazon are all racing to deliver smart high fashion wearable devices.

A line of fine leather wallets from the new brand StreetSmart surpassed its funding goal in a Kickstarter that ended September 5th. The wallets feature BlueTooth BLE, a GPS tracker and a phone charger. The campaign attracted 315 backers and raised $36,237. The creators, Stephen Lamarre and Samuel 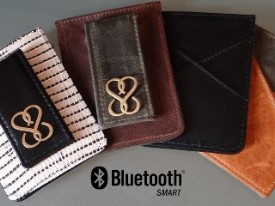 Pofcher, are currently college students and designed the wallet after one of them lost his phone. The StreetSmart wallet comes with a simple locator app that the owner installs on his Android device or iPhone.

An even bigger success is the Elemoon bracelet, which has already surpassed its $100,000 goal and still has 16 days of funding. This luminous smart bracelet changes colors to match what you are wearing and can alert you to important calls or texts. CEO and founder Jing Zhou is an experienced entrepreneur whose previous projects include creating and selling a mobile ad company in China.

Up Close and Personal with Proximity Marketing

With proximity marketing and Apple's NearField Communications (NFC), marketers will send geosynchronous messages and offers to wearers at malls, on the street and in restaurants. The StreetSmart wallet includes the same BLE technology that is already used in Apple's iBeacon technology. Just as iBeacon is used by some retailers to offer coupons and discounts to customers that are already in the store, as wearables evolve, they can offer the same sort of instant contact. Apple's goal is to extend NFC and iBeacon from several thousand retailers to several million, and it appears likely they will succeed. The new AppleTech smart purchase technology, in association with banks and retailers, promises to serve both consumers and retailers, as well as marketers who can communicate directly to consumers at the point of purchase. (A consortium of banks just changed the name of their smart purchase technology from ISIS to SoftCard. I wonder why?)

Smart watches, smart bracelets and smart wallets will further remove payment friction and enhance impulse buys. By incorporating sponsored events, special offers for local attractions and hotel deals, apps incorporated into the wearables can be both valuable for the wearer and for marketers looking to expand their reach. An activity tracker is being developed as part of the high-fashion Elemoon bracelet. The app will tie in with the user's iPhone; the full range of functions is still being developed. 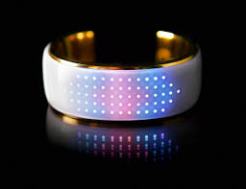 beauty. "They lack personality and sex appeal, plus they aren't very pretty. It's clear they weren't designed for women," she told Tech in Asia. After talking to friends and test marketing a different idea for a social app, she determined that women were a viable audience. She began developing the LED driven bracelet. According to Time,women account for 58% of retail dollars and 45% of money spent on consumer electronics. This is an audience that has not had many tech products directly built for them, and the successful Elemoon campaign shows this sector's promise.

Although Google expects mobile searches to surpass desktop search this year, only about 57% of top brands currently have sites that are mobile friendly. Wearables will accelerate both mobile site compatibility, app development and mobile advertising and marketing. They promise to further advance the revenues and value of Facebook and other social media that can track users interests, needs and desires.