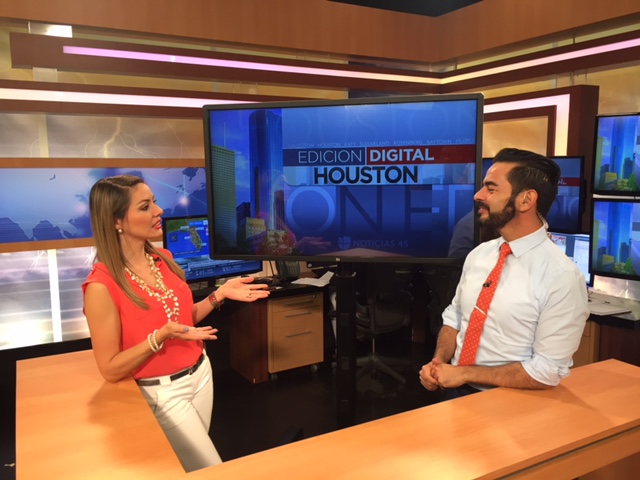 Half-hour news at noon has been a fixture at many broadcast stations for years, in some cases decades.  Until last fall, however, that was not the case for the broadcast networks, despite the existence of cable news channels with live news or commentary programming at that hour.  That status transformed nine months ago when Univision launched Noticiero Univision Edición Digital, a half-hour of noontime news unlike any programmed by a broadcast net in any time period.

Informal, free-wheeling and designed from the get-go to involve an audience of social media-using Latino Millennials, Edición Digital has generated a substantial audience in quick order while breaking new territory in what a national newscast can do.  Over 6.9 million people watch Edición Digital per month, according to Univision-provided statistics.  By the end of December, the program was averaging 580,000 total viewers each weekday.  Two months later, total viewers climbed to 785,000 viewers, up 35% from December.  Among Adults 18-34 -- the Latino Millennial audience Univision designed this newscast for -- average viewership went from 117,000 last December to 170,000 two months later, up 46%. 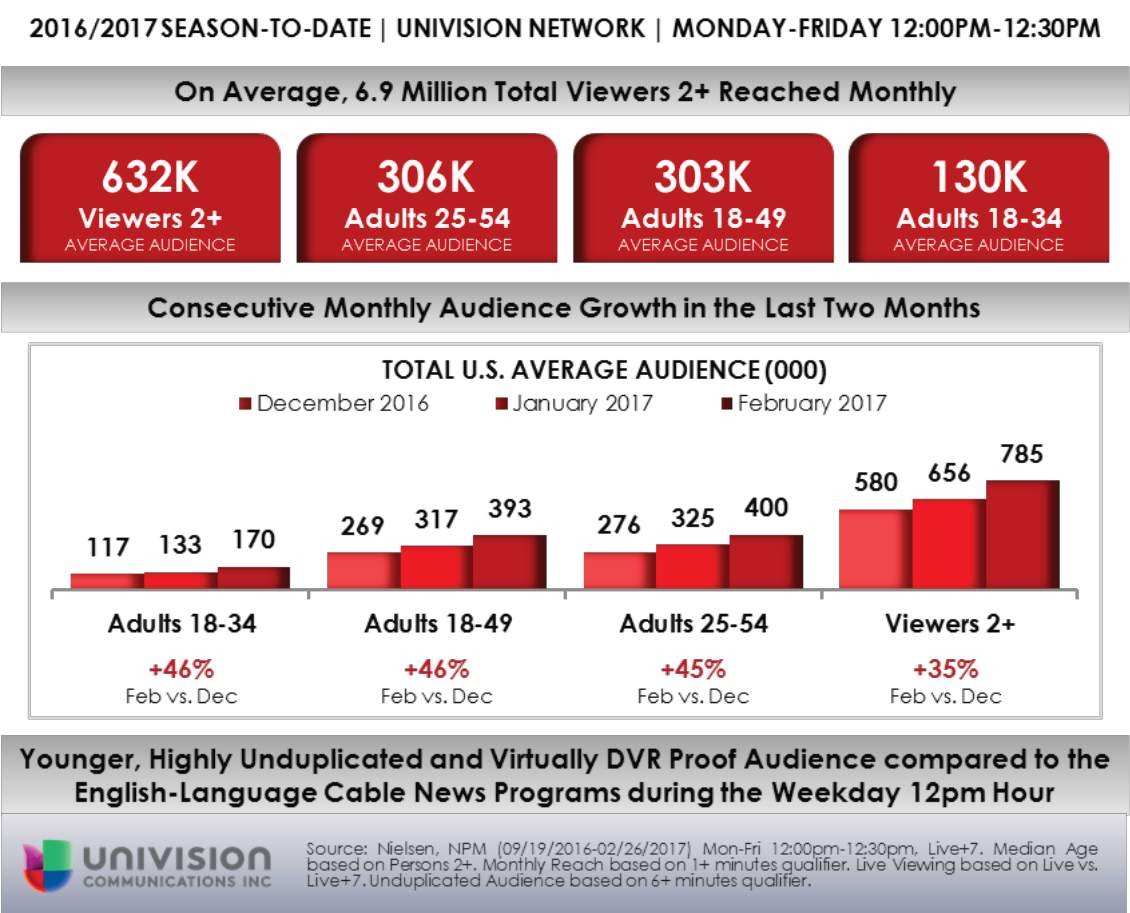 "Everything is coming together," says Patsy Loris, News' Executive Vice President and Executive News Director.  "We're reaching people who watch or receive news differently, watching from work, and connecting to information from digital or mobile platforms."

You could label Edición Digital the mother of all simulcast programming.  When the program goes live from Univision's spacious newsroom in Miami, it shows up live on the network's Web site (Univision.com) and smartphone/tablet application (Univision Now), YouTube and Facebook Live. Co-anchors Carolina Sarassa and Javier Olivares deliver the news from various portions of the newsroom, often seen moving from one space to another.  The format is ultra-flexible, catering to whatever the major stories of the day are.  Sometimes a number of items are covered during the half-hour.  At other times, a breaking news story takes up the entire 30 minutes.  Throughout Edición Digital, viewers are invited to comment on the stories they're watching and Facebook or Twitter postings (often with viewer headshots) are placed at the bottom of the screen.  They also can post greetings to the co-anchors and reporters.  One episode last week presented greetings from Barcelona, Spain and Colombia.

That episode led off with the latest on tropical storm Cindy impacting the Gulf Coast and the hot weather streak in the Southwest (including a live report from Pedro Rojas in Texas), then recapped in quick order the resignation of Uber's CEO and the latest immigration news.  This was followed by an extended segment on National Selfie Day; Sarassa and Olivares picked up a selfie stick, posed for a shot, and projected it on the newsroom's video wall, then detailed a Brigham Young University study on how students there use selfies.  Before wrapping up, the co-anchors clicked another selfie with an entertainer visiting the newsroom.

Formality is nowhere to be found on Edición Digital, whether how the anchors look on-camera or the size and placement of graphics on-screen (big, clear and upper case).  Stories are presented in a conversational manner, easy to grasp but not dumbed-down.  "The research we did before organizing this program suggested that Millennials want a simple explanation of news, delivered by people they can relate with who are not confined to a desk," explains Loris.  "It comes across as a fresh, forward-looking presentation," adds Chris Peña, Univision's Senior Vice President of News, Local Media.  "It's more emotionally connected to this audience than other newscasts."

Univision launched its noontime venture in experimental fashion, going forward a few months after news management came up with the idea.  With a fast launch date, there was little time to pitch advertisers.  Nine months later, though, a wide variety of sponsors are filling the two commercial breaks in each half-hour.  A little monitoring revealed Procter & Gamble brands (Crest toothpaste and Dawn dishwashing liquid on the newscast I watched live last week), Sprint, Holiday Inn and International House of Pancakes.  A number of Web sites that have avoided Spanish-language network advertising in the past also are buying time, including Trivago.

The early success of Edición Digital has carried over to a procession of local half-hour adaptations that start immediately after the network presentation.  Univision affiliates in New York, California (statewide, broadcasting from Los Angeles affiliate KMEX-TV), Miami, Dallas and Houston started up earlier this spring. (That's Laura Sierra and Osvaldo Corral of Edición Digital Houston pictured at top.) All emanate from their station newsrooms, feature young, informal-dressing anchorpeople and simulcast on affiliate Web sites and social media.  Some editions provide local follow-up to one or more stories covered by Noticiero Univision Edición Digital the previous 30 minutes.  The Uber resignation and National Selfie Day were covered extensively on the New York newscast.

In a matter of weeks, the Los Angeles, Houston and Dallas versions became the top midday local news among adults 18-49 (in any language). That encouraged Univision to fast-track development of local noon newscasts elsewhere.  Chicago and San Antonio were the latest to join the noon news-offering lineup as of June 26th, with two unique twists: In both markets, radio simulcasts on Univision Radio affiliates were implemented, and in San Antonio, the co-anchors deliver their newscast mixing English with Spanish.  What's more, two radio stations in the city are simulcasting this Edición Digital offshoot -- one Spanish-language, the other English-language.

Loris believes a national Edición Digital radio simulcast down the road is doable, along with expanding the live simulcast to smart TV sets and devices like Roku, Apple TV and Amazon Fire TV.  "I'm sure our strategy team is on the case," she adds.  In time, expanding to weekends could happen, as well as launching similar newscasts in other time periods.  Both Loris and Peña see a future where no matter what, elements of Edicion can be incorporated into the network's long-running early and late-evening newscasts.

"How often do you hear media companies say they want to be everywhere, on every platform, and not follow through on that promise?" Peña asks.  "We are."