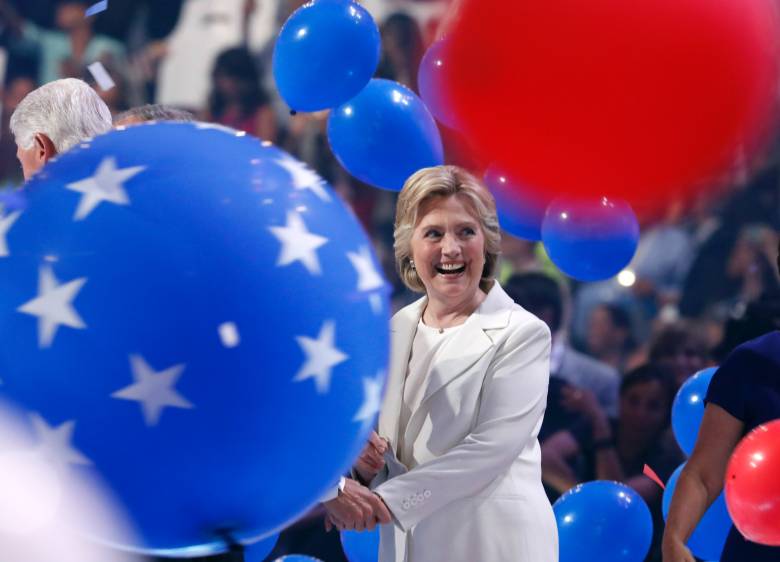 Inspired by Jack Myers' book The Future of Men: Masculinity in the Twenty-First Century, this is a weekly blog focused on gender equality. In this edition, Hillary Clinton accepts historic nomination, advertisers may be ignoring childless women, women over 40 are having more kids than ever and even performance reviews have gender bias.

"When there are no ceilings, the sky's the limit." Last Thursday night, Hillary Clinton became the first woman to accept a major party nomination for the US presidency, ending the evening with a historic speech. After making a case against Republican nominee Donald Trump, she declared, "Standing here as my mother's daughter and my daughter's mother, I'm so happy this day has come. I'm happy for grandmothers and little girls and everyone in between. I'm happy for boys and men. Because when any barrier falls in America, it clears the way for everyone." Read Clinton's full speech here.

According to the most recent census figures, nearly half of women aged 15 to 44 do not have children -- the highest percentage of childless women since the Census started recording fertility rates, Slate reports. But are advertisers ignoring them? Historically, advertisers have targeted mothers because they are the largest consumer group in the US, making $3.4 trillion in spending decisions in 2015. While some advertisers like Campbell's and Chase have embraced single moms in their advertisements, childless women are still underrepresented. In a survey conducted by Saatchi and Saatchi, which included over 8,000 moms from around the globe, the majority were frustrated by outdated motherhood tropes in advertising and resented the fact that motherhood is often portrayed as a job. Research also shows that childless women actually spend more on certain items than moms, such as beauty products (twice as much) and even groceries (35 percent more). They also spend 60 percent more time travelling internationally. While some brands -- most notably Dove -- have embraced female empowerment, most have yet to tap into the growing market.

Women Over 40 are Having More Babies than Women Under 20

For the first time in over 70 years, women over 40 years old are having more children than women under 20 years old in England and Wales, according to recent census data. Teenage pregnancy has been in a long-term decline, while pregnancy rates have soared in older age groups, the BBC reports. This rise can be attributed to several factors: First, advancements in fertility treatments have made it easier for older women to conceive, and second, women's higher education rates have skyrocketed, meaning they are more likely to focus on their careers before having children. "The trend towards older motherhood is here to stay, and there are many understandable reasons why women today are waiting longer to start or expand their families than those in previous decades," the British Pregnancy Advisory Service commented.

In Performance Reviews, Men Get Clearer Advice than Women

Is there gender bias in performance reviews? In a recent study that looked at three tech companies and a professional services firm, Stanford researchers found that in performance reviews, while men receive clear, actionable advice for improvement feedback to women is often vague and stereotypical. The researchers concluded that this difference is both a symptom of and a cause to women's underrepresentation in executive and C-Suite roles, Slate reports. They wrote in Harvard Business review, "Our analysis found that developmental feedback for men was more likely to be linked to business outcomes (60% for men versus 40% for women) ... Clearly, these dynamics can disadvantage women at promotion time. Without specific, documented business accomplishments, it is difficult for a manager to make the case for advancement." In order to start solving this problem, which they noted stems from unconscious bias, the researchers urged employers to outline the criteria of reviews in advance and make sure that all reviews are similar in length.

Trump's Gender Paradox: When Men are Feminists for Their Daughters But Not for Their Wives

The GE Executive Pulling Women Up the Ladder with Her

First "Wonder Woman" Trailer Will Kick Your Ass, and You'll Like It