HISTORY Plays Carnegie Hall: Clinton, Bush, and More Talk Then, Now, and Next 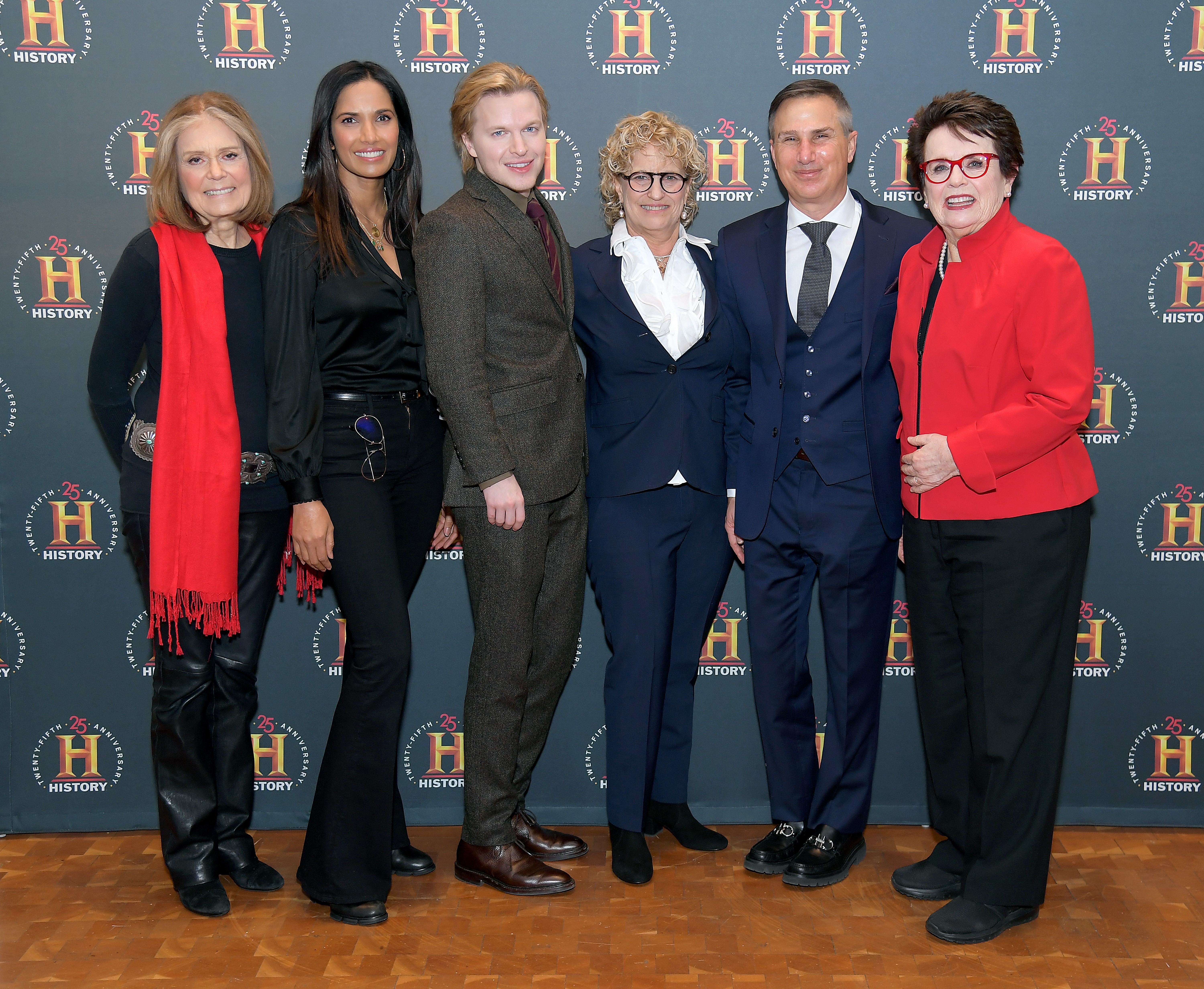 If you could gather two former U.S. presidents, two of the most prominent players in the women's rights movement, a Pulitzer Prize-winning author, a MacArthur Fellow, a major movie star, a popular talk show host, and, one of the Emmy-winningest newsmen of our day all in one room for one day, that would be, well, historic, right? That's just who HISTORY Channel gathered — and more — for its kick-off HISTORY Talks 2020 event, located at none other than Carnegie Hall.

The event — which culminated with author/historian Doris Kearns Goodwin interviewing Presidents Bill Clinton and George W. Bush — had a wow-factor of "legends and luminaries" in every panel discussion. Each session offered a perspective on today through a lens of history, and each coaxed the audience into smiling, pondering, and even weeping at times.

The first panel featured women's history makers — Gloria Steinem, sports legend Billie Jean King, Variety editor-in-chief Claudia Eller, and celebrity chef and ACLU ambassador Padma Lakshmi — answering questions from #MeToo investigative journalist and session moderator Ronan Farrow. One "then and now" moment was reflected in an aside from Steinem, who said, "I was 'Miss' Steinem even at Ms. Magazine because back then you were defined by your title. The good thing about being old is that you remember when things were worse."

Eller shared a more recent anecdote that is one for the contemporary history books: This past year she was famously stopped on the Cannes red carpet for wearing flats versus heels. She also commented on the evolution of journalism, saying she has never allowed business — or the influence of advertisers — to interfere with sharing the truth. Then she commended Farrow's intrepid reporting, which contributed to the charges against Harvey Weinstein, sparking rousing applause from the audience.

King pointed out that, even after gaining worldwide awareness for women's tennis, it's only recently that top female players such as Serena Williams earn prize purses equal to that of their male counterparts. She used the dais to remind women to "get the money because that gives you power, and power helps change laws faster."

Finally, Lakshmi doubled down on the human rights message she shared during her recent appearance on The Daily Show — hosted by fellow HISTORY Talks panelist Trevor Noah: "If the constitution says we are all equal under the law, that means everyone, goddamnit."

White House photographer Pete Souza's stunning photos of the Reagans and the Obamas spoke a thousand words and led to tears of nostalgia from many in the audience. But the next panel, featuring former FCC chairman, now president of the NCTA, Michael Powell, holds specific interest for MediaVillage readers. Powell noted that aside from the clear challenge to make strides in privacy policies, "we still have enormous technological leadership in the United States that we should be proud of. But I worry that we only allow that to evolve based on profit and commercial incentive..., that we don't have a slightly more globalist perspective of how we can be a great empire in the Information Age in the way we were in the Industrial Age ... while China is pursuing a 2025 technological strategy that is stunning in its ambition."

Moderator Walter Isaacson pointed out that America's leadership after World War II was not just economic, but also based on technology and creativity — and led to innovations such as the computer and networking. "So, what does a leader do now to spark innovation?" he asked Retired General Stanley McChrystal. The answer? To make greater national efforts to support science programs. McChrystal explained: "There was an era when many of the technological advances came from the government through defense ... and migrated to private industry.... Now, there's just not the same level of research and development funding."

In another conversation punctuated by "then and now," Ta-Nehisi Coates, a MacArthur Fellow and author of Marvel Comics' The Black Panther and Captain America, described an overabundance of funding for some projects and technologies. Coates spent several minutes vulnerably sharing his embarrassment, at times, over the contrast between his modest upbringing and his financial success today. And Matthew McConaughey explained his personal evolution as he walked away from more commercial and lucrative film projects to subjects that matter more — whether for the big or smaller screen.

The panel focused on news — which included former Time managing editor Nancy Gibbs, former Nightlineanchor Ted Koppel, and The Daily Show's Trevor Noah — was described in the program as: "In these times of information overload, late-night television hosts have joined nightly news anchors and newsroom editors as our purveyors of truth and justice in a complicated world...." So, I thought it best to ask my seatmate at the event Erich Prince, the columnist behind MediaVillage's News on the Record, for his takeaways:

"At a time of marked and seemingly all-consuming partisanship, the news panel made an effort to understand the news media's role in it all. The panel was remarkably self-reflective and avoided casting blame on media's viewers and readers for diminished trust in their industry. Instead, they discussed how media companies' various business incentives might have had something to do with the record number of Americans dissatisfied by the news media. Clicks and ratings, after all, are paramount, and — at least in the short term — both are very responsive to the sensational. And, as is often the case in good faith debates or discussions, the panelists found themselves agreeing with one another far more often than disagreeing.

"But, as the panelists quickly observed, it is not so much that Americans have blanket opposition to all news outlets; rather, they have their favorite sources and dislike others. To this point, the audience was — by a show of claps — asked who regularly listened to Rush Limbaugh, and only a clap or two in the entire venue could be heard. Conversely, much of the room applauded when asked, "Who regularly listens to MSNBC or NPR?" Again, like in politics, regional and demographic differences in media consumption are much of the story. And, in many respects, this intersected with a major theme of the day's events: the need to understand the perspectives of fellow Americans at a time when our sense of division is palpable.

"As was fitting of a HISTORY event, the news panel took the time to evaluate how the news media has changed over the years. Thus, the intergenerational composition of the panel went a long way. (Even moderator Dan Abrams remarked how Ted Koppel was one of the inspirations for his own career in journalism.) As such, Koppel indicated that the Internet was among the primary factors in changing how journalism is done. Needless to say, Trevor Noah's entire platform is an obvious departure from the news media of decades past.

"Despite their obvious differences in age and medium of journalism, however, Koppel and Noah found themselves agreeing on far more than they disagreed on, and they both invoked the international angle of how journalism is done around the world; Koppel had notably reported on conditions in Noah's home country of South Africa during Apartheid."

In fact, from the (off-the-record, sorry) conversation between Presidents Clinton and Bush (who are now famous friends with an almost shtick-like camaraderie as foil for their serious insights), to film actors and politicians to print journalists and late-night comedians — and across generations — the panelists frequently found themselves in agreement. As Prince put it, in our age of division, the very presence of these history-makers (and their civil, thoughtful conversation) was, in many cases, living proof of our need to form unity and common agreement.

Don't stop now! Stay in the know on A+E Networks and HISTORY with more from AETNINSITES.com.