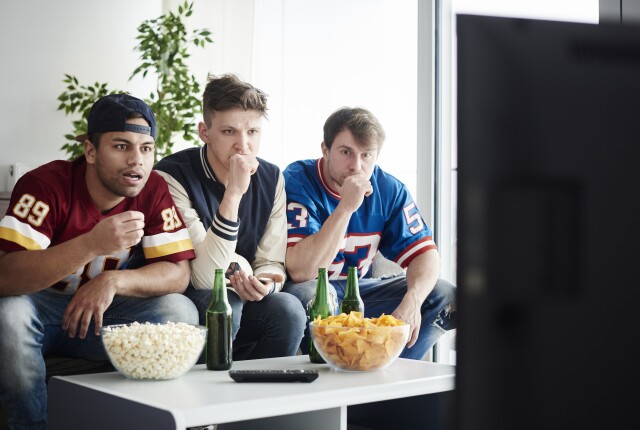 Once upon a time, there was only one way to catch sports highlights on television. At the end of your local 11 o'clock newscast, the good-natured local sports guy would come on and tell you what happened with your hometown teams that night. If there was a big story going on -- say, a pennant race, the Triple Crown, Grand Slam or the Masters -- he'd probably talk about that too, but quickly. After all, he only had a few minutes. Then, on September 7, 1979 -- 42 years ago today -- ESPN went on the air. And sports broadcasting was changed forever.

"If you're a fan … what you'll see in the next few minutes, hours and day to follow may convince you that you've gone to sports heaven," intoned Lee Leonard, ESPN's first on-air anchor, when the new network went live. "Beyond that blue horizon is a limitless world of sports, and right now you're standing on the edge of tomorrow. Sports 24 hours a day, seven days a week, with ESPN, the total sports cable network."

Then he announced the first programming: a college football preview, followed by a pair of professional slow-pitch softball games.

ESPN was dreamt up by a man named Bill Rasmussen. In 1978, he had been a communications director for the New England Whalers, a team in the short-lived World Hockey Association (WHA). After the Whalers didn't make the 1978 WHA finals, he found himself out of a job. A onetime local sports anchor in Boston, Rasmussen had the idea to launch a cable channel focused on Connecticut college sports, the stuff that didn't get covered in those precious few minutes on the late local news in Boston and New York.

As Rasmussen was meeting with cable system owners, someone suggested that he look into the then-new technology of satellites. So, he called RCA, which turned out to have plenty of available space on Satcom I, its communications satellite. An RCA rep explained the available options, and Bill's son and co-founder, Scott Rasmussen, crunched the numbers. It made more sense to lease 24 hours of space rather than a small amount of time for a highlights show. The all-day sports network was born.

The Rasmussens now needed to figure out how to program it. There were no other 24-hour cable networks. CNN wouldn't launch till the next year, and MTV would be the year after. HBO played movies for only a few hours each day. Over a long summer car ride, father and son came up with the idea for SportsCenter.

But in 1980, ESPN had two breakthroughs. First, it got the rights to broadcast the early rounds of the NCAA basketball tournament, back when only the Final Four was deemed worthy of national attention by NBC. Second, ESPN convinced the NFL to let them broadcast the league's draft, which had never been seen as a high-stakes, high-profile event.

ESPN was starting to create programming that sports fans would care about. It was also building relationships with sports leagues. In 1987, it started carrying not just the NFL draft but also live NFL games. In 1990, it added MLB. In fact, by the 1990s, the cable network was a multimedia powerhouse. There were multiple networks. There were international networks. There was ESPN The Magazine. There was even ESPN Zone, a chain of themed restaurants across the country.

And there was also, of course, "the big show:" SportsCenter. In its earliest days, anchor Chris Berman, with his nicknames and running jokes, gave SportsCenter its zany feel. But it wasn't until Dan Patrick and Keith Olbermann became co-anchors in 1992 that the show reached its peak of public influence with their masterful mix of sports news coverage and self-mockery for covering sports news. There were jokes and references, taglines and gags. Patrick and Olbermann were, you might say, en fuego. In some ways, the ESPN show was a bigger cultural touchstone than the sports it covered. Aaron Sorkin's TV series, Sports Night, was based on it. The Ringer writer Bryan Curtis has argued that Patrick and Olbermann, who split up in 1997, set the template for all the mock news programming that followed with Jon Stewart, John Oliver and all the indignant comic truth tellers.

But SportsCenter did something tougher: it didn't just get to make fun of the news, it reported it, too.

Indeed, ESPN didn't just change sports broadcasting; it changed both sports and broadcasting. On its 40th birthday, Chicago Tribune media critic Phil Rosenthal listed all its impacts: ESPN was the first place where people across the country could see games from across the country. In order to fill ESPN's schedule, football games moved to midweek and starting times moved to odd hours. And ESPN is the reason sports fans care about things like drafts and trading deadlines. Snowboarding and skateboarding are Olympic sports because of ESPN and its X Games. And if you've ever wondered why there are so many college-football bowl games, it's because ESPN owns more than a dozen of them.

Ultimately, ESPN is probably why being a sports fan today is so much fun. When it first began, it was the Entertainment and Sports Programming Network. Entertainment has always been the goal. ESPN is, simply, a sports fan.