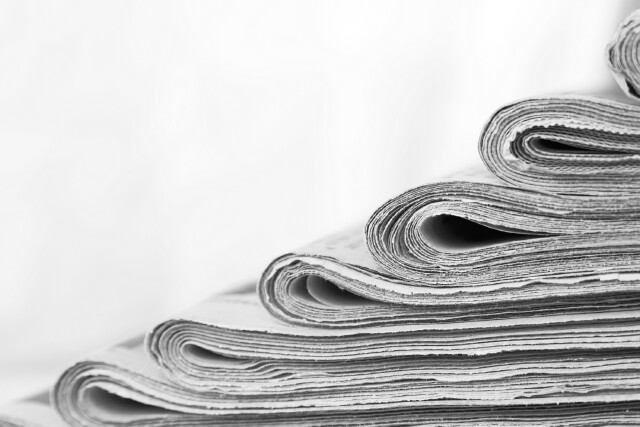 From the first days of colonial America, news and opinions circulated in occasional broadsides and handbills. The first regularly produced newspaper -- Public Occurrences, Both Forreign and Domestick -- published its first issue on September 25, 1690. The governor of the Massachusetts Bay Colony disliked the opinions in it, so he shut it down.

Nearly 15 years later -- on April 17, 1704 -- Boston's postmaster John Campbell began publishing The Boston News-Letter, a weekly widely considered to be the first continuously published newspaper in what would become the United States. And two weeks later, on May 1, 1704 -- 318 years ago this month -- the News-Letter published the American colonies' first newspaper advertisements.

In that premiere issue, Campbell had solicited for advertisers. "All persons who have any Houses, Lands, Tenements, Farms, Ships, Vessels, Goods, Wares or Merchadizes, &c. to be Sold or Lett; or Servants Run away; or Goods Stoll or Lost," he wrote in a short notice, with the erratic spelling and aggressive capitalization common to the era, "may have the same inserted at a Reasonable Rate." And in the May 1 issue, three advertisers paid those reasonable rates: one seeking the recovery of stolen goods, one looking for lost anvils and one offering to sell or rent a farm in Oyster Bay, Long Island.

But it was none other than Benjamin Franklin who made advertising in America a bit more interesting. In 1729, the former Bostonian began publishing The Pennsylvania Gazette in his adopted hometown, Philadelphia. Franklin -- who famously discovered electricity, invented bifocals and helped found the United States -- was also the first person to add illustrations to ads, simple woodcuts that depicted the items being sold. He also introduced more descriptive text to his ads, becoming arguably the first copywriter.

Newspaper advertising in early America didn't merely benefit the advertiser; it also drove the spread of newspapers. Before advertising became prevalent newspapers were expensive, but once advertisers began contributing to the bottom line, cover prices could drop to a point at which more people could afford them. Between that and advances in producing paper, it is estimated that the number of newspapers in the country grew from around 35 in 1775 to 532 by 1820. (The pioneering News-Letter, however, would publish its last issue in February 1776.)

Advertising also helped to professionalize newspapers. Before mass advertising, newspapers were typically organs of a political party, filled with opinion essays supporting a particular point of view. Once advertisers were footing the bill -- and with an overabundance of ads needing articles to run alongside -- papers moved from weeklies to daily, hired professional reporters and became more recognizable as the news sources we know today.

By the 1830s, the "penny press" had arrived, when The New York Sun lowered its price to just one cent. Supported by advertising, newspapers were truly a mass medium. In the 1840s, the advent of the telegraph allowed papers to begin quickly reporting news from far afield. And by the Civil War, in the 1860s, newspapers had become a critical tool for Americans to learn about the progress of the war and, importantly, read lists of those wounded and killed.

Newspaper ads played another key part in history. During and after the Civil War, a new role developed: men who would physically carry ads from shops and businesses and bring them to newspaper offices for publication. Those men were called agents. Their businesses became known as advertising agencies. In 1861, there were 20 of them in New York. And in 1864, a man named William James Carlton founded his own shop. Four years later, Carlton hired a bookkeeper named J. Walter Thompson. Roughly a decade later, Thompson bought the firm and renamed it for himself. Until 2018, when it was merged into Wunderman Thompson, JWT was the oldest continuously operating ad agency in the world.