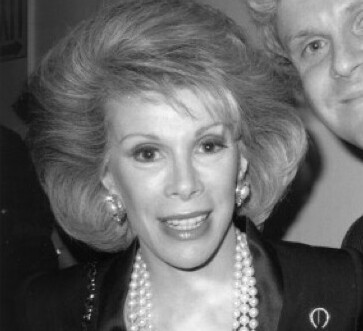 In the spring of 1986 television network executives in New York and Los Angeles were aflutter.  Johnny Carson, the king of late night, was nearing his 25th anniversary, and there were rumors he would retire.  Carson dominated late night and made a mint for NBC.  All of a sudden, everyone was in the market for a star to replace him.

NBC executives, worried about finding a worthy successor to host The Tonight Show, made a list of 10 possible replacements.  It leaked to the press.  What was most notable was the name not on it.  Joan Rivers, the woman who had been Carson’s permanent guest host since 1983, had not made the cut.

Rivers was used to controversy.  She was the queen of the well-timed celebrity insult.  Her acerbic, sometimes vulgar style had won her as many detractors as fans.  But Rivers was used to being the odd man out in late night comedy.  After all, she was -- for years at a time -- the sole female on the circuit.

Still, being left off the list was one slight too many.  She was now sure that NBC would never give her the replacement spot she felt she had earned, so she took an offer from Fox to become the first woman late night host.  Her show premiered on October 9, 1986.  But, what would be a boundary-breaking step for women became a tragedy for Rivers.

For starters, the decision to take the Fox offer completely alienated her from her mentor and friend, Carson.  He had been pivotal in championing Rivers for two decades.  Up until 1965, Rivers’ career had mostly consisted of being a member of an off-Broadway comedy troupe and of writing bits for Candid Camera.  That year, after three auditions, Carson gave her a shot on The Tonight Show.  She was a hit, and her frequent appearances thereafter led to bookings on other television shows like Hollywood Squares and Saturday Night Live.

In 1983, Rivers got the biggest honor of all:  She became Carson’s permanent guest host and filled in whenever he went on vacation.  She knew Carson loved her, but Rivers was less sure about the NBC brass.  As she later wrote in People magazine, they constantly snubbed her at social occasions; in 1985, NBC only gave her a one-year contract.  When that list came out, she was sure she was going to be replaced and agreed to talk with Fox.

Fox announced the position before she could explain herself to Carson.  She was afraid if she let him know beforehand, NBC execs would try to scuttle the deal.  She called him a moment after it became public.  But it was too late.  He was furious.  He wouldn’t take her call.  And he never forgot the betrayal.  She would never again appear on The Tonight Show for the rest of his tenure.

Meanwhile, The Late Show Starring Joan Rivers did not fare well.  Fox could not rally its affiliates around the show.  Many who did not like Rivers’ bawdy humor refused to carry it outright.  As the show sank in the ratings, relations deteriorated.  Fox executives threatened to fire Edgar Rosenberg, the show’s executive producer and also Rivers’ husband.  She stood up to them, and they both lost their jobs in May 1987.  The set of the last show was vandalized with toilet paper and shaving cream.  Three months later, Rosenberg committed suicide.  Rivers blamed it on the humiliation of being fired.

Rivers slowly picked herself up from the disaster and remade her career many more times.  She had a daytime talk show for five seasons that garnered her an Emmy.  Later, she would become a staple of red carpet interviews at award ceremonies for the E! Entertainment network.

Carson never spoke to Rivers again.  He retired in 1992 and passed away in 2005.  Jay Leno, Carson’s successor on The Tonight Show, upheld Carson’s ban of Rivers.  Conan O’Brien, who briefly hosted the show after Leno, did the same.  In 2014, when Jimmy Fallon took over as host, he welcomed Rivers back.  “It’s great to be home,” she told him.