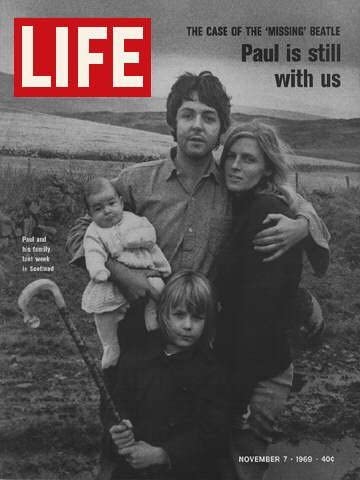 Paul McCartney is still alive. Today, this fact is unsurprising. The onetime Beatle is 79 years old, hale, hearty and seemingly busy as ever. Just a few weeks ago, he jammed onstage at the 2021 Rock & Roll Hall of Fame induction ceremony. But 52 years ago this month -- on November 7, 1969 -- McCartney's continued existence was worldwide news when Life magazine scored an interview with the singer at his Scottish farm and ran a report confirming that he was alive. The proof was irrefutable: a black-and-white cover photo of him with his wife, Linda, and their daughters Heather and Mary, the latter cradled in his arm.

"It's all bloody stupid," McCartney told the publication, not unreasonably.

For the previous month or so, McCartney's ongoing existence had been less certain. It was the bout of hysteria, primarily driven by American college students and seemingly centered at midwestern campuses, that has since been known as the "Paul Is Dead" hoax.

It seems to have all started in mid-September 1969 at Drake University in Des Moines, Iowa, where the school newspaper, the Times-Delphic, published a front-page exposé with the provocative headline, "Is Beatle Paul McCartney Dead?" In it, student reporter Tim Harper catalogued the rumors and alleged hints about Paul's demise that were then circulating and would soon become canon.

The story went big on October 12, when someone -- according to some reports, a student at Eastern Michigan University -- called into Detroit's WKNR and told DJ Russ Gibb to play the "number nine, number nine" intro to "Revolution 9" (a John Lennon composition from the White Album, which had been released a year earlier), backward. What did Gibb and his listeners hear? "Turn me on, dead man" -- just as the Times-Delphic had reported.

And according to the rumors that began to circulate, this was just the tip of the iceberg. The conspiracy, as catalogued a few days later in The Harvard Crimson (and summarizing reporting from The Michigan Daily) went something like this: On a rainy night in 1966, McCartney had driven off from the Abbey Road studios and was killed in a car wreck. Determined to keep the Beatles going, his bandmates hired someone to play him. Lennon, George Harrison and Ringo Starr felt guilty about the ruse, so they planted hints in the songs and albums released since then. "Turn me on, dead man" was just one of them.

Several more clues appeared on the cover of Abbey Road, which was released just as the rumor was gaining steam. The Fab Four, photographed crossing the street, were in fact a funeral procession, or so the story went. Lennon, at the front and wearing all white, was the preacher; Starr, in black, was the undertaker; McCartney, out of step with the others, was the corpse, and Harrison, wearing blue jeans like a laborer, was the gravedigger. McCartney carried a cigarette in his right hand, but everyone knew he was a lefty, so it was a sure sign that it wasn't really him. And the VW Bug's license plate included 28IF because if he were alive, he would have been 28 years old.

More clues abounded. On the cover of Sgt. Pepper's Lonely Hearts Club Band, McCartney's patch says OPD (officially pronounced dead). At the end of "Strawberry Fields Forever," Lennon says, "I buried Paul." The word "Walrus" gets a lot of play. According to the rumor, it is Greek for corpse. (It is not.) And then there's Lennon's song, "I Am the Walrus." Even Lennon's lyrics to "Glass Onion": "Here's another clue for you all: The Walrus was Paul." The supposed cause of McCartney's deadly crash may or may not have been a lovely hitchhiker named Rita (as in the song "Lovely Rita"); he blew his mind out in a car, so to speak (as in the "Day in the Life" lyrics); and, with the news of his death successfully suppressed on a Tuesday night, the "Wednesday papers didn't come" (lyrics from "Lady Madonna").

None of this was true. McCartney was 27. The OPD badge was from the Ontario Police Department. Lennon says "cranberry sauce" at the end of "Strawberry Fields." "Walrus" is not Greek for corpse. And so on. The Beatles' management loudly denied the claims, but people continued to believe them. After all, no one had seen McCartney. If he was alive, why didn't he come out in front of the public and say so?

McCartney and his family were in seclusion in Scotland after Mary's birth. Life, which was one of the world's dominant publications at the time, sent its London correspondent and a photographer to find them. Showing up unannounced, they caught him off guard. After throwing a bucket of water on them, he agreed to an interview to put an end to the silliness. And he confessed to being tired of all the media attention.

"Perhaps the rumor started because I haven't been much in the press lately," he said. "I have done enough press for a lifetime, and I don't have anything to say these days. I am happy to be with my family and I will work when I work. I was switched on for ten years and I never switched off. Now I am switching off whenever I can. I would rather be a little less famous these days."

McCartney also said something else, five months before the band would announce their breakup. "The Beatle thing is over," he said. "It has been exploded, partly by what we have done, and partly by other people."

No one much noticed that part. Even then, fake news had a way of crowding out the real news.