HISTORY's Moments in Media: 38 Years of USA Today: What's Next for History's Most Successful National Newspaper? 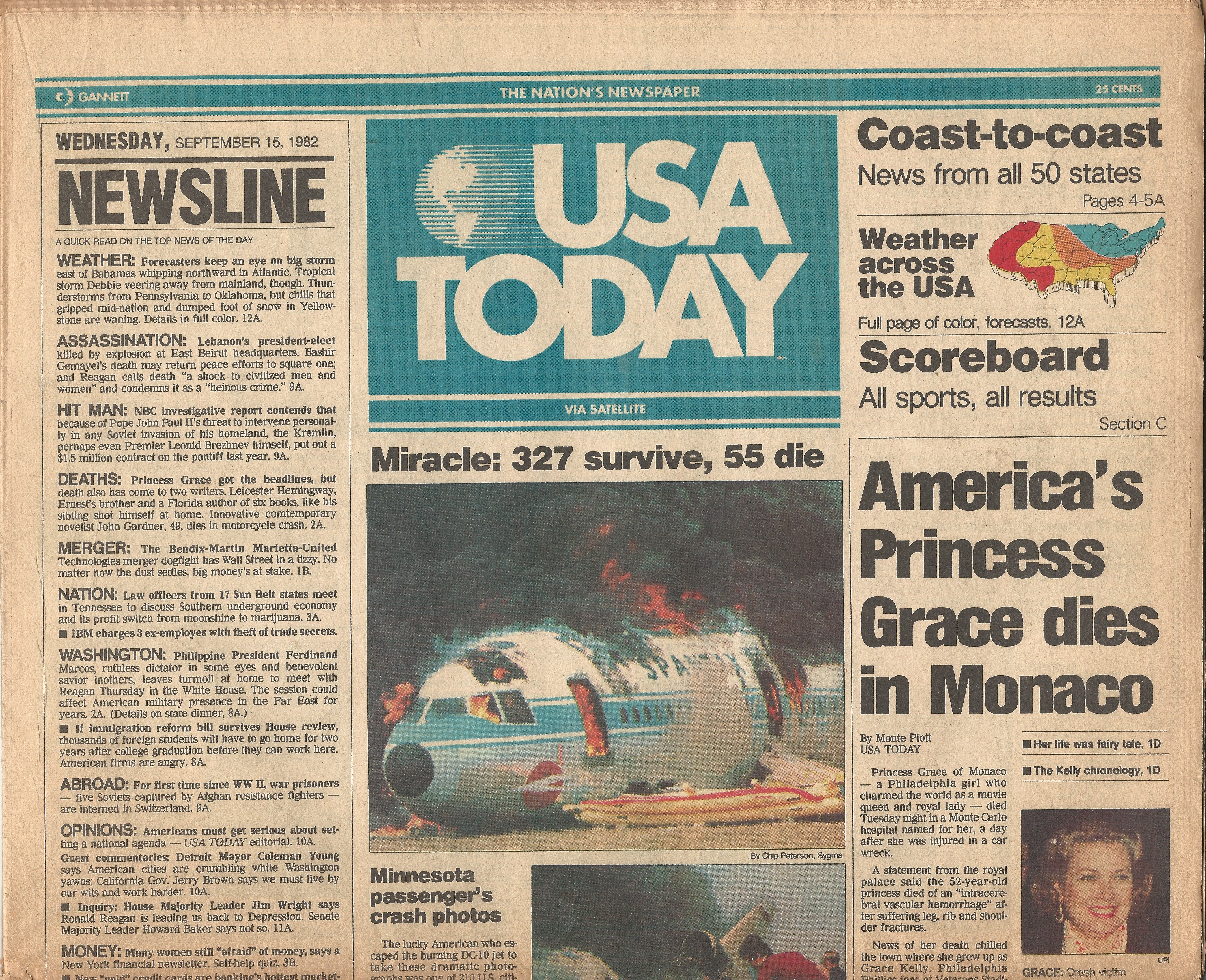 On September 15, 1982 — 38 years ago this month — the premiere issue of USA Today landed on newsstands in and around Washington, D.C. Some 150,000 copies of that first edition were printed and distributed, over the next months it rolled out to other major cities around the country. Two months later, circulation was over 360,000, and on April 24, 1983, seven months after launch, it broke 1 million.

It was the first and arguably only time a brand-new, national newspaper was launched and successfully established.

All the country's other major newspapers grew to national players from local roots. And back in the first Ronald Reagan administration, they weren't widely distributed beyond their hometown.

The New York Times, founded in 1851, experimented with out-of-town editions as early as the 1960s, but it didn't begin true national distribution until the late 1990s. The Washington Post, founded 1877, despite its influence was available only in its home market until the internet era. The Los Angeles Times, founded 1881, whose ambitions ebbs and flowed through leadership changes, never had circulation beyond California other than an occasional National Edition printed for Washington, D.C. The one exception is The Wall Street Journal, founded 1883, which launched a Pacific Edition in 1929 and become a fully national newspaper by the 1950s, but focused only on business news.

USA Today was dreamed up by Al Neuharth, the famously hard-changing chairman of Gannett, a successful publisher of small-city newspapers. He saw a market for a one-size-fits-all, easy-to-digest, general-interest newspaper targeting the managerial class of an increasingly mobile country. He also realized that then-new technology would allow him to achieve that goal. He used satellite transmission, then a novel concept, to send pages of the newspaper to a network of printing plants across the country each night, so that the morning edition could make it to doorsteps (often of hotels) and news boxes (often in airports) around the country each day.

A money-loser in its early years, by its 25th birthday, in 2007, USA Today boasted a circulation of 2.3 million. By then, it was solidly profitable.

Almost as important, it set the template for what newspaper increasingly came to look like. USA Today pioneered short, grabby articles, data-rich infographics, pop-culture coverage, and color photography. It was early on dismissed as the "McPaper," but its innovations are now the norm. At the same time its format and tone have remained carefully accessible, over the years its journalist ambitions have grown bigger. In 2018, it won a Pulitzer Prize, and on five other occasions its work has been a finalist for journalism's highest honor.

Still, the decline of the newspaper industry has been as tough on Neuharth's creation as on most of its rivals. (And also, on Newseum, a Washington museum that Neuharth created to celebrate the news industry and freedom of the press. It shuttered and sold its prominent building on Pennsylvania Avenue last year, and it says it will eventually find a new home.)

Last summer, a rival newspaper chain backed by investors and known for aggressive cost-cutting agreed to buy Gannett, keeping the acquired publisher's name. The newly combined company publishes 260 daily newspapers and more than 300 weeklies in the United States, and at the time of the sale the companies expected $300 million in savings. After the sale was announced but before it closed, rumors began to circulate that USA Today would soon be shut down as a print publication. That hasn't happened yet, but circulation, once over 2 million, was then down to 520,000.