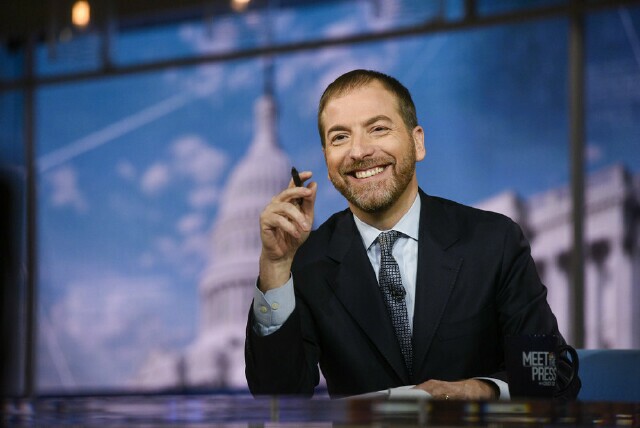 If it’s a political season, it’s Meet the Press.

The pioneering Sunday morning political talk show debuted on the NBC television network on November 6, 1947 -- 73 years ago this month, decades before Tim Russert coined the “If it’s Sunday” slogan, and a seeming eternity before viewers could find a range of commentators and journalists dissecting the latest political news on any number of television networks at virtually any time of day or night.

Its co-creators were Martha Rountree, the show’s first moderator, and Lawrence Spivak, a longtime panelist who in 1966 took over as moderator.

Meet the Press originated as a radio program, first broadcast in 1945 on the Mutual Broadcasting System. It was originally designed as a way to promote The American Mercury, a money-losing magazine founded by H.L. Mencken and then owned by Spivak. It moved to TV two years later -- before there were even 1 million sets in use across the country, according to one report -- and in 1954 became the first news program to broadcast in color.

When Meet the Press debuted, the idea of politicians and public figures answering unscripted questions from a panel of journalists was entirely new. And politicians were expected, way back then, to give honest answers.

“I think it is important that the public should hear its elected officers speak out and take their stand in answer to direct questions without preparation or oratory,” Roundtree once said. “There is nothing so refreshing as unadorned conversation.”

In the middle of the 20th century, topical newsmakers regularly appeared on Meet the Press. In 1949, a U.S. general disclosed that the Soviet Union had likely built an atomic bomb. In 1950, Republican Thomas Dewey, famous for losing to Harry Truman in the previous presidential election -- no matter what the Chicago Tribunewrote -- said he wouldn’t run again and first suggested Gen. Dwight Eisenhower as his party’s nominee. All three Kennedy brothers appeared on Meet the Press, as did Martin Luther King Jr. and countless Cold War-era foreign leaders.

The success of Meet the Press prompted imitation. CBS introduced Face the Nation in 1954, and in 1960 ABC countered with Issues and Answers. (The ABC show ran only until 1981. It was replaced by This Week with David Brinkley, which lives on, several host changes later, as simply This Week, featuring George Stephanopoulos.)

By 1990, those rivals were outshining Meet the Press, then hosted by the NBC stalwart Garrick Utley. “MTPis no longer at the top of the talk-show ratings race,” the Washington Posthad written in 1987, “and many observers feel its rivals have overtaken it.” Viewership in 1990 was estimated at 2.6 million, compared to 10 million in 1967.

Then, in 1991, Tim Russert took over as moderator. Russert, who was also NBC’s Washington bureau chief, created the modern model of Meet the Press -- and not just because of that memorable slogan.

On Russert’s watch, one-on-one interviews, usually with Russert playing his subject’s words back to him, largely replaced the traditional panel format. The show expanded from 30 minutes to an hour. At Russert’s sudden death in 2008, Meet the Press had been the top-rated Sunday political talk show for 353 of the previous 354 weeks.

Under current moderator Chuck Todd, the reach of Meet the Press has continued to grow. Today there’s a five-days-a-week broadcast on MSNBC, as well as newsletters, podcasts, blogs and even a film festival. Last season was its fourth as the top-rated Sunday talk show.

All these years later, Meet the Press continues to set the agenda. Every president since Kennedy has appeared on the show, in some cases before or after his presidency. Donald Trump was on in February 2016, as a presidential candidate, and then again in June 2019, from the White House. Joe Biden -- who was not quite five years old when the show debuted -- was on in March of this year.