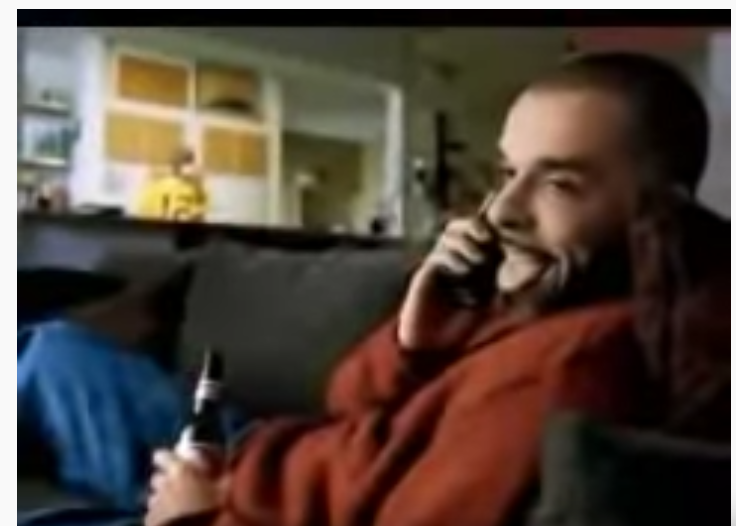 Twenty-one years ago, it was new. It was introduced to the world on December 20, 1999, when Budweiser aired the first ad in its iconic "True" campaign during a Monday Night Football game between the Minnesota Vikings and the Green Bay Packers. And it became a national sensation after Bud aired another "True" spot during Super Bowl XXXIV, on January 30, 2000.

The line started with a long-running joke among four lifelong friends in Philadelphia. One of them was Charles Stone III, a music video director, who made a short film called True as a way of showing off his talents and trying to break into feature films. It was a depiction of everyday life for these guys -- and, more or less, just like the eventual ad. Stone and his three buddies are sitting around, answering the phone, whassup'ing each other and giving each other the same response: "Nothin', watchin' the game." The standard reply: "True, true."

In late 1999, an associate creative director named Vinny Warren at Bud's agency, DDB Chicago, got his hands on a copy of the short, which was making the indie-film rounds. DDB's U.S. chief creative officer at the time, Bob Scarpelli, worked out of the Chicago office. He'd go on to become the agency's worldwide CCO, and then its worldwide chairman. Scarpelli believed in advertising with "talk value," a term he trademarked, which basically meant that he wanted to achieve what everyone in advertising wants to achieve: creating work that strikes a powerful chord and becomes something everyone talks about, jokes about and riffs on. When Warren saw Stone's short film, he knew he saw the sort of guys-watching-sports camaraderie that's at the heart of the Bud brand. He was also pretty sure he saw talk value.

To turn the film into an ad, DDB made only the smallest of changes. The "watchin' the game" response became "watchin' the game, havin' a Bud." There was discussion of changing the "true, true" response, then seen as somewhat inscrutable slang, into something more commonplace, like "right on." But it stayed, and in fact inspired the tagline of the entire campaign. DDB also looked into casting actors, but, after auditioning dozens, the agency and client agreed to Stone's suggestion to retain him and his friends. (One from the short didn't want to be in the ad, and an actor was cast.) Stone directed and went on to direct the rest of the campaign.

The first ad, broadcast during Monday Night Football, was a 60-second spot that was essentially a reshoot of Stone's laconic, guys-hanging-out film. For the Super Bowl, there was a 30-second entrant, one seen as slightly more accessible to a broad audience, with the tongue-wagging set against a traditional beer-ad plot of a guy trying to hide from his buddies the "girlie" things he does with his girlfriend. And as the winter progressed, Bud rolled out more Whassup ads.

They had talk value to spare. Radio DJs riffed on the slogan. Late-night hosts made jokes. The campaign may have hit at the perfect moment for a tagline to break through so widely: Before widespread DVR use, when people still watched nearly all TV (and commercial breaks) live, but with sufficiently widespread internet penetration that people started making and sharing Whassup memes. BBD estimated the campaign earned $20 million in free publicity. (This being 2000, that estimate counts only TV and print; they didn't have a way of tracking digital value.)

When Bud did early testing of the ads, there'd been concerns that an older audience just didn't get it. The guys in the ads thought some of that was racism, that older, whiter, wealthier distributors didn't like to see the King of Beers represented by men of color. As the campaign progressed, BBD got in on its own joke and expanded the Whassup phenomenon to include other protagonists. At the height of Sopranos mania, a bunch of Jersey types asked, "How you doin'?" A group of besweatered Yuppies inquired, "What are you doing?" The guys in the ads reported that a distributor who'd initially been dismissive later apologized, saying that his kids were into the tagline, and his grandkids -- and his wife. (They also reported getting loudly Whassup'ed across the lobby of 30 Rockefeller Plaza by none other than Mrs. Brady herself, Florence Henderson.)

The "True" campaign petered out after a year, or what Bud execs saw as a natural life cycle, and also once 9/11 prompted a shift from jokey ads to patriotic ones. But it still lives on, in jokes and references and occasional reunions, whether for Barack Obama in 2008 or the lockdown edition released in April of this year, featuring sheltering-at-home former NBA stars Chris Bosh and Dwyane Wade, WNBA star Candace Parker and DJ D-Nice.

Unsurprisingly, the original campaign won just about every major advertising award, including a Grand Prix at Cannes. But perhaps most important to Anheuser-Busch, it also boosted Budweiser's sales.