HISTORY's Moment in Media: How Coke Launched the World’s Most Famous Jingle 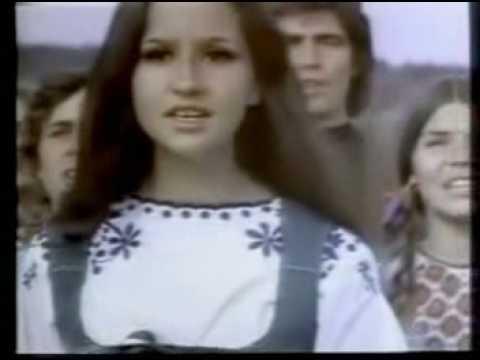 The world’s most famous commercial jingle traces its origin to a dense fog that covered Britain in 1971.  That winter fog was so thick that the plane carrying Bill Backer, an ad man working with the soft drink giant Coca-Cola, was diverted to Shannon, Ireland.  At the crowded airport café, he gathered with passengers from planes from all over the world that had been similarly stranded.  But instead of being irate at their fate, he noted that people were grabbing refreshments and chatting and telling stories.

He had a flash of insight and immediately began to scribble out what would become iconic lyrics: “I’d like to buy the world a Coke and keep it company.”

Backer -- who, poetically, had started in the mailroom of McCann Erickson and rose by that time to Creative Director -- met up with other members of the team, including music producer Billy Davis.  They embedded the Coke thought into the more universal feel good sentiments the ad is famous for, and the lyrics became: “I'd like to buy the world a home/ And furnish it with love/ Grow apple trees and honey bees/ And snow white turtle doves./ (Chorus): I'd like to teach the world to sing/ In perfect harmony/ I’d like to buy the world a Coke/ And keep it company. / That’s the Real Thing”

After adding a catchy tune, the jingle was recorded by The New Seekers, a popular British singing group of the era. It was then shipped to radio stations across the United States, airing for the first time on February 12, 1971 (that’s 47 years ago today). Several Coke bottlers complained that it was too subtle, but the public loved it. People began calling into radio stations and requesting the jingle as if it were a popular song. Indeed, the song became so popular that Coke decided to turn it into a television commercial, eventually going so far as to greenlight a $250,000 budget, a staggering sum at the time. (Watch the video above.)

The commercial, filmed on a flower-laden hillside outside of Rome, featured fresh-faced youths who had been culled from local embassies and universities for their ability to visually represent every corner of the world. The dewy-faced woman in the opening shot was a British nanny whom producers had cast when they saw her walking the streets of Rome. They were all then taught to lip-sync the song. The commercial started to air in July of 1971 and immediately resonated deeply and positively with viewers. Coke received more than 100,000 letters praising the ad.

After that, the jingle was so successful that Davis wanted to record it separately as a pop hit. At first The New Seekers declined due to scheduling conflicts, so Davis created a new group from studio singers called The Hillside Singers, who recorded the modified version from radio. When that became a hit, The New Seekers suddenly had a change of heart and recorded their own version. Both versions of the songs would make Billboard’s Hot 100 chart. The New Seekers’ recording peaked at No. 7 on Jan. 15, 1972; that same week; The Hillside Singers' version peaked at No. 13. The song went on to be recorded in a wide range of languages as well and, according to Coca-Cola, it “sold more sheet music than any song in the 10 years before 1971.”

"I'd Like to Buy the World a Coke" has shown great staying power in American culture over the decades. It is still often sung by glee clubs and featured in Top 10 lists of ads. In a more recent homage, it was featured in the final episode of Mad Men. In the last sequence of the show, its brilliant and flawed hero, Don Draper, an advertising man through and through, is at a retreat on a bluff in California meditating. While others are inspired by the peace, he is inspired to dream up an iconic Coke ad on a hill.

Backer went on to found Backer & Spielvogel, which ultimately became the then third-largest advertising agency in the world, Backer Spielvogel Bates Worldwide.