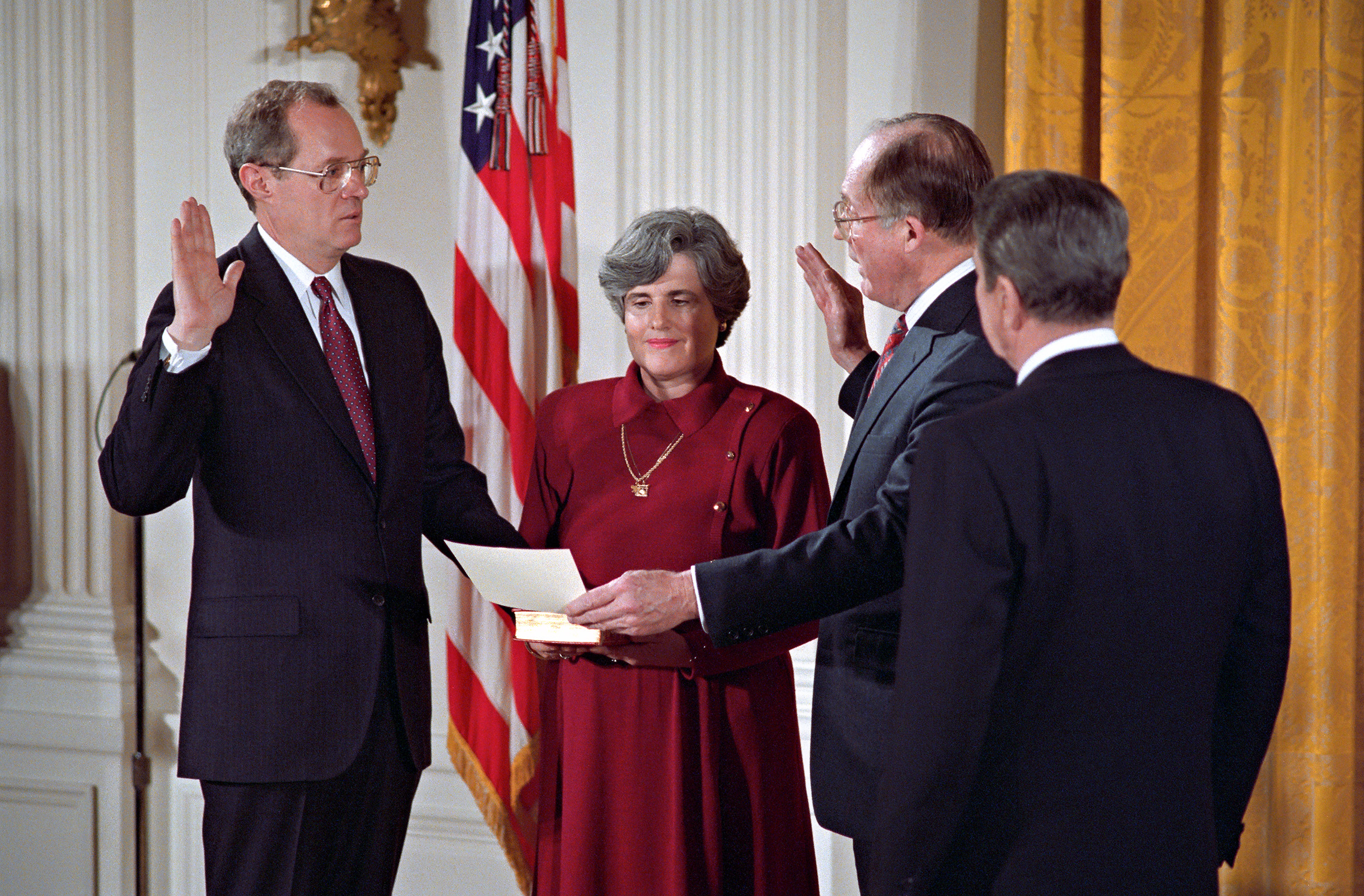 A look back at Justice Anthony M. Kennedy's 30 years on the U.S. Supreme Court is helpful in predicting any number of paths the court may set following his retirement at the end of July.  Analysis about the direction that the new court could take regarding abortion, immigration and LGBT laws currently top SCOTUS news.  But this is also a good time to ponder the impact of Justice Kennedy's decisions related to media and telecommunications as well as the outlook for our industries as the court reconfigures.

Current articles about changes on the court emphasize Justice Kennedy's pivotal role in joining and sometimes leading liberal decisions despite being the nominee of a Republican president and mostly voting with the court's conservatives.  But Kennedy dislikes the term "swing judge" as noted by The New York Times, which says that despite sometimes appearing eccentric his jurisprudence is based on "fixed and strong" views.  Other commentators note that his decisions, overall, reflect a civil libertarian interest in minimizing governmental intrusion in individual freedoms deeply rooted in the U.S. Constitution.

This emphasis on constitutionally mandated freedoms began early in Kennedy's career.  In 1965, after three years in private practice, he became a professor of constitutional law at University of the Pacific's McGeorge School of Law.

By 2002, after 14 years on the U.S. Supreme Court, Ashcroft v. Free Speech Coalition demonstrated Kennedy's belief in a strict interpretation of freedom of speech even in a case centered on publication of child pornography -- a use of digital media that he found repugnant.  Authoring the opinion for a mixed group of conservative and liberal justices, Kennedy described the Child Pornography Prevention Act of 1996 as being "overbroad and unconstitutional" in its limitations on free speech.

The digital age was still science-fiction fantasy when Kennedy was admitted to the California Bar in 1962.  Telecommunications law was in its infancy.  It was a time when television was relatively young and lightly regulated, yet careful to screen straight-laced content.  However, by 1970 the Federal Trade Commission decided that TV's Big Three networks (ABC, CBS, NBC) were breaking the public interest rule of the Communication Act of 1934 by exerting so much control over type, timing and providers of broadcast content.  There was a scarcity of room in the airwaves for diversity.  So, the FCC established the Financial Interest and Syndication Rules (Fin-Syn), which limited network power and financial gain.

Fin-Syn spurred the growth and syndication opportunities of alternative networks transmitted via cable and dish technologies.  It also encouraged the spread of tools such as VCRs and DVDs which made home viewing more flexible.  Except for content broadcast by the Big Three, television became a pay-per-view environment while the traditional networks struggled to compete for content and viewers.  This not only threatened survival of the Big Three but also access to content for viewers who couldn't afford cable and dish subscriptions, extra fees for content on those media, and new home recording tech.

As this problem arose and the balance of power between the traditional and cable networks shifted, Congress passed the Cable Television Consumer Protection Act of 1992.  It forced cable companies to set aside some of their channels for local programming.  This is the "must-carry" rule of broadcast media law.

A year later, the FCC repealed Fin-Syn with public interest in mind.  However, what goes around comes around and, of course, may reach the Supreme Court.  When broadband debuted as a speedy internet transmission technology in the 2000s our current telecommunication giants were born -- the internet service providers, some of which arose from cable companies and others through what were formerly telephone companies.  In some parts of the country there are so few ISPs that the ones serving those areas are virtually monopolies.  The irony of Fin-Syn's death is that public interest complaints concerning access to and quality of the media have expanded.

As Justice Kennedy departs the court, the media and telecommunications industries face digital battles reminiscent of the Fin-Syn era.  In particular, uncertainty abounds concerning consequences of the FCC's June 11 repeal of net neutrality -- policies initiated in 2005 and formalized in 2015 to retain open access to the internet and digital innovation.  Although internet service providers may benefit from deregulation, they also may struggle if confronted by a growing patchwork of state legislation setting net neutrality rules.

Net neutrality, the ability to innovate in digital industries, and monopolistic ISPs are key challenges facing the media and telecommunication industries.  Although the neutrality issue isn't yet on the court's doorstep, anti-trust issues and questions about digital innovation, freedom of speech and privacy have arrived.

Here are some examples of decisions that Justice Kennedy helped shape:

Verizon Communications, Inc. v. Law Offices of Curtis V. Trinco, LLP (2004)
This "must-carry" case was based on the Sherman Anti-Trust Act of 1890 and the 1996 Telecommunications Act, which aimed at increasing competition among telephone companies.  Verizon dominated telephone communication in New York State and provided AT&T with access to its system.  AT&T customer Curtis Trinco asserted that Verizon provided inferior service for AT&T customers.  The court unanimously found in favor of Verizon, stating that Trinco failed to prove anti-trust activity under the Sherman standard.

Takeaway:  Relative to an anti-trust action, the Sherman Act is more of an armored tank than the Telecommunications Act.

Ohio v. American Express Co. (2018)
In 2010, the federal government and 17 states brought an anti-trust suit against three credit card companies -- VISA, Mastercard and American Express -- regarding practices that stifled competition by steering business away from merchants based on what cards they accepted.  VISA and Mastercard dropped out of the suit by rescinding their steering activity.  But American Express persisted and eventually arrived at the Supreme Court.  A conservative block of justices, including Kennedy, decided in Amex's favor at the end of June.

Vox Media says this decision weakens the Sherman Act and may have negative consequences far beyond the credit industry.  Vox says it's possible that the Amex decision will become a precedent harming customers, employees and suppliers of large high-tech companies.

Takeaway:  This ruling may make it easier to form monopolies in the media and telecommunications industries.

Aereo, a technology innovator that invented a dime-size antenna for transmitting network television programming over the internet, went bankrupt following its loss to ABC.  Conservatives on the Supreme Court, including Justice Kennedy, decided that transmitting programs -- for which it hadn't paid -- to subscribers over the internet was breach of copyright.

Takeaway:  Technological innovation affecting communication will become a constitutional issue in many ways.  In the pending Berninger v. FCC, SCOTUS will decide whether FCC gatekeeper power over new technology for communication over the internet poses an obstruction of first amendment rights.

Cable company Turner Broadcasting attempted to overcome the "must-carry" rules of the 1992 Cable Television Consumer Protection and Competition Act by arguing loss of freedom of speech in both cases.  Justice Kennedy authored the decisions in which he joined a mix of liberal and conservative court members in ruling against Turner Broadcasting.  Both decisions sided with the government's right to protect public interest by insuring diverse sources of broadcast programming.

Takeaway:  Just a question -- Will a new swing voter emerge to conserve the must-carry rules as being important to the public interest?

As a staunch free speech advocate, it should come as no surprise that Justice Kennedy authored this decision in favor of Playboy.  Once again, the majority was comprised of liberal and conservative justices.  They decided that a section of the 1996 Communications Decency Act passed by Congress wasn't "the least restrictive means to block the transmission" of sex-related programming.

Takeaway:  The majority noted that customers can tell cable providers to block certain channels but didn't resolve the issue of signal bleed -- accidental transmission of blurry images and audio.

South Dakota v. Wayfair (2018)
E-commerce is redefining interstate commerce for purposes of taxation.  A long-established understanding of the Constitution's "Dormant Commerce Clause" has prohibited taxes of enterprises that aren't physically present in a state.  But a mostly conservative group of justices, led by Justice Kennedy, reversed former Supreme Court jurisprudence in this case allowing South Dakota to collect sales tax from internet sellers located out of state.

Takeaway:  E-commerce has made it difficult for some states to maintain sales tax revenue.  States like South Dakota that don't have income tax rely heavily on sales tax.  So, SCOTUS stepped in where Congress feared to tread.

Carpenter v. United States (2011)
Justice John G. Roberts provided the swing vote in this decision by the court's liberal block related to armed robbery.  The constitutional issue concerned whether it abridged the Fourth Amendment for a government agency to seize cell phone records based on those calls' connections to specific cell towers.  In his dissent, Justice Kennedy asserted that collection of certain types of business records is lawfully compelled and that cell-site records should be no different.

Takeaway:  As the free, multimedia judicial archive Oyez notes, "expectations of privacy" in the digital age don't line up neatly with legal precedents such as third-party information.

What's ahead for Supreme Court cases affecting the media and telecommunications when Justice Kennedy departs?  Whether the court swings further to the right as President Trump hopes may not be as predictable as some news reports state.

History shows that new justices sometimes don't behave as expected by the presidents who nominate them.  According to Politico, Republican presidents from the mid-20th century forward "picked a remarkable number of justices who turned out to be either moderate -- or just as frequently squarely in the liberal camp."

Here's something more predictable.  The SCOTUS docket of pending cases and other hot-button cases that might be appealed present at least two major communications industry issues on the horizon for legal decision -- cable must-carry rules and the growth of monopolies among ISPs.  These include AT&T, Inc. v. FCC and the recent Justice Department challenge to the District of Columbia decision affirming the right of AT&T and Time-Warner to merge.

Meanwhile, Justice Kennedy may be watching the news, but he may also may be indulging his hobbies of reading history and Shakespeare, playing golf and tennis, and swimming.  And, being a man who prizes politeness and preservation of constitutional liberties, he also may be hoping for America to become great again by regaining civility and tolerance.