Podcast: How Nat Geo Captured the World of Animals, Live 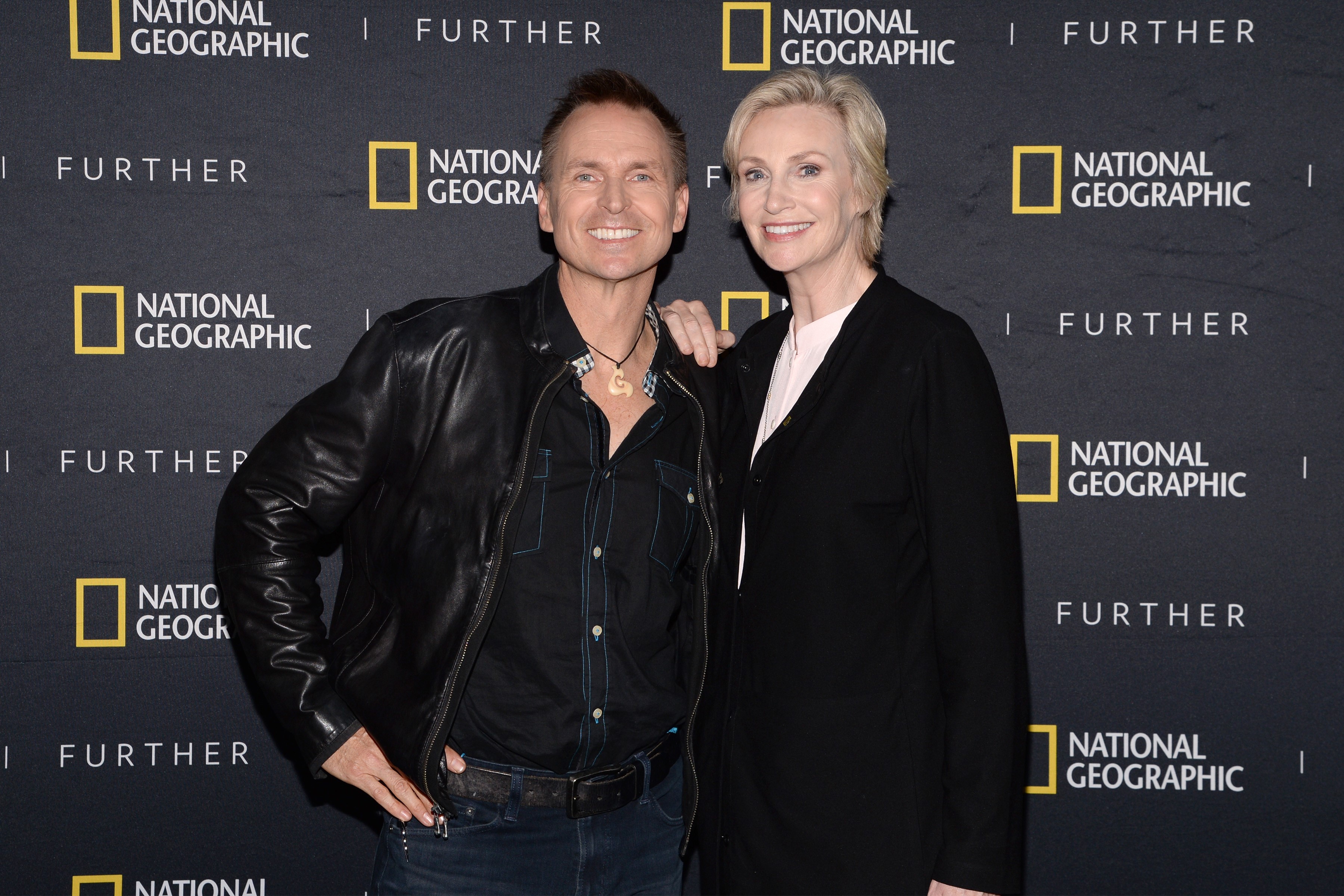 I had the opportunity to chat with the Executive Producer of Earth Live, an ambitious live two-hour telecast July 9 on National Geographic which will capture animal habitats in real time.  He shared how he went from concept to greenlight to 50 cameras set to capture some never-before-seen animal activity in a dozen countries thanks to technology that has evolved to enable that all in real time. Please listen here– and subscribe on iTunes! – to this first Insider InSites podcast from MediaVillage.com.

Please listen here– and subscribe on iTunes! – to this first Insider InSites podcast from MediaVillage.com.

E.B. Moss:  I’m here with Al Berman [pictured below with Phil Keoghan] for some Insider InSites, spontaneously on-site at the Nat Geo kickoff party for Earth Live [to be telecast live on Sunday, July 9].  Al is the Executive Producer for this and is the mastermind behind setting up 50 cameras all around the world in 12 countries.  Tell us about this!

Al Berman:  Yes, we have at least 50, and by the time we go on air will probably have more.  We’re at 14 manned locations, over 50 locations total, and we’re doing something that’s never been tried before.  We’re around the world, not in cities where you have technical infrastructure, where you have Internet, no.  We’re in the nether lands of the world where the wildlife is.  So we went after the wildlife and then figured out how to get the signal from wherever we are back to New York, where we have our studios and our hosts -- Phil Keoghan and Jane Lynch [pictured at top] -- and Chris Packham, our animal expert.  So it’s been a technical challenge, a creative challenge, and just lining up the very best photographers in the world ... that’s been a challenge, too. 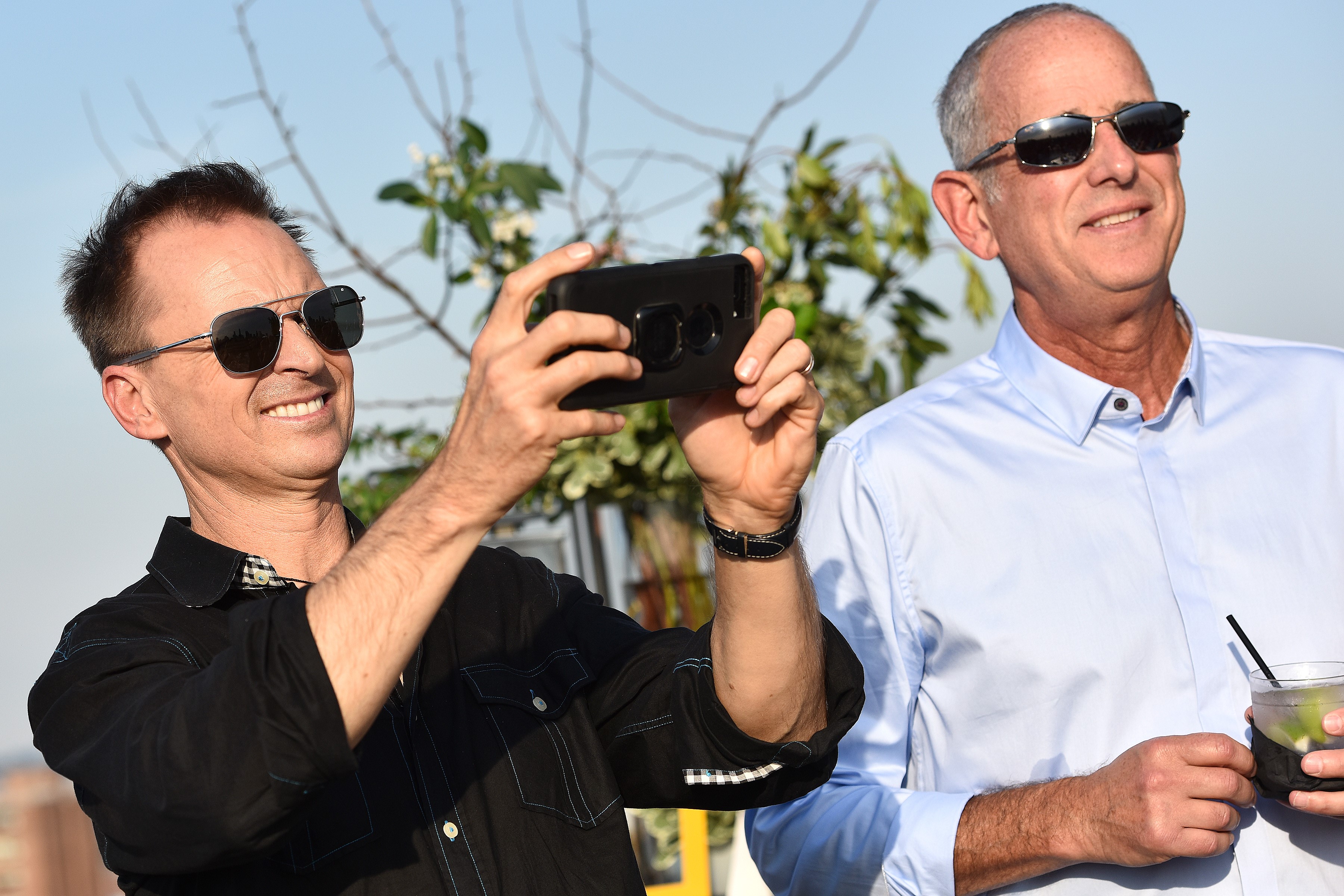 EB:  What were the origins?  How did it come about?

Al:  I originally approached Nat Geo and suggested we do two or three places live -- safari, under the water with sharks -- and Tim [Pastore, head of original programming for National Geographic Channel] had the vision.  He basically said, “How about we do the whole world?”  So, I looked at him and I said,  “Okay.  How long do you want it?  How much money do you want to spend? [etc.],” and we pounded fists and that was it and the deal was born that day, almost two years ago.

Al:  All live July 9 here, July 10 in Europe and Africa and the other 172 countries where it will be telecast.

EB:  That is a feat of coordination -- thanks to technical know-how and great people.

Al:  What we said is, “We don’t know how to put this together,” but we do know how to hire the best people to figure this out so we hired the best live director, Glenn Weiss, who’s won 13 Emmy Awards.  We hired the best technical manager, Gail DePoli, who won probably more than that, the best line producers, and we said, “Okay, here’s a challenge and let’s figure it out.  By the time July 9 rolls around we’re going to have a kick-ass show.

EB:  Do you have a sense of what you’re going to capture live from the Earth?

Al:  We know some of the things we’ll find.  For example, we’ll have a scout plane with a receive dish over Fredericks, Alaska looking for humpback whales which are always there this time of year.  A boat containing scientists with a drone will approach them and fly the drone right over the humpback’s blowhole.  When the humpback exhales, the snot will fall on the lens, the drone will come back to the boat and its DNA will be analyzed.

Al:  We know we have a Golden Eagle in Oregon that will have a tiny little camera and transmitter on its head.  We will watch it as its soaring and measure it's speed as it plunges at almost 200 MPH, and we’ll see the bird’s eye view.  That we know we have.  Now, if a storm comes in that could mess things up.  There are certain things we expect to find; others we don’t know.

Al:  Animal sex -- we’re hoping for that once each half hour over the course of the two-hour broadcast.  Other things we just don’t know.  In Maasai Mara, we will have tracked every pride in the Maasai Mara in Kenya.  We’ll be out there with three vehicles with cameras that can shoot at night so it looks like daylight.  We’ll have the very best camerawoman in the world -- Sophie Darlington -- who knows all these lions by name.  We hope and expect to get them on the hunt and maybe get a kill but we just don’t know.

EB:  I understand this will take place in all the time zones around the world and so animals will be doing different things at different times as well.

Al:  Exactly, so it’s the middle of the night in Kenya; it’s dawn at the coast of Thailand, and it’s low tide, because of the full moon.  It’s the lowest tide of the month and these Macaque monkeys are on the rocks at the edge of the shore and start smashing clams on the rocks and start eating the clams.  They don’t know people so they’re not afraid and people can walk right up and watch this behavior.  One of the reasons we’re doing this broadcast July 9 is because it’s the full moon closest to the summer equinox, so it’s the longest day with a full moon.

EB: Phil Keoghan just walked by.  We're at the kick-off event for this on Nat Geo, and Jane Lynch is another U.S.-based host.  Phil obviously is used to traveling all over the world.  What are your expectations for the hosts?  What will Jane and Phil be doing?

Al:  Phil keeps saying "give me more, give me more, I want to get up to speed on everything."  Phil has been everywhere and so he's going to take us everywhere.  Jane is fascinated by just about everything, so that fascination and that sense of humor will be an important part of the [show]. Then we have another pure animal expert who has a tremendous amount of television experience.  He's been on Jimmy Fallon and others; his name is Chris Packham, he will know the number of vertebrae in every mammal that we're seeing.

EB:  Well, everybody knows that.

Al:  They certainly will after this [show].

EB:  Al, is there an environmental angle to this?  Is there a cause overlay to the show?

Al:  Good question.  We discussed this very early on and we decided no.  This is to simply show everybody the wonder of wildlife around the globe. Whatever conservation message they may want to take from that, that's up to them, but we are not pushing any environmental cause.

EB:  Hopefully it will inspire people either way. Thank you so much Al Berman.