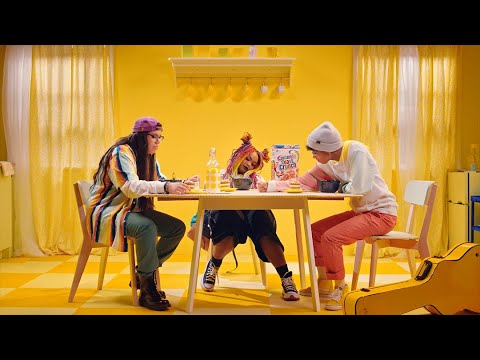 How do you promote Cinnamon Toast Crunch cereal to attract Gen-Z consumers in a fun way? That was the task at hand for Warner Music Group's UPROXX site. It did so by creating a colorful interactive video, set in the cereal's fanciful world, known as the Cinnaverse, and starring the pop-punk trio Meet Me @ The Altar.

"Interactive music videos aren’t necessarily something new, but there’s not a massive history of them being done with a brand involved," explained Kurt Campbell-Anderson, head of content studio for UPROXX, referring to the video’s mix of live action, animation and viewers’ ability to choose what direction the video will go in.

There’s a reason why that kind of creativity is not done more frequently: It can be difficult to connect a brand and a song together in a way that makes the interactivity meld together smoothly, Campbell-Anderson said. "But when we looked at Cinnamon Toast Crunch and their Cinnamoji character we saw a perfect opportunity to make that work."

In the video, the band’s new song "Wake Up" plays as the trio sits at a breakfast table munching on Cinnamon Toast Crunch. The cereal's impish animated characters, Cinnamojis, jump from the box and scamper through their lives. The band members ultimately end up in the cereal’s cartoon world of spoons and milk and cinnamon squares.

The video has already been getting some rave reviews. "Product placement never felt so fun," said Alexis Hauk in ARTS ATL.

UPROXX has been known to pair stars and products in a way that gets the attention of sometimes hard-to-reach fans. They go back to a video featuring hip hop artist and entrepreneur Rick Ross promoting his Checkers fast food franchise restaurants.

Indeed, rock bands have been used in cereal ads as far back as The Rolling Stones doing a 1964 ditty for Rice Krispies.

"Our philosophy in working with brands has always been based in amazing storytelling that connects them directly with our audience through the conversations and moments that matter to that audience," he says. "It’s not a coincidence that so many of those opportunities come to life through the lens of music. Music is at the foundation of nearly every moment that matters."

Gen-Z audiences can be notoriously difficult to attract. "[However], from research, we know that both music and gaming are huge passion points for that audience," Campbell-Anderson said. "By gamifying the music video experience and tapping into a band that is relevant to Gen-Z, we aimed to reach them in an engaging and unique way."