How We Listen to Music Is Rapidly Changing 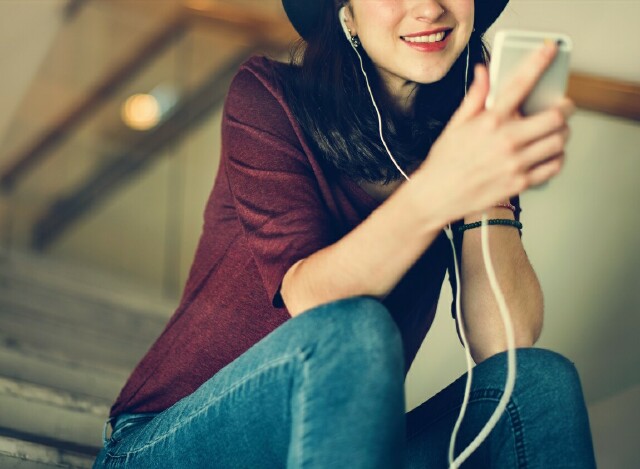 For millennia, humans have been listening to music and stories for entertainment and education. In fact, listening is so innate to the human experience, research has proven that infants can recognize voices, songs and books that they heard while in utero.

Technology has radically changed how we listen to music, news and stories. Just a century ago, the first commercial radio broadcast in the U.S. delivered the results of the Harding-Cox presidential race. The success of that broadcast would define public radio and the distribution of news for years to come.

Recorded music formats evolved swiftly in the latter half of the 20th century -- from records to 8-tracks to cassettes to CDs to MP3s. But radio didn't change as dramatically until this past decade. Satellite radio offered a massive expansion of radio stations and established a notable, but somewhat niche, audience. The real revolution in radio started with internet-streaming services like Pandora ... and exploded when these platforms moved into smartphone apps. This is disruptive innovation that offers consumers personalization, discovery and on-demand access to a huge catalog of songs that would be cost-prohibitive to own.

This is the first of a multi-part series where I'll be exploring how we listen to music these days, who listens to various audio platforms, and state of the audio-streaming landscape. Let's dive in!

Music and audio are becoming something we access, rather than something we own. This transformation is especially apparent among Americans under 50. 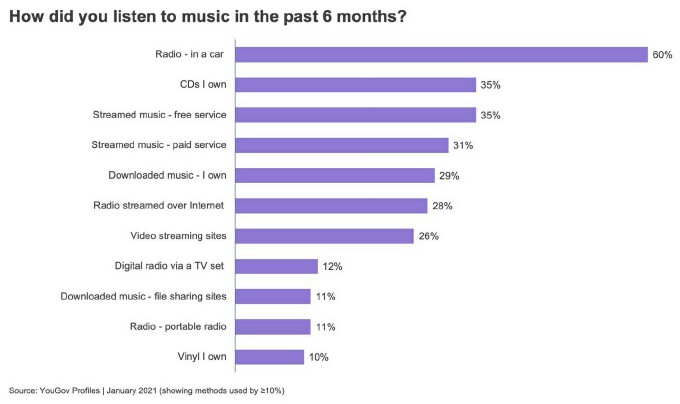 There are opportunities for marketers on both types of services, but those opportunities take different shapes (ads vs. integrations). Video streaming sites are also worth noting since video sites like YouTube are likely a part of many media plans.

We see divergent listening behaviors between adults under and over 50. While a car audio is technically the top way people of all ages listen to music, there is 22-point difference between Americans aged 18-34 (48%) and those over the age of 50 (70%). 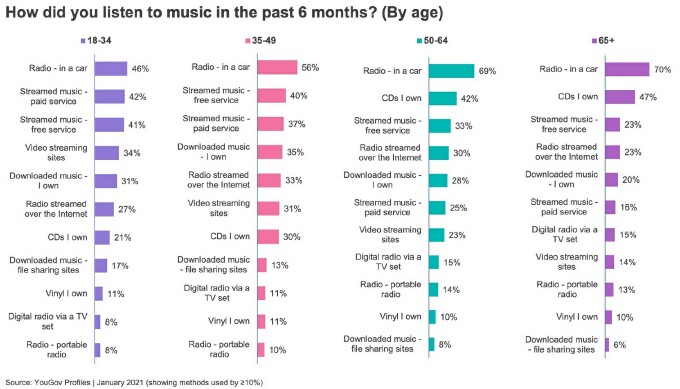 Unlike the growth we have seen in other digital media like video streaming and podcasts, listenership for streamed radio did not grow in 2020. However, streamed radio held steady during a time when listening to FM radio dropped significantly (likely due to less time spent in the car).

Is the audio streaming landscape at saturation? We see a similar pattern play out when looking at two of the top audio platforms over time. From 2013 to 2016, both Pandora and Spotify experienced growth as consumers adopted subscription music services. By 2017, rising tides are no longer lifting all boats, with continued growth for Spotify but a plateau for Pandora. The wild card of 2020, COVID-19, caused a steep but temporary decline for Spotify, while Pandora managed to stabilize declines and retain its listeners.

We'll dive deeper into the competitive landscape in the next article in this series, but the increasing number of players and plateauing of category users means growth in the audio sector will become harder for category leaders if they don't innovate.

Audio streaming happens wherever a smartphone or computer is, not just in the car like traditional radio. Both formats should be considerations for your audio plan, but they are different contextual placements and may require different messaging.

The speed of change continues to accelerate, and the past year has thrown us some real curveballs! The right data can empower marketers to more confidently navigate today and plan for tomorrow. I love to strategize and help; contact me to see this data, and more, broken out for your target audience.