By Simon Applebaum May 04, 2017 Upfronts/NewFronts Archives 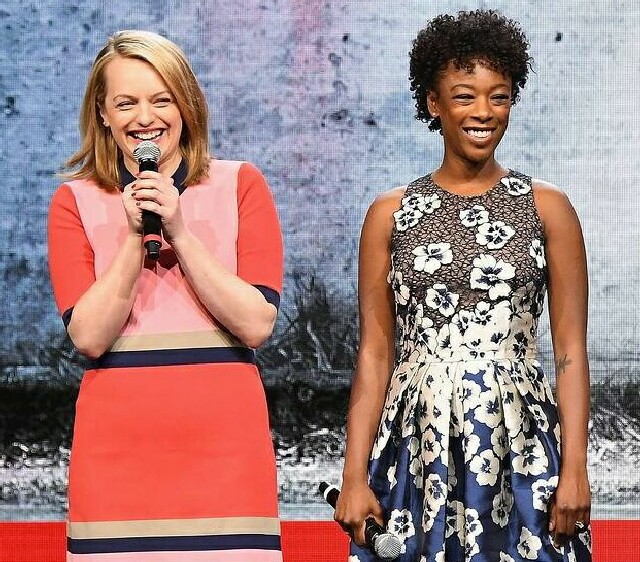 Despite holding court the first Wednesday of Digital Content NewFronts' fortnight, Hulu preferred to call its annual morning event an Upfront. Turned out to be a fitting description, because from the get-go Hulu was up front in declaring this was the start of a new era in its ten-year existence. (August 2017 will mark Hulu’s tenth anniversary!)

Venue: Madison Square Garden Theater, home to big Upfront crowds for Turner, The CW and other programmers over the years.  A trio of large green screens outside the theater posted greeting copy for individual advertisers, agencies and media buyers while attendees reached for coffee, fruit salad and other breakfast items.  One moment Progressive would be recognized, followed by GameStop or Energizer or Horizon Media seconds later.  Bottled water and organic mixed fruit drinks from BluePrint were available at stations next to the two main entrances.  (After a taste, I stocked up on a few bottles of Lemon Yay, made from lemon cayenne and agave.)  A giant green screen presented salutations to attendees inside the theater. There was even a short green stairway to the stage.  Grade: 4 Jacks

Presentation:  A three-part affair, starting with Hulu CEO Mike Hopkins announcing the launch "at this very moment" of Live TV on Hulu, the combo of Hulu's current content assortment with 50-plus broadcast and cable networks bundled in with a new interface.  "The TV of your dreams is here," Hopkins declared.  "It is simple and effortless; the interface is cinematic by nature and you get access to the TV you want in the home.  We're going to boldly go into TV's next adventure together."  That “adventure” -- as explained by Hopkins, Senior Vice President, Head of Content Craig Erwich and Ad Sales Senior Vice President Peter Naylor -- will match high-quality premium content, more of it original and exclusive to Hulu, with innovative premium advertising opportunities.  Naylor added that at all times the ad environment will be brand-safe, a condition several NewFront participating ventures are expected to guarantee before the end of next week.  Grade: 4.5 Jacks 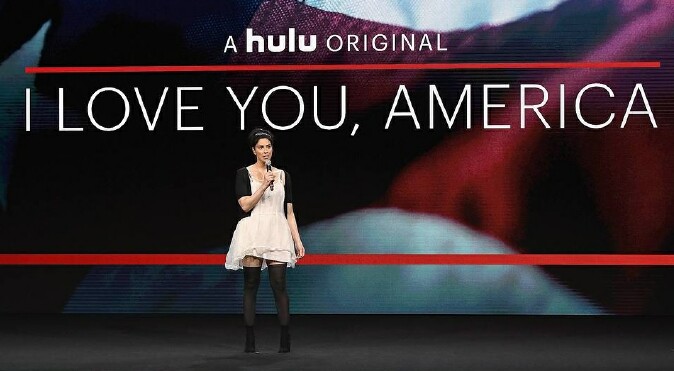 News: Live TV on Hulu will cost $39.95 per month, with the current on-demand Hulu format still available for $7.99 per month.  A parade of new original series begins this summer with I Love You, America, a weekly political comedy/variety half-hour hosted by Sarah Silverman (pictured above).  Marvel's Runaways, based on the popular comic book, will be part of the fall schedule, along with superhero/time-travel spoof Future Man from Seth Rogen (who contributed and narrated one hilarious opening sizzle reel about the use of opening sizzle reels), The First (Mars colonization saga from House of Cards creator Beau Willimon) and Hard Sun (end of the world-related crime tale).  Jeff Daniels will top the cast of The Looming Tower, a 9/11-themed adaptation of the Pulitzer Prize-winning book, while classic Stephen King tales and characters will be dramatized in semi-anthology Castle Rock, executive produced by King and J.J. Abrams.  Both series are targeted for premieres during the first half of 2018.  A second season of The Handmaid's Tale, which premiered last week to outstanding reviews, also is set for next year. (Handmaid's stars Elisabeth Moss and Samira Wiley are pictured at top.)  Hulu will introduce several new advertising features over the next 12 months, from viewers choosing which message to watch from a specific advertiser during breaks, to ads where viewers can click to information from a local dealer or affiliate of the product or service.  Benjamin Moore paints will be one of the first clients to use this approach.  Dynamic ad insertion for Live TV on Hulu also will be utilized, and 360-degree commercials where viewers determine the picture's direction by remote, smartphone or tablet, will be introduced in the near future.  Grade: 5 Jacks 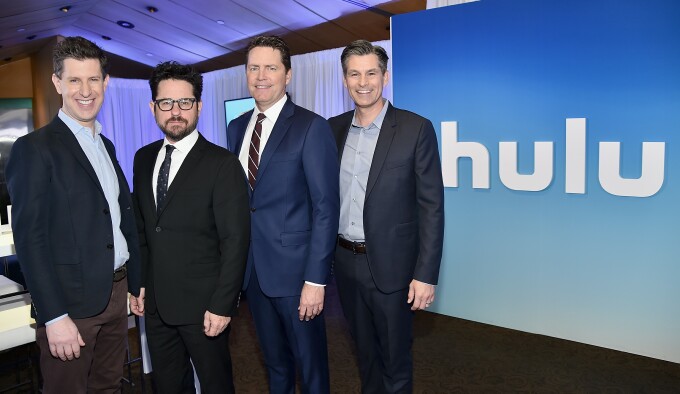 Star Time:  Besides Seth Rogen, Mindy Kaling (pictured below) was on hand with a funny sizzle reel -- stringing together the many times The Mindy Project sneaked in a sponsor reference.  "We've supported a lot of integration ... and there's no content on my show [about to begin its final season],” she said.  “I just hawk products and wear colorful outfits.  You want Mindy to go to the psych ward for Maybelline?  Okay!"  When Daniels came on to tout The Looming Tower, he acknowledged how new this series was. "They started shooting [here in New York] this morning.  This morning!" he bellowed.  "I hear it's doing well."  On a far less jovial note, Daniels promised Tower "will remind us how important TV can be." Silverman ended matters by reminding all present that "you are better men and women for sitting through this Upfront."  Grade: 3.5 Jacks 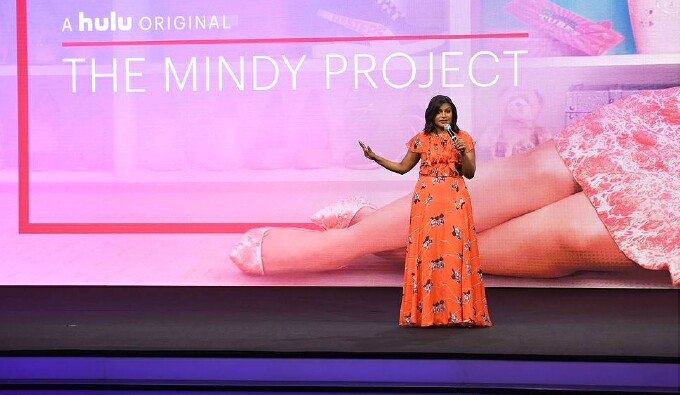 Cuisine:  Typical limited MSG breakfast menu.  Best eat: micro vanilla and chocolate pop-up donuts. Worst eat:  Not an “eat,” but there was no tea!  Why does MSG not consider tea a breakfast item?   Grade: 1.5 Jacks(Note: Cuisine ratings do not factor in to the overall Jacks score.)

Data Insight:  When Hulu started almost ten years ago, the majority of customers watched via desktop computers.  Desktop now accounts for only nine percent of views per month.  Smart TV sets and devices account for 75 percent of monthly viewership, with smartphones/tablets the rest.  Hulu's median age is 33, with $84,000 the annual household income.  Hours per view are up 21 percent from last May, while streaming activity is up 50 percent.  Grade: 3.5 Jacks

Innovative Opportunity:  Participation in interactive commerce over TV features, arranged under a partnership with Brightline.  Under a first phase this fall, viewers will be able to order movie tickets anywhere in the U.S., delivered to the mobile device of their choice.  Naylor expects to expand the commerce option several ways next year, involving retail and restaurant seating or food ordering/delivery.  Grade: 5 Jacks

Overall Grade: 4.5 Jacks Hulu had plenty of announcements to dish out in 60 minutes or less, while making its case for sponsor support. Mission accomplished in energetic and entertaining fashion.

(Special note: Here’s a hearty10 Jacks for Hulu's after-presentation talent brunch at La Sirena, Mario Batali's restaurant on 88 Ninth Ave. near Chelsea Market.  Whether member of the press or ad business movers and shakers, everyone got quality face time with show stars and producers, plus a top-notch lunch.  Loved the Scottish salmon with peas on a bed of green sauce.  Let's see more programmers do Upfront/NewFront events of this kind in New York throughout the year, and while we’re on the subject, here’s hoping Turner will consider bringing back its annual Upfront lunch with the stars press event. Extremely missed!)