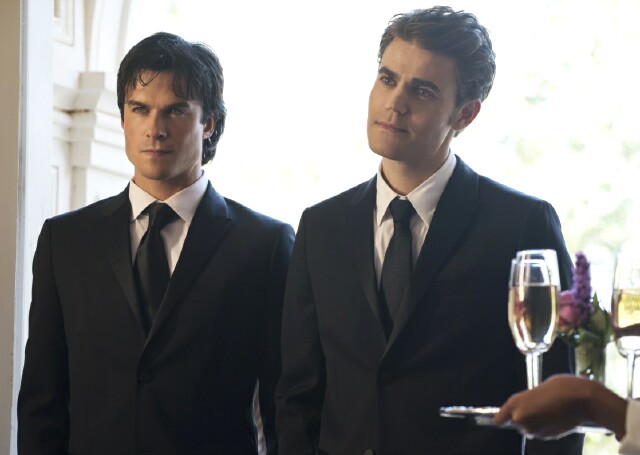 The men of The CW’s The Vampire Diaries recently gathered in Los Angeles for a press conference to bid adieu to the long-running series, which airs its series finale on March 10.  It was a time of reflection (and dejection) for the foursome as each lamented about the end of the series and reflected on the evolution of each of their characters over the series’ 171 episodes. Series stars Ian Somerhalder (Damon Salvatore), Paul Wesley (Stefan Salvatore) and Zach Roerig (Matt Donovan), all of whom spent eight very successful years together, were on hand along with Michael Malarkey (Enzo St. John), who joined in season five. (Somerhlader and Wesley are pictured above.)

The Vampire Diaries, created by Kevin Williamson and based on the successful book series by L.J. Smith, premiered on The CW in 2006, further boosting the vampire mania that took hold early in the new millennium.  Hot on its heels came the big-screen Twilightsaga along with HBO’s True Blood, and it was soon apparent fans of vampire folklore were not only ready to sink their teeth into anything vampire related, they were thirsty for all they could get.

“The vampire story is something that’s existed since Nosferatu and I don’t think it’s going to go away,” Wesley mused.  “It’s about creating an inventive storyline using that symbolism, but I don’t think people automatically watch something because its vampires anymore, like they used to.”

Over the course of the series, each of its core male characters underwent many transitions.  Good-guy Stefan would become the deadly Ripper; bad-guy Damon developed a modicum of empathy for the humans he once fed from and discarded like an old chicken carcass; Matt endured numerous personal losses and eventually found solace in law enforcement, and vampire Enzo, like Damon, would rediscover an appreciation of the human condition after finding love with witch Bonnie Bennett (Kat Graham). (Somerhalder, Wesley, Roerig and Malarkey are pictured below, left to right.) 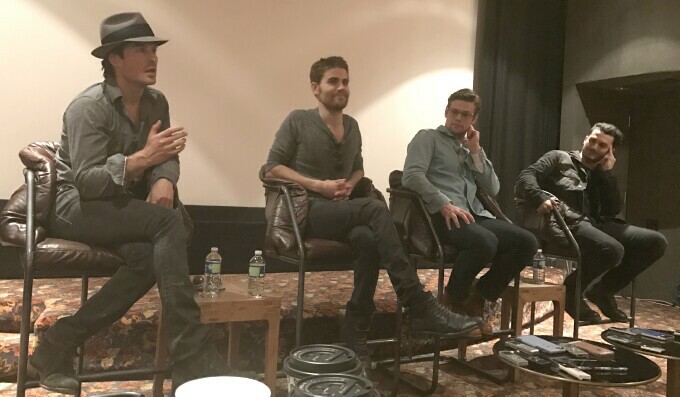 For the actors it was the continued evolution of these multi-dimensional, ever-evolving characters that proved an actors dream and something they could really sink their teeth into.

“I think it goes in seasons,” Somerhalder replied when I asked which of the many incarnations of Damon most appealed to him.  “I’ve been through a lot with [Wesley].  We shot 171 episodes of television, which is something like 80 movies.  So it goes in seasons.  Malarkey got here in season five, which is probably a pinnacle moment.  Matt’s whole role changed from the beginning of season seven and him becoming the law of the land.

“But I always loved season one,” he added. “I think that’s when the show really solidified itself.  All these characters were still innocent enough to the viewer and ourselves and it was just a well-crafted mystery.”

“I died like 17 times, killed 18,000 people and I’m still the hero,” joked Wesley of his character’s twisty arc.  “In seasons one and two there was so much mystery, which is why people would watch the show. But season three, selfishly for me, was very exciting because it was the first time in two years that I got to play a villain.  For me the introduction of Ripper Stefan and the genesis of that was the most exciting. “

Over the course of its run The Vampire Diaries has seen numerous central characters meet untimely ends. Most shocking was Elena Gilbert, the focal point of the show’s love triangle played by Nina Dobrev (who left show after six years). However, dying in Mystic Falls is never permanent, making way for a lot of familiar faces to return for the finale, including Dobrev as either Gilbert or her sinister doppelganger Katherine Pierce. (Exact details of how Dobrev returns have been closely guarded.)

“I think it would’ve been strange to not have Nina come back for the finale,” Wesley said.  “The crux of the story was two brothers fighting over a girl and it would’ve been a real shame for the fans and the show to not wrap that up to a degree.”

For each of the actors, shooting their final scenes were met with a myriad of emotion.  Wesley said he couldn’t help but get melancholy.  “It was just a combination of so many emotions, like this is the last script I’m ever going to read for the show,” he recalled. “I did get a bit teary-eyed and I’m really kind of a coldhearted bastard.

“When I finished shooting my final scene I had my eyes closed and someone sprayed Funfetti in my face,” he added. “It was kind of an emotional scene, I was crying and the next thing I have Funfetti in my eyes.  It was like, ‘What?’ Pretty funny.”

“As you were reading through it, you were kind of ticking boxes looking at how all of this was going to be summed up in one 44-minute episode,” Somerhalder said of the final script.  “But they actually [did it]. I think people will be pretty pleased with it.”

“I didn’t realize how affected I would be,” Malarkey admitted. “I’m usually all business when I get to work.  Julie [Plec, the series writer/executive producer] gave a great eulogy for everybody about our place in the show and I remember being deeply moved by that so I kind of spluttered through [my final scene].”

“I had quite an emotional scene to end on,” Roerig chimed in.  “So I tried to keep myself well calibrated to make sure my emotions were based in the scene and not because it was my last scene of the show.  I remember at the end Julie [Plec] could see my lip quivering, she just let me rip and I totally let it out.”

With the series wrapped, each of the guys shared details of a memento they kept from set.  Somerhalder and Wesley: “Our vampire day rings we’ve worn for the last eight years.” Roerig: “Matt’s trademark boots.”  Malarkey: “One of Damon’s jacket’s, although it’s snug.”

They’d also like it known that in this age of re-boots, nails have secured The Vampires Diaries in its coffin.  They are leaving the series to streaming services and re-runs for the rest of its afterlife.

“In this digital age television never really dies,” Somerhalder observed.  “It’s called Netflix, and in 10 years I’m probably going to be on a ranch in Wyoming and you’ll never hear from me again.  It’s good to close this chapter and really just let it be.  There’s something beautiful about closure.”

“New kids, young kids, are now just watching it for the first time like it’s never been out before,” Wesley added.  “But wouldn’t it be funny if we did do a reboot and we were all older, with gray hair?  No, that just wouldn’t work.”

The series finale of The Vampire Diaries follows an hour-long series retrospective beginning at 8 p.m. Friday, March 10 on The CW.