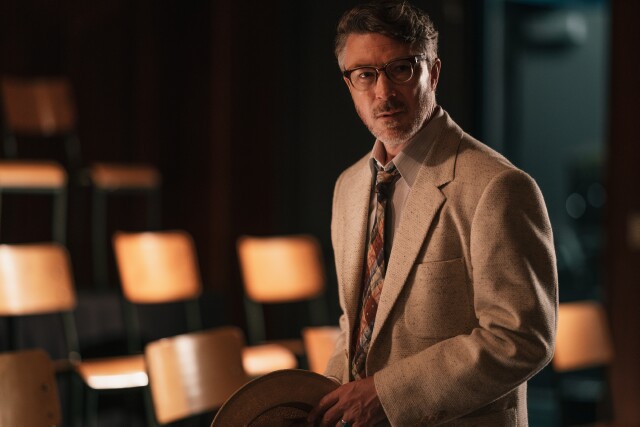 When HISTORY’s Project Blue Book returns for a second season on January 21, the action moves from external to internal, from space to Earth, and from the unknown to what we think we know.  Set during the Cold War, and inspired by true accounts, the series delves into the fear that results when conspiracists start spinning their theories.  At the time, as people saw an increasing number of unidentified flying objects they naturally reported odd lights and sometimes alien encounters to the authorities.  Beginning in 1952, the Air Force collected these reports, and as military agencies tended to do -- especially in the years following World War II -- they were classified in Project Blue Book.  Eventually declassified, those reports make up the basis for this series.

“Season one was all about, ‘What is that mystery up in the sky?’” Sean Jablonski, showrunner, executive producer and writer told me, referring to reports of people seeing scary lights at night.  Indeed, in the show's freshman season, viewers saw various people give harrowing accounts of their sightings and saw the budding relationship between Dr. J. Allen Hynek, played by Aidan Gillen (pictured at top), and U.S. Air Force Captain Michael Quinn (Michael Malarkey), both of whom know they are investigating very real phenomena.  Malarkey’s boss, General James Harding (Neal McDonough) is determined to keep everything buried and will go to any lengths to do so.

“Season two is going back to the beginning of where the conspiracy started, so the real mystery is on the ground,” Jablonski added.  “Now it’s about a cover-up.  There is more opportunity for conflict with the characters and more of a struggle.  Now the barriers come from the Air Force trying to shut down the truth and Area 51 being guarded by snipers.”

The series, which shoots in Vancouver, heads several hours north to Kamloops when the background needs to stand in for the desert.  Based on declassified documents about reports of visiting aliens, it has Hynek’s work at its core.

“He was an extremely clever, hard-working astrophysics professor in the Midwest,” Gillen said of his character.  “He was a family man who was plucked from relative obscurity to be the scientific mind of the United States Air Force investigation into what was becoming a phenomenon at the time and causing quite a bit of hysteria nationwide.  He was a very level- headed man, but a big thinker and very open-minded, and kind of perfect for the job.”

Gillen was prepping for an upcoming role at the Abbey Theatre in Dublin when he chatted with MediaVillage late on a recent night.  Now that he has lived with his character, he considers Hynek, who spent his career analyzing and scrawling advanced calculations on chalkboards, a true hero.  After all, the professor stood up to tough generals.  “He was a heroic person in our drama, and in real life, and he is certainly positioned in there as a kind of everyday hero,” Gillen said.  “He is driven and truthful, and his main goal is the pursuit of truth.”

Hynek has a true partner in his wife, Mimi, played by Laura Mennell.  Initially, Mimi “is a little sheltered in her world,” Mennell observed.  “Something’s missing in her life.  It's a little stagnant in that world of domesticity.  It’s nice to see her begin to find inner strength.  This season we will start to see a stronger, more inquisitive Mimi.  She starts to do research for Allen and starts to break that traditional ’50s mold.”

Project Blue Book could make a believer out of anyone.  Yet long before they signed on for this, the actors and showrunner each experienced close encounters of the third kind, which they shared exclusively with MediaVillage.

“I don't know what the heck it was,” Mennell recalled of a sighting over British Columbia.  “I was with my boyfriend, and we were looking up in the sky one summer night, and there was a very bright light, brighter than a star.  It seemed quite close.  It didn’t have blinking lights, and it was moving sort of in our direction at a normal clip.  Then it just stopped for a good 10 minutes.  It seemed out of the ordinary.  I was not the only one who saw it and who thought it was weird.”

Growing up in Dublin, Gillen was a fan of Star Wars and scanned the skies with his friends, hoping to “see something.”  Finally, they saw lights different from those on planes.  “We did try to report something to the press once, but they shied off because they didn’t have any other reports,” he said.  “It was probably a satellite or helicopters, but you don’t know.”

Executive producer Jablonski's conviction was cemented early on.  When he was 10, he was walking on New York City's Upper East Side and saw a spacecraft that remain etched in his mind.  “I saw hexagonal lights,” he said.  “I went home and drew a picture of long, thin hexagons, three on one side, four in the middle, three on other.  I remember thinking: ‘Am I seeing what I am seeing?  Is it a plane?  A blimp?’  It did not make sense.”

As a writer and producer on shows includingLaw & Order and Nip/Tuck, Jablonski has long written dramas based on real events and circumstances.  Given that Project Blue Book draws from declassified documents, this drama continues in that vein.  He hopes the audience comes “to love these characters.  I want them to find a reason to love the show."

And he has another goal.

Project Blue Book is telecast Tuesdays at 10 p.m. on HISTORY.