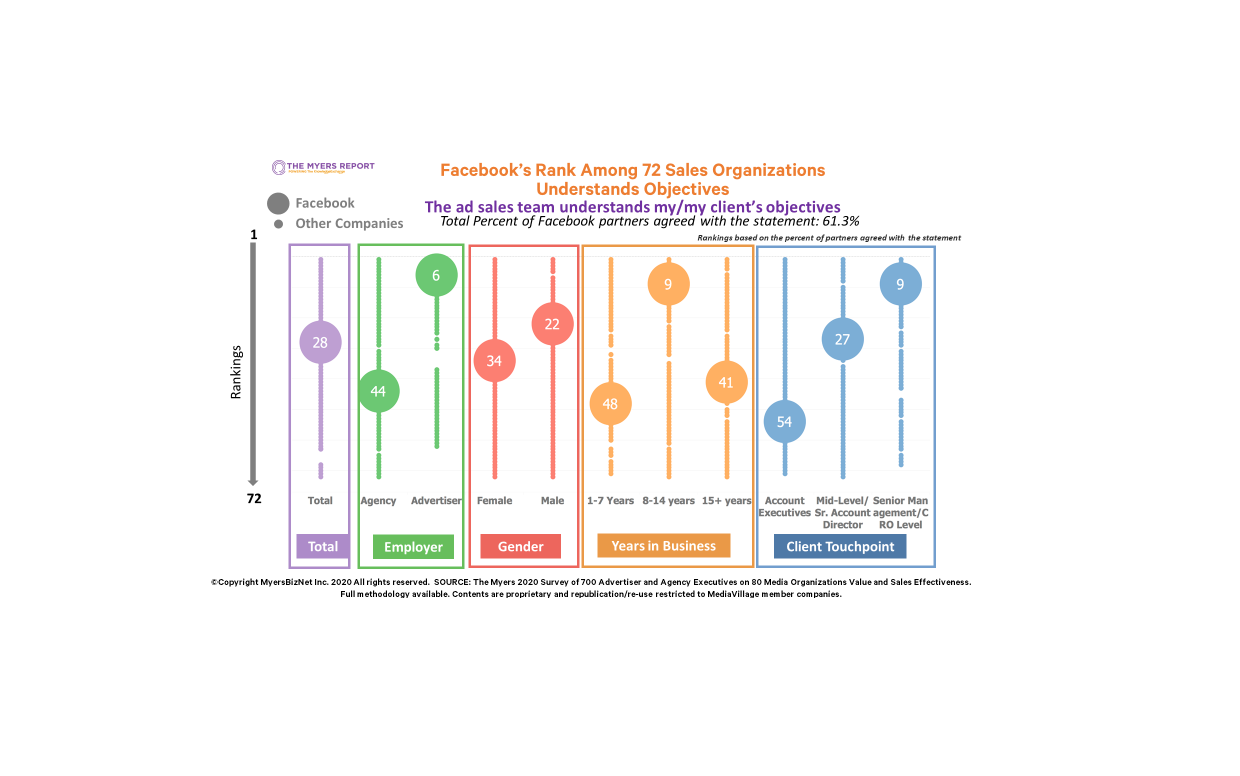 Facebook's heralded dominance in the national advertising marketplace may be threatened by declining trust and satisfaction among media agency executives, according to a new Pre-COVID-19 survey of 700 advertiser and agency professionals conducted by The Myers Report for MediaVillage members. The Myers Report survey details and methodology are available here. Six-hundred agency and 100 advertiser decision-makers and influencers responded to the survey, rating 72 sales organizations with which they have a business relationship. The study results suggest a significant schism in perceptions toward the Facebook sales organization between brand advertisers and agencies, males and females, and senior vs. junior executives. 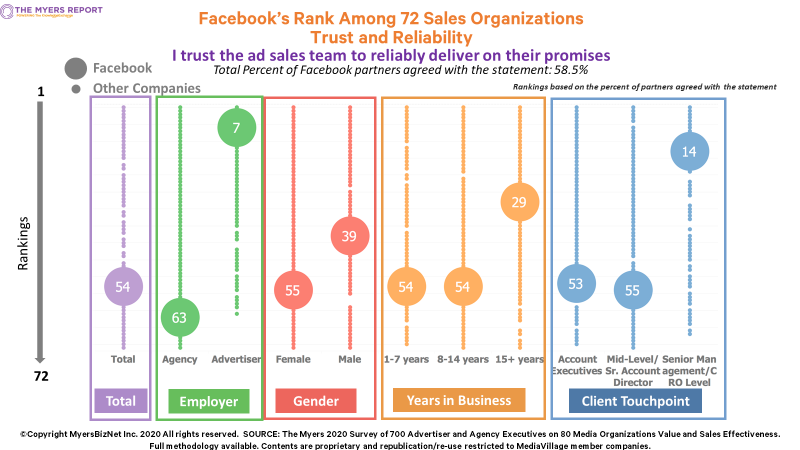 A more thorough exploration of the data uncovers the differentiated priorities apparently assigned to specific Facebook sales organization levels, from AE to CRO. A case in point is the clear separation of perceptions of Facebook as a trusted and reliable partner. Facebook is ranked 62nd among 72 media sales organizations by agency professionals but jumps to 7th among advertiser respondents. The advertiser base reflected a cross section of top 200 national and regional advertisers. Similarly, male respondents ranked Facebook 39th for trusted partner compared to 55th ranking among females. Facebook ranks 29th for trust among those in the business 15+ years but drops to 54th among younger teams in the business one to 14 years.

In an unusual research twist, The Myers Report asked respondents to identify the seniority of their primary contact person at each sales organization with which they're in a business relationship, enabling the sales organization to uncover the effectiveness of its respective teams in delivering against each of the nine organizational performance attributes measured by The Myers Report. For the category Understands Objectives, Facebook is ranked 9th in the industry among respondents whose primary "touch-point" or contact is Facebook senior management/CRO level.  But the worm turns for Facebook among those whose primary contacts are at the more junior level. They rank Facebook 54th. Looking more deeply uncovers the logical connection that advertiser respondents rank FB 6th overall for understanding objectives vs. agency professionals, who rank FB 44th among the 72 organizations evaluated. The sweet spot for Facebook's senior management contact appears to be among the mid-management teams at advertiser companies, a group typically ignored by legacy media. 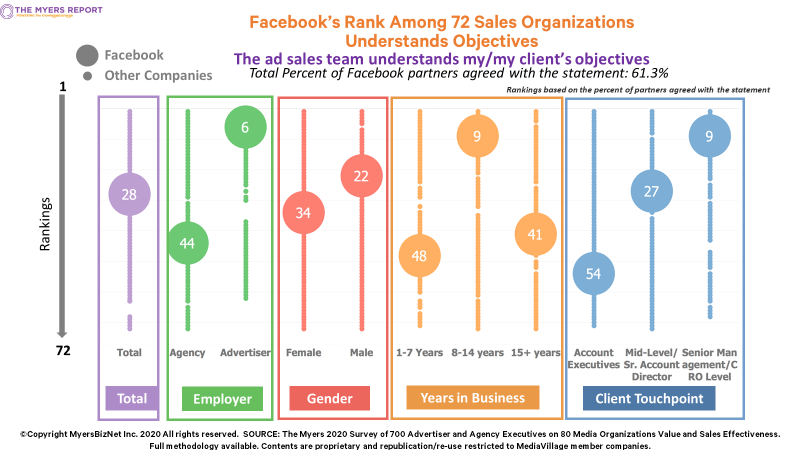 The full report detailing the comparative performance of 72 media sales organizations is being presented to MediaVillage member companies who underwrite The Myers Report industry studies. MediaVillage is an activist platform for advancing media industry growth. Since 2010 alone, marketing budgets have declined nearly $100 billion. The Myers Report identifies strengths, weaknesses, obstacles and opportunities for the industry, industry categories, individual media companies and content brands. An area requiring media company attention, says The Myers Report, is trade marketing and education. The media and advertising industry underinvests in content marketing by an average 500% compared to other major industries, as reported by trade organization sources. Among the nine attributes measured by The Myers Report, effective trade communications ranks last in overall positive perceptions, with a median positive rating of only 39% for the 72 companies measured. That has left an opening for Facebook to target brand advertiser decision-makers and influencers targeting procurement, finance, in-house agency teams, in addition to aggressive engagement with senior marketing leaders through their support for several industry organizations 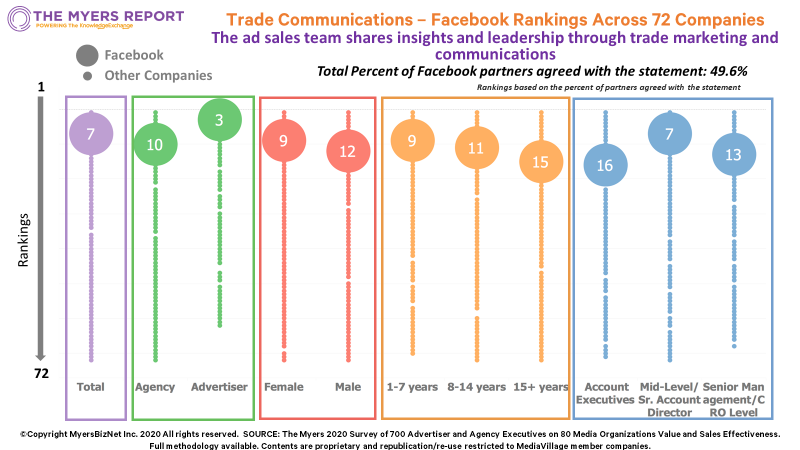 The company's Chief Revenue Officer David Fisher serves as Chairman of the Ad Council Board of Directors, a highly visible, influential, and connected role. Carolyn Everson, VP Global Marketing Solutions, is among the marketing community's most visible and popular executives, representing the company on several industry boards. (Disclosure: Facebook is an underwriting member of the Advancing Diversity Council, founded by MediaVillage chairman and The Myers Report publisher. Facebook is not a MediaVillage member.) Facebook has a seat at the table – and is often at the head of the table -- for many major industry-wide business initiatives. Some of these initiatives, say several media sales executives, may be fundamentally at odds with Facebook's own interests, yet Facebook executives are actively engaged in the planning and implementation of those initiatives. These executives question the appropriateness of Facebook's involvement, yet the company's relationships with brand leaders and their generous support for multiple organizations seems to assure their continued leadership. Arguments can reasonably be made to both defend and argue against Facebook's leadership. During the recent Jack Myers Leadership Conversation on Advanced Television, a discussion on walled data gardens emphasized the importance of television industry collaboration [to compete with Facebook] by enabling standardized automated addressable and data driven media buying. Otherwise, as Comcast Advertising president Marcien Jenckes commented, "My fear is that unless we unite, we will be painted with the brush of the weakest player within TV. And if that's the case, then we can all start the clock right now." 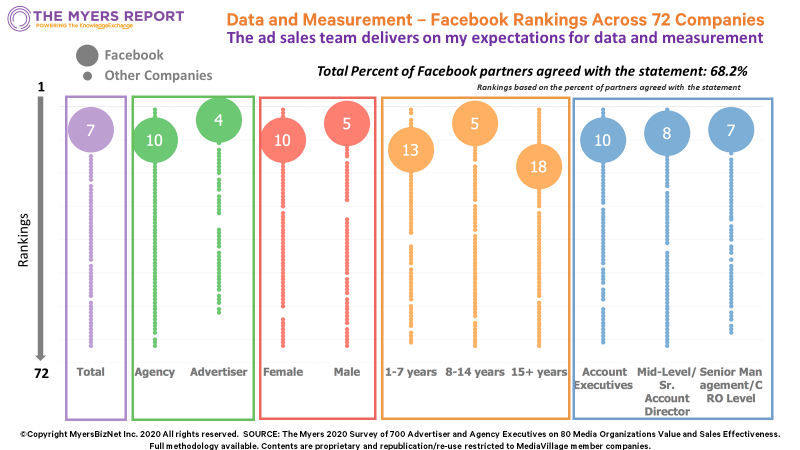 So does Facebook have a weakness to be exploited? According to The Myers Report survey results, the answer is yes, although it's unlikely data will be its downfall. For the attribute "The ad sales team delivers on my expectations for data and measurement," Facebook ranks among the industry leaders across all respondent groups.

Media company and agency leaders will be determining within the next 24-months whether and how to embrace television's vision for the addressable future that is now being scaled and evangelized. For the first time since the late 1990s, the enthusiasm for targeted data driven TV buying is gaining momentum around industry collaboration and consensus. Agency executives, according to The Myers Report survey, are dissatisfied with Facebook's support services and receptive to advocating for a shift of budgets back to a reinvented TV business. If the industry can coalesce to compete effectively, which is questionable based on history, Facebook appears to be a vulnerable target. 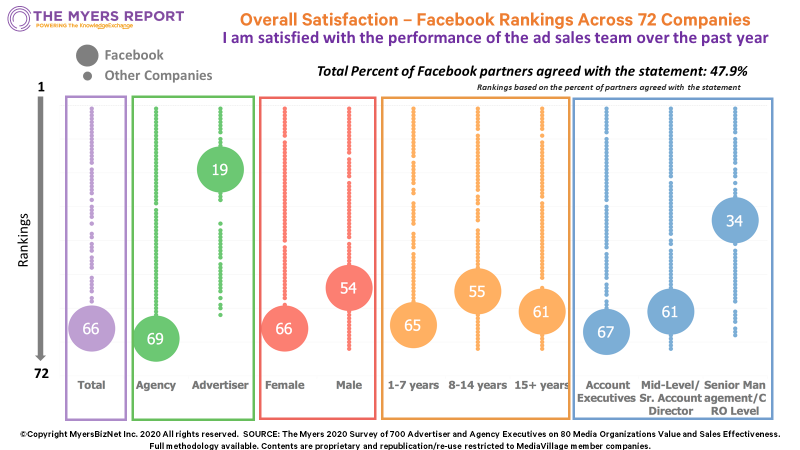 Among 72 media sales organizations studied by The Myers Report, Facebook receives the third most negative ratings (bottom 2-box on a five-point scale) for Trust, Proactivity, Instilling Confidence and Overall Satisfaction. This is heavily weighted by agency respondents, who rank Facebook 69th and Instagram 70th for Overall Satisfaction. The television industry may have an open path to collaborate with agency partners to build a competitive message focused on selling television's competitive strengths. The simple question needs to be asked and answered. What do predominantly younger, female media agency teams see and understand that advertisers either don't see or don't consider to be relevant…and vice versa?