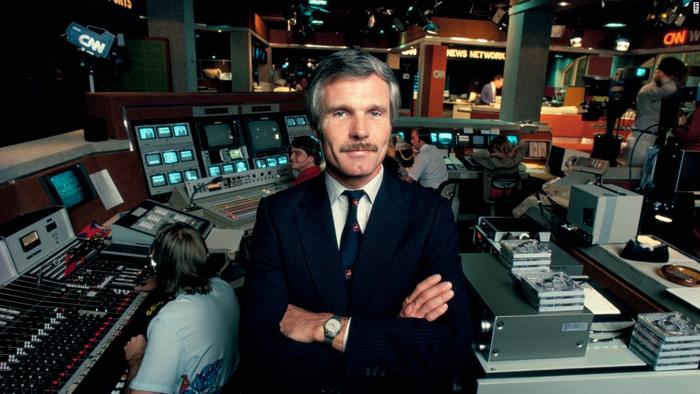 And there I was in Atlanta, on the front lawn at Tara on Techwood, watching as one of the world's greatest ever yachtsmen told us to listen to a military band play Nearer My God To Thee, and then watch him (AKA Ted Turner) turn on Cable News Network for the first time about 6 pm on a sunny June 1st warm late afternoon. A camera crew taped it all, then packed it away to use at the end of the world.

Yeah. It was just that much ego on that humid day.

I'd known Ted for quite a while. On Friday evening, December 17th, 1976 when Ted's WTCG ("watch this channel grow") went live on a satellite and Super (channel) 17 became the first real Superstation, I watched the move to satellite with him. Back then, I was the editor of CableVision Magazine which, as you might guess, tracked the growing but not yet exactly huge cable TV industry. Ted had lots of billboards, the Atlanta Braves and more. But then, he was always restless.

Three and half years later, I was in Atlanta to watch Ted change the world of television as much as he'd changed the world of yacht racing (America's Cup, Fastnet, America's Cup and more winners) … he had flown into Atlanta that morning from Newport Beach.

He sure wasn't alone there. One of cable programming's first stars, Bill Tush, was wandering about with skeleton crew interviewing one of the guests … such as Brian Lamb, who had not that long ago managed to launch the Cable & Satellite Public Affairs Network (C-SPAN) after talking the House of Representatives to allow access to the floor as well as convincing almost every multiple cable system operator (MSO) to carry the network and pay for it. Bill Daniels, my long-time friend and mentor, was there smiling and talking with Irving Kahn, the once disgraced but now again respected cable operator (and great gourmand). A few MSO chiefs were wandering around, too.

I was there to begin the promotion of a planned September launch of an industry newspaper backed in part by Capital Cities via its Fairchild subsidiary. HBO and CNN agree to advertise as I wandered the grounds telling folks Multichannel News would launch at the Western Cable Show in September (it did; it is still around; I left in 1985).

Since 1980, the world and the media have continued to evolve. The new quickly gained ubiquity … and Ted wound up with two 24-hour news channels after Westinghouse/ABC made an abortive bid to supplant CNN with Satellite News Channel renamed Headline News.

I was reminded of being in Atlanta for that real change in viewing habits and information availability while reading Up All Night by Lisa Napoli. It's an engaging, amusing, and entertaining look at Turner and how he accomplished so much. CNN is a global phenomenon today … CNN International news network can be seen in more than 150 million television households and hotel rooms in more than 200 countries and territories worldwide, via a network of 38 satellites. (Thank you, Bob Ross and other CNN missionaries.)

More companies started many more channels … Ted launched Turner Network Television (TNT) and Turner Classic Movies (TCM - the result of overreach buying a movie studio and having to be bailed out by a number of MSO chieftains … but Ted did wind up owning his favorite movie, Gone with the Wind). And the cable subscription prices jumped with each accumulation. Too often, too much. So cable changed, morphing onto and into the internet. The growth of cord cutting chopped away at the cable programming bundle; not the cable provider. That internet "cord" has staying power.

Random Notes:
• Broadband over TV? Well, perhaps. The Federal Confusion Commission's Brendan Carr wants a declaratory ruling coupled with a NPRM (Notice of Proposed Rule-Making) June vote. Seems that last year at the real, live National Association of Broadcasters show he suggested that ATSC 3.0 (otherwise known by four Las Vegas TV stations that just went live with it as "Next Gen TV") protocols could deliver a 25 Mbps data stream. Carr called it a "one to many broadband pipe. Making over-the-air broadcasting a broadband broadcasting of sorts. For details, check out Multichannel News, May 21st. (Yep; the one I started with Capital Cities.)

• Did you see the letter the IRS sent to recipients of the CARES Act Economic Impact Payment postmarked earlier this month? So very cool … actually signed personally by the President of the United States and sent by the very USPS he doesn't like! Most impressive. I'm tempted to frame it!

• Something for your radar screens: Amazon and local podcasts tied to Amazon's Echo … like a radio workaround with instant access.

• Did you subscribe to HBO Max? Want to know the differences among HBO Go, HBO Now and HBO Max? Don't worry, you'll just get the most expensive version.

• Is the dam breaking? AT&T says it will refund whatever the leagues send it to out-of-market subs. Next?