It's Beautiful: More Women are Rejecting Anti-Aging and Embracing Aging 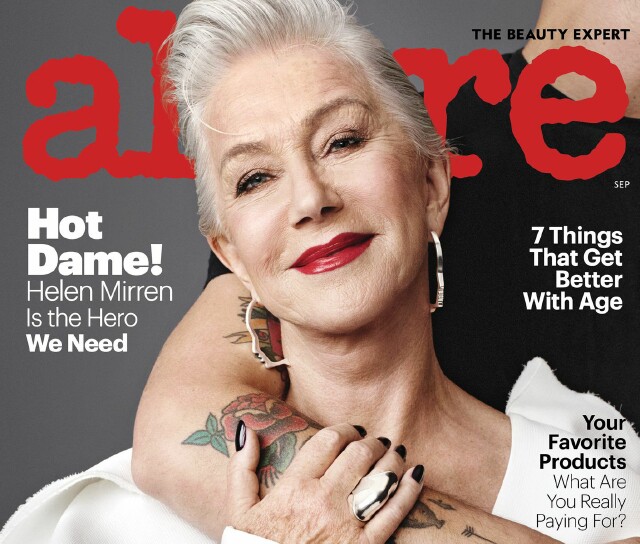 While rubbing a pricy "anti-aging" lotion on one's face is seemingly harmless, the social effects run much deeper. Beyond the fact that much anti-aging beautification is scientifically baseless, its promotion is inherently ageist as it casts getting older as a negative experience and older people in need of a reversing effect. Anti-aging turns the entirely natural development of wrinkles, gray hair, and other biological markers of age into enemies to conquer. Rather than embracing aging as a normal and positive thing (the alternative being death), in other words, we are being told to fight aging off as long as we can and, if possible, make the inconvenient truth go away.

This is not just a bad message to hear but an anti-human one that is doing much to encourage ageist thinking and practices. "If the beauty industry is any indication, the whole world seems to believe that aging is a bad thing," noted curology.com, correctly thinking instead that "aging is a privilege." Women are the primary target of skin creams and, through language and imagery, marketers tap into their fears of being deemed less attractive and less desirable in a society in which youth still prevails in terms of bodily aesthetics. Even though just the opposite is true -- older women are more mature, confident, and powerful than when they were younger -- the anti-aging narrative is about decline and irrelevance, contributing to and reinforcing ageist beliefs and actions.

Fortunately, a backlash against anti-aging is in the works, being led by a surprising source. In September 2017, Allure magazine, a publication best known for telling readers how to be, well, more alluring, broke with the ranks by committing to no longer using the term "anti-aging."

Editor Michelle Lee wrote that it was time for a "celebration of growing into your own skin -- wrinkles and all," seemingly either a brave decision that might alienate advertisers or a clever marketing ploy to get media attention and perhaps take advantage of an aging reader base.

Allure emphasized its message by putting 72-year-old Helen Mirren on the cover, labeling her as "the hero we need." Lee made it clear that the magazine would not stop promoting products that claim they can make women appear younger, but rather change the way it discussed aging.  Indeed, in the very same issue readers could see an ad for a new L'Oreal moisturizer that "stimulates cell turnover from within" so that users could "get [their] rosy tone back." And who was featured in the ad?  Helen Mirren.

While Allure was obviously sending a literally mixed message by simultaneously challenging and endorsing anti-aging, introducing the conversation into the beauty community and larger society was a step in the right direction. (The magazine's action was widely covered by the general media.) The mainstreaming of Botox had by then made anti-aging uncool and, more importantly, served as visible evidence of how fighting the physical effects of aging was ultimately a losing battle. It remains to be determined whether we've turned a corner in our attitudes about getting older (anti-aging beauty products are as popular as ever, as is the effort to extend our lives through radical therapies), but at least there are signs that an "anti-anti-aging" movement is in the works.

Aging is Coming Back in Fashion

Nancy Trent, the head of a wellness public relations firm specializing in the cosmetics industry, sees only upside in marketers taking a more positive view of older consumers. Trent calls the cohort (made up of baby boomers and older Gen Xers) Generation Silver (or just Gen S), reflecting not just the typical hair color of the market but the fact that it has by far the most disposable income of any. (80% of them are even covering at least some of the expenses of their adult children, according to NerdWallet.) "Aging is coming back in fashion," Trent stated in 2020, thinking that Generation S will serve as "influencers" because of their great numbers and immense spending power.

If the cosmetics industry is any judge, aging does indeed appear to be becoming more fashionable. Marketers in that business around the world have historically focused on the youth market but are now increasingly shifting their attention to older consumers as the global population ages. While anti-aging is an oxymoronic concept, there's nothing at all wrong with using a product that can enhance one's appearance. The market for makeup, lotions, lipsticks, and foundations is growing fast as older consumers buy products that have been produced with their bodies in mind. As Allure's bold stance against anti-aging suggests, the emerging narrative of beauty is less about hiding the "bad" and more about bringing out the "good."

Shiseido is one company going after the 50+ market, having created a dedicated line of products under the brand name Prior. Yuki Kawai, the brand manager of Prior, says the question that should be asked (by anyone) is "What's beautiful about my age?", a wonderful way to view the inevitable process of getting older.

Getting Older and Looking Better

Not just cosmetics but fashion too seems to be warming up to the silver market.  "Perceptions about what's ‘age-appropriate' are shifting as designers, retailers, and celebrities like Heidi Klum (47), Jennifer Lopez (51), Halle Berry (54) and Angela Bassett (62) are encouraging a rejuvenated approach to fashion." A 2020 article in O: The Oprah Magazine read, happy to report that, "these days, women are proving that getting older and looking better than ever go hand in hand."

The implications to and opportunities for the media, marketing, entertainment communities are clear. Corporations, organizations, and individuals have a responsibility to address ageism by featuring the positive roles of older women in business, society, and culture.  Especially in recognition of International Women's Day on March 8 and National Women's Month (March), consider ways to advance advocacy to activism by demonstrating a genuine commitment to women of all ages.