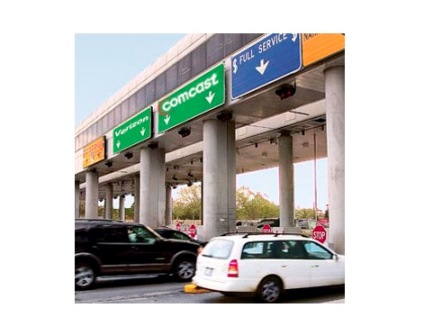 On May 15, 2014, the FCC voted to move forward with considerations on a proposal for new rules known as "Open Internet" rules -- the new name for Net Neutrality. If you are a provider of Internet services, nothing has changed. You still get to do business exactly the way you have been. If you are a concerned citizen wondering how you can compete and prosper in a world where ISPs charge for the "fast lane," you still have time to make your case.

Back in 2010, I wrote this article to help get the discussion going. Right now, the FCC's current ruling should highly motivate all interested parties to get into the discussion. Here's a way to think about it.

There's still an ongoing battle between Level 3 and Comcast. It's a good example of the kind of issues that are intended consequences of the Net Neutrality debate. Netflix uses Level 3 to deliver its videos to customers. It pays Level 3 for bandwidth. If you are a Comcast customer, you pay Comcast for bandwidth. In theory Level 3 is getting paid and Comcast is getting paid and everything should be fine. However, in order for your Netflix movie to arrive at your Comcast-connected home, the bits have to pass from Level 3 to Comcast. If you're Comcast, this is an excellent place to put a tollbooth.

Up to now, Level 3 and Comcast have had an arrangement that allowed each company to send bits bidirectionally. The arrangement was made back when both companies sent about the same amount of bits to each other. But now that Level 3 is sending more bits through Comcast than Comcast is sending through Level 3, Comcast wants to be paid. This is the nature of the current battle in its simplest terms. But, like I said, it's a smoke screen.

The cliché description for the public Internet (courtesy of Al Gore) is the "Information Superhighway." It's a reasonable metaphor for the way information travels around the Internet. Even engineers like to call bunches of bits getting from place to place, "traffic."

In the physical travel world, you can get from place to place several different ways. You can walk, ride a bike, take a car, take a bus, take a train or fly. Of course, while some places are only accessible by air, we all know that remote locations very often require us to use multiple modes of transportation. Now, imagine that people are bits.

The physical transportation world also has a fairly well defined class structure. It is segmented with modes of travel that efficiently meet the needs of each constituency - and it is economically segregated. You are about as likely to find an Upper Eastside Socialite in the lounge at the Port Authority bus terminal waiting for a bus to South Carolina, as you are to find a single mother of six on welfare in the Admiral's Club at JFK Terminal 8 waiting for her first class seat to the Vineyard. It happens, but not often. Most of the time, modes of travel: air, train, bus, car, bike, feet, are a function of economic class, means and emergent need. So, to keep the metaphor going, imagine that Comcast is Cathay Pacific Airlines and Time Warner Cable's basic broadband service is Amtrak and Verizon's low-end DSL service is Greyhound.

How would we expect the economic landscape to look in a world where, instead of one Information Superhighway, we'd have web of public and privately owned Information Super Toll Roads? Would we expect people who could only afford Greyhound bus service to do business with companies in Europe or Asia? Would we expect people who could only afford Amtrak train service to compete with people who could deliver merchandise overnight via air? Would organizations that own toll roads make it just a little too expensive to compete with them? Would organizations that own airlines charge competitors for extra bags and bigger seats? Keep asking travel questions, they all apply!

It is hard to be optimistic about a future world where there is a low-powered free and open Internet and a web of private toll roads owned by non-governmental organizations that inherently compete with their customers. The specter of such a world bodes ill for innovation, entrepreneurship and, in some ways, even the doing of digital life. That said, regulating pricing for Internet Service Providers will seriously dissuade private investment in the infrastructure we need to move America into the Information Age.

This line of thinking begs for the question: Will a plurality of Internet under-classes evolve? Want a current day analog? Look at the prepaid mobile phone business. It's huge, and so unstructured that even the service providers don't know who is using their products or how they are using them.

Back in the day, phone companies charged us for making calls, but receiving a call was free. This was a function of technology, not desire. As soon as cell phones hit the market, we started paying for time used (bandwidth) both coming and going. What's happening with Net Neutrality is a fight over exactly the same issue. Now, we pay for the bandwidth we use on one end. If this goes the wrong way, we (you and I) will pay for bandwidth both coming and going. On a personal level, this is not onerous. However, at the enterprise level, if we were to govern America for the best possible GDP (as opposed to governing for corporate profits) it has the potential to be a huge problem.

I am NOT advocating any government involvement with the Internet. I think government has proven that it has no business being in any business. However, this is not a debate you can leave to others. Get your elected officials on the phone. Take a few minutes to learn about the issue. This is the moment that we have to step up and become architects of our digital future. Become part of the solution ... America needs you!