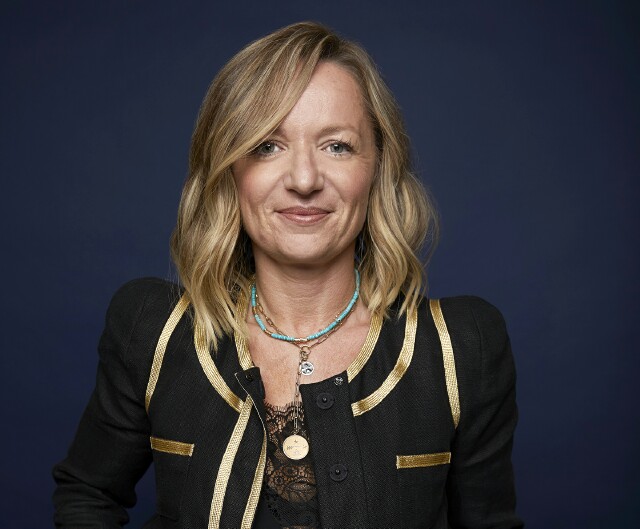 When people reflect on their careers, conversations tend toward the serious.  Even those who love their work can sound coldly detached.  However, when Izzie Pick Ibarra (pictured above), executive producer and showrunner of Fox’s The Masked Singer – the first new hit television series of 2019 -- reflects on work she frequently breaks into laughter, even when talking about difficult times.  Pick Ibarra is, as she puts it, “in a very happy place because I just did a show that I was allowed to let loose on.  I had great support from Fox.  I feel really creatively fulfilled.”

The wacky talent competition, based on a South Korean show, feels like a psychotropic field trip as imagined by Salvador Dali.  The contest combines the basics from What’s My Line -- celebrity judges (Robin Thicke, Ken Jeong, Jenny McCarthy and Nicole Scherzinger) puzzle out who is behind the elaborate masks and costumes -- with a touch of The Voice (another music competition series with a woman serving as executive producer), as judges and the audience cannot see contestants.  The idea is to identify them by their singing.

Some voices, such as Terry Bradshaw’s, blessedly, don't ring any bells.  Ensuring the secrecy until the shows are broadcast on Wednesdays, overseeing the writing and managing the controlled zaniness has been a perfect project for Pick Ibarra, who also was an executive producer on ABC’s Dancing with the Starsand The CW’sBreaking Pointe.  She spoke exclusively with MediaVillage about her career and breaking through to the top.

Jackie Cutler:  What are your responsibilities as showrunner?

Izzie Pick Ibarra: God, I wish I knew!  They run the gamut.  The first thing is tuning your vision so everybody else, the network and your team, understand it.  What do I bring to the table that is uniquely my experience?  Why is your particular take of an idea the most important thing?  You should be able to sit in a room [with] people coming in and saying, “What are you going to do about this?” and be able to answer in split seconds.  And, be a great decision maker and inspire your team.  I don’t believe in ruling by fear.  I believe in ruling by kindness and having everyone around me feel this is a safe place.

Jackie:  Did you have mentors?

Izzie:  I used to have quite a few, and I have been thinking I would really, really like to find one.  I think, funnily enough, as you go up through the ranks, there are not that many women above in far, far more senior positions that I have a lot of contact with.  I had three fantastic female mentors when I was starting out who moved heaven and earth to give me opportunities that I am incredibly lucky to have.

Jackie:  What was the best advice you received?

Izzie:  To just pull off the Band-Aid and give it a go.  Don’t overthink things and just trust your gut.  It is all we have.  One person did something to me that at the time I thought was horrendous.  I had never produced a live show before, and I was working on Big Brother.  I was a live producer and had worked on documentaries.  I went into the control room to get something, and my executive producer said, “Sit down. You might as well get your live show wings now.”  And he left!  It was the most terrifying thing.  I sure as hell concentrated.  It was a great way of making you learn and absorb.  After that, I could produce a show live.

Jackie:  What about some of the times you crashed into that glass ceiling?

Izzie:  I have been in boy’s clubs before, and I tend to leave the job.  If I don't like what I see around me, I don't believe that I single-handedly can smash that thing down.  Not wanting to work in certain environments is making a stand.  You can choose to stay in an environment that is slightly hostile, where you are not going to get the credit, or you feel a little uncomfortable and maybe feel a bit victimized or say, “Screw that!  I am not going to give you any of my ideas and go somewhere else.  That is much more liberating.  I did that, and it is the best feeling ever.

Jackie:  What was your background that led you to TV?

Izzie:  I studied German literature, and I was at Exeter.  My uncle, David Royale, an Executive Vice President at Smithsonian Channel, did a series on A&E, Target Mafia.  I was given an internship at 18.  It was 1989, and I was shipped off to New York.  I was living in Harlem working on 42nd Street across from the bus terminal.  My uncle was a hard-core doc maker.  I was sent to a meat market to find Lucky Luciano’s former prison warden and sent to a maximum-security prison.  My uncle was, “Ah, you will be fine.”  That was my first foray into TV, and I was hooked.

Jackie:  What advice do you give to women new to the business?