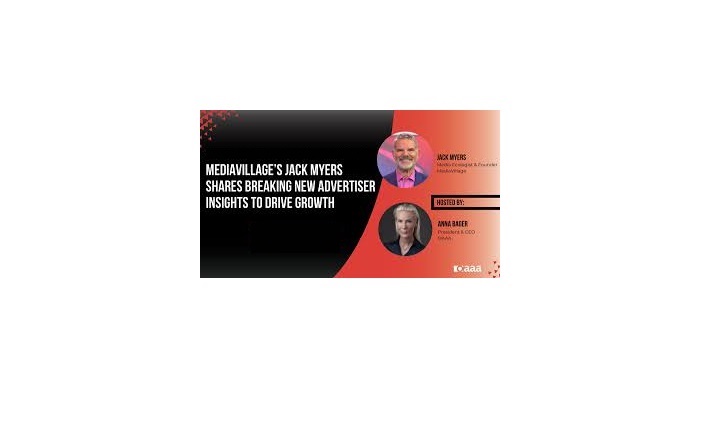 MediaVillage founder and media ecologist Jack Myers said, "Out-of-home is a perfect place for creative agencies to start looking for more creative approaches" in a conversation with Anna Bager, the president and CEO of the Out of Home Advertising Association of America (OAAA). The interview is available to watch on-demand. "Creativity is alive in the OOH industry like in no other medium," said Myers. "That's a number one opportunity as you look at the drivers of growth."

Myers began his career in the 1970s by selling Bus-O-Rama ads in New York City, and he refers to those years as "incredibly formative." He was the first to ever sell a "Total-Total" bus contract (to Gordon's Gin), which was the industry's name for an ad buy that included the entire interior and exterior space of the bus. He was also the first to sell "Basic Bus," the descriptor for one advertiser owning all interior bus ads, with The New Yorker (Yes, The New Yorker) and Bowery Bank being the first to optimize the value of Manhattan bus riders as valuable audiences.

He said OOH's unique value proposition is how creativity is inseparable from the medium, unlike with other media such as radio, TV and digital advertising.

"I had no data, nothing other than ideas," said Myers. "That's where I really learned that, whether I was going to sell ads to the local priest in the Bronx to promote a Feast, the Chinese restaurant in Queens, The New Yorker, Gordon's Gin, or Bowery Bank, it was always the idea that sold."

Myers backs up his faith in OOH with the latest data from his new Myers Report among Advertisers and Agency Executives.

"There is absolute inconsistency among the different stakeholder groups," said Myers on the report's findings. "Very few companies other than Amazon, Netflix and one or two other OTT streaming TV video companies are perceived equally by advertisers and agencies."

The data is alarming in that it shows how data-driven media such as digital advertising often is not equipped to satisfy the needs of media buyers for a variety of reasons. These include privacy issues, fraud and waste and intermediaries taking a large share of the profit.

Bager said, "If you're investing in digital, especially programmatic, you will have 30% to 40% waste on your dollars, whereas in OOH media you know that the ad will render pretty much 99.9% of the time -- it's there, it's physical, you can't skip it or block it."

Myers further noted intermediaries are taking as much as 50 to 60 cents out of every dollar between what the advertiser spends and what the media gets. "That's been a problem with digital for many, many years, and it doesn't seem to be resonating as an issue as it should be," he said.

The data also reveals trends in diversity. Nearly one-quarter (24%) of agency buyers and planners are diverse, according to the study, signifying a certain amount of progress but also an area where the OOH industry can further improve.

The research shows how different the backgrounds of the current decision-makers are from just a few years ago. For example, two-thirds of advertiser decision-makers have no marketing experience. "Procurement people and brand managers are spending 2% of their time in media," said Myers, adding that the biggest issue for agencies is getting time with people who own the budgets. "Their number one source of brand managers' knowledge about media is LinkedIn Learning, Bing, and Google, and they rated those 3 to 4 on a scale of 10 in terms of usefulness." He hopes to change the dynamics with the AI-based content recommendation engine Meetingprep.com, which comes with its own $1 million OOH advertising campaign.

Bager and Myers discussed what can be done to increase OOH's share of the media landscape from the steady 4%. Necessary steps for OOH media post-pandemic include:

According to Myers, five to ten years from now ad buying decisions will become media-neutral. The strengths of OOH -- audience reach and creativity -- will determine its position in the media landscape.