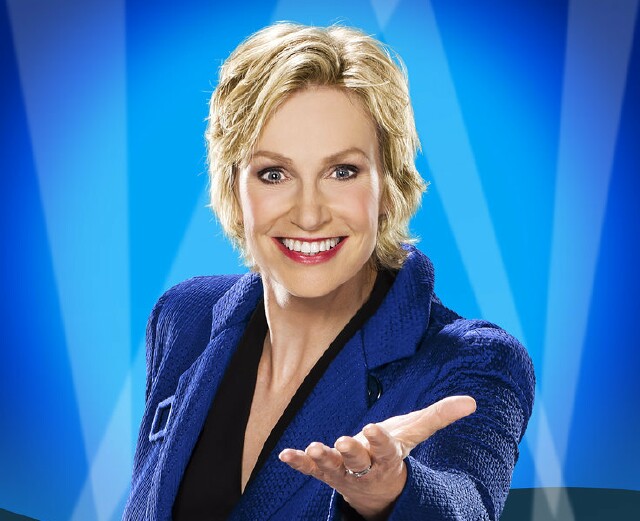 For four seasons Jane Lynch has been having a hoot inviting viewers into her palatial Hollywood hills home on her hit NBC game show Hollywood Game Night.Going into its fifth season, keeping the show fresh was important to Lynch who, along with the show’s producers, is excited for viewers to see what’s in store. Lynch has done a little redecorating; overhauling some of the games, introducing some new ones and for the first time ever opening her spacious backyard to the celebrity contestants.  “I have a backyard,” exclaimed a joyful Lynch when I visited her recently at home.  “Well, I’ve always had a backyard but I’ve had it renovated.

“It’s all drought-tolerant and the pool is full of little balls,” she continued.  “We’re being ecological in that regard and we have new games! ‘Smash The Buzzer’ is a lot of fun; it’s like having a dream where you’re trying to run but you’re running through mud.  You think you’re going to speed towards the buzzer and you slow right down, but the balls do give you some traction. 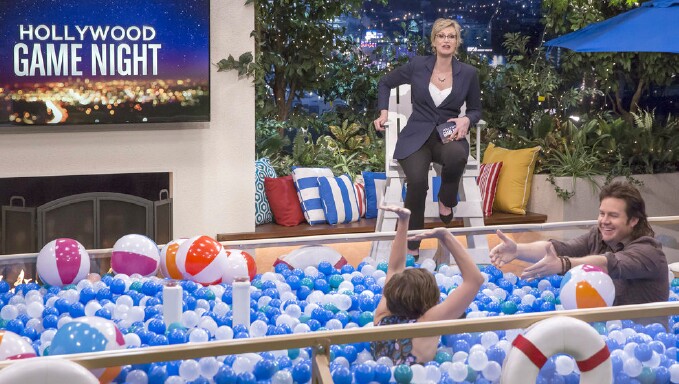 “I think ‘Seven Seconds of Frame’ is maybe my favorite new game,” she added.  “I installed three guillotines in the backyard [for that game].  It’s a part of my art gallery and as the paintings slowly come down you have to list off items in a category.  I’m immortalized on the pictures that drop-down, all inspired by the masters, and I actually took a photo of the one I liked the most and will use it as my Twitter picture.”

In addition to the pool and art walk, Lynch has installed a huge turntable for ‘Turn This Beat Around,’ wherein a pop song is played backwards and after it’s been identified contestants leap into the center of it and hit a buzzer.  There’s also ‘Hold My Balls,’ ‘Celebrity Name Game’ and ‘Chest of Drawers’ and believe me, after experiencing these games in person they are much harder than they appear on TV. 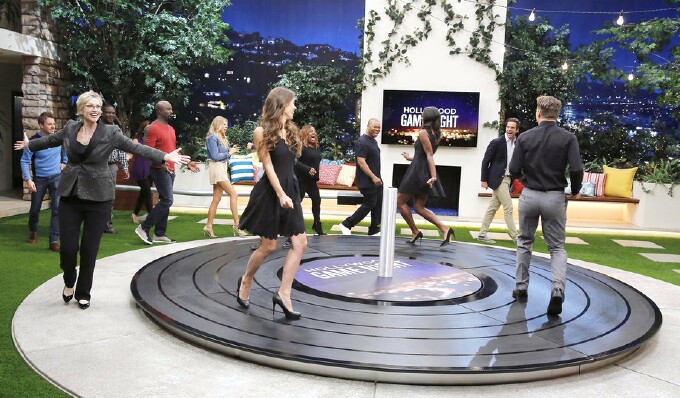 So how does Lynch think she’d fair as a player?

“I’m as good and as bad as everyone else with these games,” she revealed. While her hosting duties prevent her from participating, Lynch said she’s open to it.  “It would be fun and I wouldn’t mind.  It’ll happen someday.  I’d love to be on a game and maybe have Chris Hardwick host it. That guy is amazing.  He’s sweet, smart, genuinely curious and so great to have on the show.”

With game shows experiencing a primetime resurgence on all the major networks, Lynch is proud to have been a pioneer in reinvigorating the genre. She thanks her TV family for making the show the success it is.

“I love the band here and even the valets,” she mused.  “We have all been together now for five seasons.  Everyone on the show crew-wise is pretty much exactly the same as when we started, which is kind of rare.  With this show we never know if we’re coming back.  We don't have a slot on the network so we are kind of like Special Forces and sent in when we are needed.”

“We do feel our advantage is being the first and having a variety of games that are original,” executive producer Michael Agbabian told me.  “Also, Jane is an amazing host and personality, so a lot of celebrities will do the show because of her.  She’s won two Emmys for this.  So we do get people that don’t do the other shows because of our pedigree.”

While all involved are happily riding the current wave of game show success, Agbabian revealed there is a downside. “It’s both a blessing and a curse,” he said.  “There are a lot of competition shows now and only so many celebrities willing to play these games.  We learned early on whom we should get on the show, but so have our competitors.  Between Match Game, Celebrity Family Feud, Pyramid and Lip Sync Battle we are all competing for the same people.

“The idea of adding the backyard really opened things,” he added.  “All the games played out there could never be done in the living room, as it’s not big enough.  It really allows our celebrities to have more fun.”

The new season will see a slight departure from its themed cast nights and the producers are thrilled with the roster of talent that signed on.  “The stars aligned this season with our guests,” Agbabian raved.  “We have stars from This Is Us, Superstore, The Walking Dead, Veep and Orange Is the New Black, so it worked out crazy good.”