Jane Lynch: The "Glee" and "Hollywood Game Night" Star Is Also a Friend of "Friends" 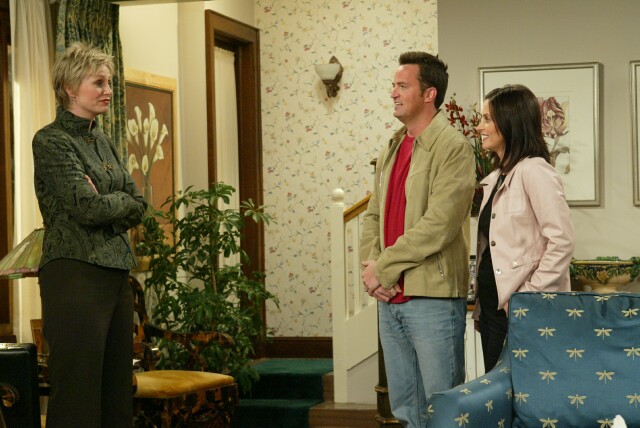 Long before she was terrorizing the students of William McKinley High School in Lima, Ohio, as coach Sue Sylvester on Glee, actor Jane Lynch (above left) was doing the rounds of guest appearances on the likes of Frasier, Caroline in the City, Popular, King of Queens and of course Friends.  It was season 10, episode 15, (The One Where Estelle Dies) that Lynch became a Friend of Friends playing realtor Ellen, who shows Monica (Courteney Cox) and Chandler (Matthew Perry) the house next door to the one they are purchasing (just to compare) in Westchester, only to find Chandler’s on-again-off-again ex, Janice (Maggie Wheeler), is also looking at the place.  While she’s no doubt a friend of Friends (after all she did save Chandler’s sanity by revealing Janice could be a possible neighbor), Lynch has mixed feelings about her appearance on the show.  “Not exactly one of my favorite jobs,” she laughed when I asked her about the role.  “I [only] had about two lines!  But what's great about it was, it was their last year, so that was pretty exciting.”

Lynch had little to say about her brief, yet memorable appearance on the show.  The audition, however, is another story.  “I do remember auditioning for it,” she said.  “I remember we were all sitting in a room and the creators needed to cast it.  Marta Kaufman needed to cast it quickly, and she chose me in front of everybody else.

“She said, ‘Sorry guys, it's Jane,’” she continued.  “She grabbed me, and we all said, ‘bye’.  She took me down across the street, they put me in wardrobe and got me dressed, then I basically went on stage.”

These days Lynch is living it up in her own Hollywood Hills home as the host of Hollywood Game Night on NBC and admits to finding it hard to believe that 15 years have passed since she filmed her Friends gig.  And despite having few lines, and all the great roles and opportunities that have come along since, Lynch enjoys her ongoing friends of Friends status.  “Yes, I'm very lucky,” she shared.