Jane Seymour on the Return of "Kominsky Method" and the Reboot of "Dr. Quinn"

By Steve Gidlow October 30, 2019 Behind the Scenes in Hollywood Archives 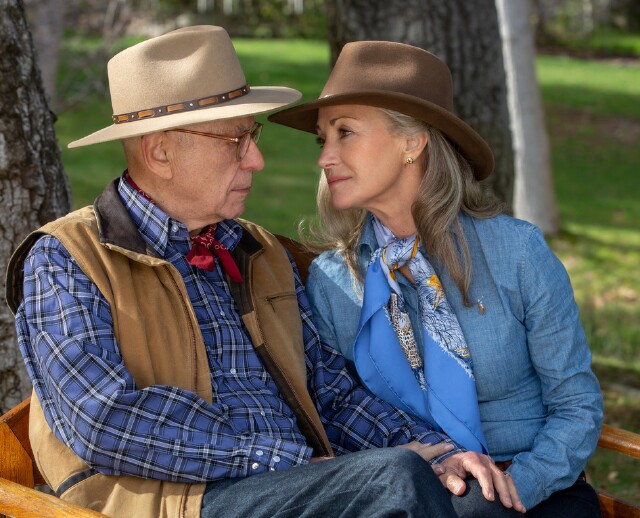 With over 50 years in the business, Jane Seymour remains a perennial Hollywood fixture.  While the ever-youthful actor usually plays younger, she’s finally getting to embrace her 68 years, courtesy of a guest-starring role in season two of Netflix’s acclaimed series The Kominsky Method, and at the invitation of its creator Chuck Lorre.  For Seymour, the opportunity afforded so many firsts, right down to Lorre’s creative method, that she had to do it.  “Chuck tends to write one episode at a time and see how the story develops,” she explained during an exclusive interview with MediaVillage.  “When we met there was no character and no script.  I spent about an hour with him, and that's when he decided he wanted me to play Madelyn, an old flame of Alan Arkin’s character.  (Arkin and Seymour are pictured at top.)

“It would have been nice to have a bible,” she added.  “I usually like to work that way, but Chuck doesn't, and I think he's doing just fine so he shouldn't stop what he's doing.  It's exciting when everyone gets the next script and you go, ‘That's what's happening?’  It's a little bit like life; you never know where you going to be from one moment to the next and you can't plan the future.”

In season two of the series, Arkin’s Norman Newlander character encounters Madelyn (Seymour), whom he dated some 50 years ago, at a funeral they both attend.  With both characters having lost their companions, old sparks are reignited.  Seymour found the idea of revisited love interesting, along with getting to play closer to her age for the first time.  “I think once you've loved someone, even if it doesn't last forever the good part that was there initially is still there,” she reflected.  “You may not like the person, or be suited to be together, but often having that kind of intense experience with someone, no one can take away those feelings and memories.

“I'm hoping people embrace my new look with the gray hair,” she added.  “It's very different for me, and exciting because people often say, ‘You can't play your own age.’ Well, now I can, plus a few years!”

Looking at Seymour’s extensive career, one that runs the gamut of genres from sci-fi to westerns to comedy, you might assume she was blessed with an astute intuition for picking projects.  She doesn’t see it that way.  “Hopefully, it's something to do with being able to do the job,” she admitted.  “And being incredibly fortunate.  I’ve been everything from the ingénue to the romantic lead to the victim to evil.  I've always been a character actress, but after doing [the 2005 feature film] Wedding Crashers everything turned.  Of late I've been doing a lot of comedy.  Always playing the leading lady was great, but it's more fun to play everything.”

Seymour tells me when she's often recognized for many of her previous roles, including the CBS classic Dr. Quinn, Medicine Woman, as well as the miniseries East of Eden(1981), The Scarlet Pimpernel(1982) and War and Remembrance (1988).  “After doing so many miniseries’ I was dubbed ‘The Queen of the Miniseries’ for a while,” she laughed. “But I think I killed that off, and not in a good way, when I did the 32-hour version of Remembrance.  But if you look at what's happening with streaming services now, they are all basically miniseries, so I'm back!” 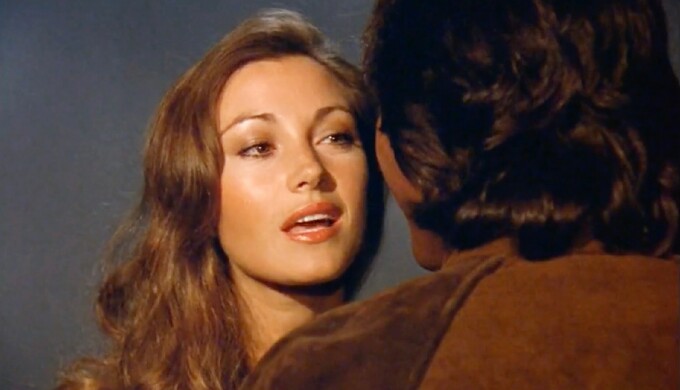 There was one role even she didn’t realize had left an impact, that of Serina (above), the ill-fated bride of Captain Apollo (Richard Hatch) in the original 1978 Battlestar Galactica series.  “I was in the two-hour pilot, but my character died,” she recalled.  “Filming it I played the arc of a woman who was dying of galactic cancer and leaving behind her son.  To my surprise, [series creator] Glen A. Larson invited me to lunch and explained how they had re-edited the whole thing to make it that I was very much alive.  He told me I tested very high and wanted to make me a series regular.  I wasn't sure if I even wanted to do a series, and he replied, ‘You must!  You are still alive!’

“He persuaded me to do a few more episodes and in those they put in everything I would've done in two years -- a wedding, I got to fly a Viper -- but I told him I had to die,” she continued.  “People would approach me at the grocery store and say, ‘We know you are deep-frozen and will be back.’  I had a long chat with Richard Hatch before he passed away and he said, ‘You have no idea the impact that little thing you did on Battlestar had and how much people love it.’  He told me I didn't understand, and I really didn't.  I have huge respect for that series.”

Thanks to her grandchildren, she recently revisited her Bond-girl days via Live and Let Die(1973).  “They’re obsessed with it and always ask if they can watch me in the Bond film,” she laughed.

Seymour is looking forward to sharing with them the 170 hours of Dr. Quinn, Medicine Woman(93-98) she filmed in the ‘90s, and if all goes according to plan some new episodes, as well.  “[A new] Dr. Quinn is something we're actively trying to do, but there are issues with the rights,” she explained.  “We have some great ideas and Joe Lando and I are really excited about it.  It would be 20-something years later, with a younger demographic and a whole new series.”

This month saw the release of High Strung Free Dance (a movie she appeared in and produced).  Next up on the film front is the release of Friendsgiving (2020), in which she plays Malin Akerman’s crazy, Swedish, cougar mother.  “I really think I've just begun,” she said in closing.  “I'm in my prime in terms of my acting ability, and I love working.  I'm also trying to save the planet with my kids and traveling the world for that.  The schedule is crazy, but I love being able to share these experiences as I'm so proud of them.”

Season 2 of The Kominsky Method is currently streaming on Netflix.