Jeep Is All-In When It Comes to "Jurassic World: Dominion" 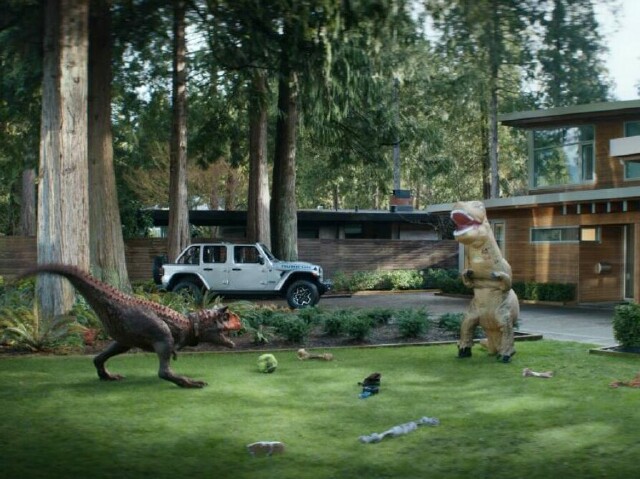 Jeep's marketing campaign for the new Wrangler 4xe plug-in hybrid is wrapped around the new film Jurassic World: Dominion (in theaters today), so you have two quintessentially American brands joining together. You may recall that in a 2018 commercial we had star Jeff Goldblum daydreaming about dinosaur pursuit in a Jeep dealership, tied to the release of the third Jurassic movie. Now, it's a regular guy who discovers a baby Carnotaurus and drives it around -- as it gets exponentially bigger -- in his Wrangler 4xe. Neat touches include an insect-in-amber shift knob, and a believable hatching moment. The campaign, launched on National Dinosaur Day, will run globally, with heavy social media action on Instagram and TikTok.

It's interesting to note that Jeep's all-American efforts are headed by two French men, CEO Christian Meunier and CMO Olivier Francois. That reflects Stellantis' European ownership, but there are no plans to dramatically change Jeep's direction -- though electrification is quite the curve ball.

Automotive product placement has a long history. Everybody remembers the Volvo 1800 from The Saint. Volvo said yes to the production company, after Jaguar said no. And there are few vehicles more iconic than the Aston Martin with the machine guns and ejector seat from the James Bond movies. Aston might not have survived without that tie-in. Back to the Future would have boosted DeLorean sales -- if the company hadn't already gone belly up. (Now the DeLorean is coming back, first in an edition of 88 track-only electric cars. If you recall, 88 mph was the escape velocity for the flux capacitor-equipped DeLorean in the movies.)

The Jeeps in Jurassic Park have been a good tie-in for the brand through six films, especially since they usually outrun the dinosaurs. Jeep provided the vehicles free for Jurassic World: Dominion, Francois said. The very realistic dinos in the ad wouldn't have happened without a collaboration between Stellantis, Universal, Industrial Light and Magic, and Amblin. The production company is Reverie Content, and the director, Mimi Cave.

"One lasting impression is worth more than a million fleeting impressions," said Francois. "The collaboration works because Jeep is all about adventure and freedom -- it's at the core of our brand. And the placement delivers an incredible level of impressions and engagement." The tie-in extended to Jurassic World Dominion screenings for Jeep Wave owner loyalty program members at drive-ins in six cities across the U.S.

Meunier said that Jeep is a global brand, and that teams are promoting the Wrangler and Grand Cherokee 4xes worldwide. A Cherokee is briefly seen in the ad, and to help his baby dino sleep, the owner shifts into all-electric mode on his Wrangler. The Wrangler in the ad is not actually a 4xe, because the model wasn't out yet during shooting. But nobody will know.

In the U.S., Meunier said that the Wrangler is selling ahead of 30 other plug-in hybrids a year after launch. "4xe is the new 4X4," he said. "We are in full momentum on electrification. By the end of the year, we will be selling only electrified cars in Europe. It's not moving as fast in the U.S."

Graeme Puttock of Industrial Light in Magic said the dino in the commercial was under construction even before the script of the movie was done. "It had to be cute," he said. "Everyone loved the baby."

Jurassic World: Dominion has received some negative reviews (the Toronto Star referred to "witless bombast"; the Boston Globe said it was "fairly tired"), and that's one thing that marketing campaigns can't control. Other films the Stellantis companies (there are 14 brands) have worked with include franchises Star Wars, Fast and Furious and Batman.