Jeep's Marketing Manager: It's the Real SUVs Versus the Pretenders 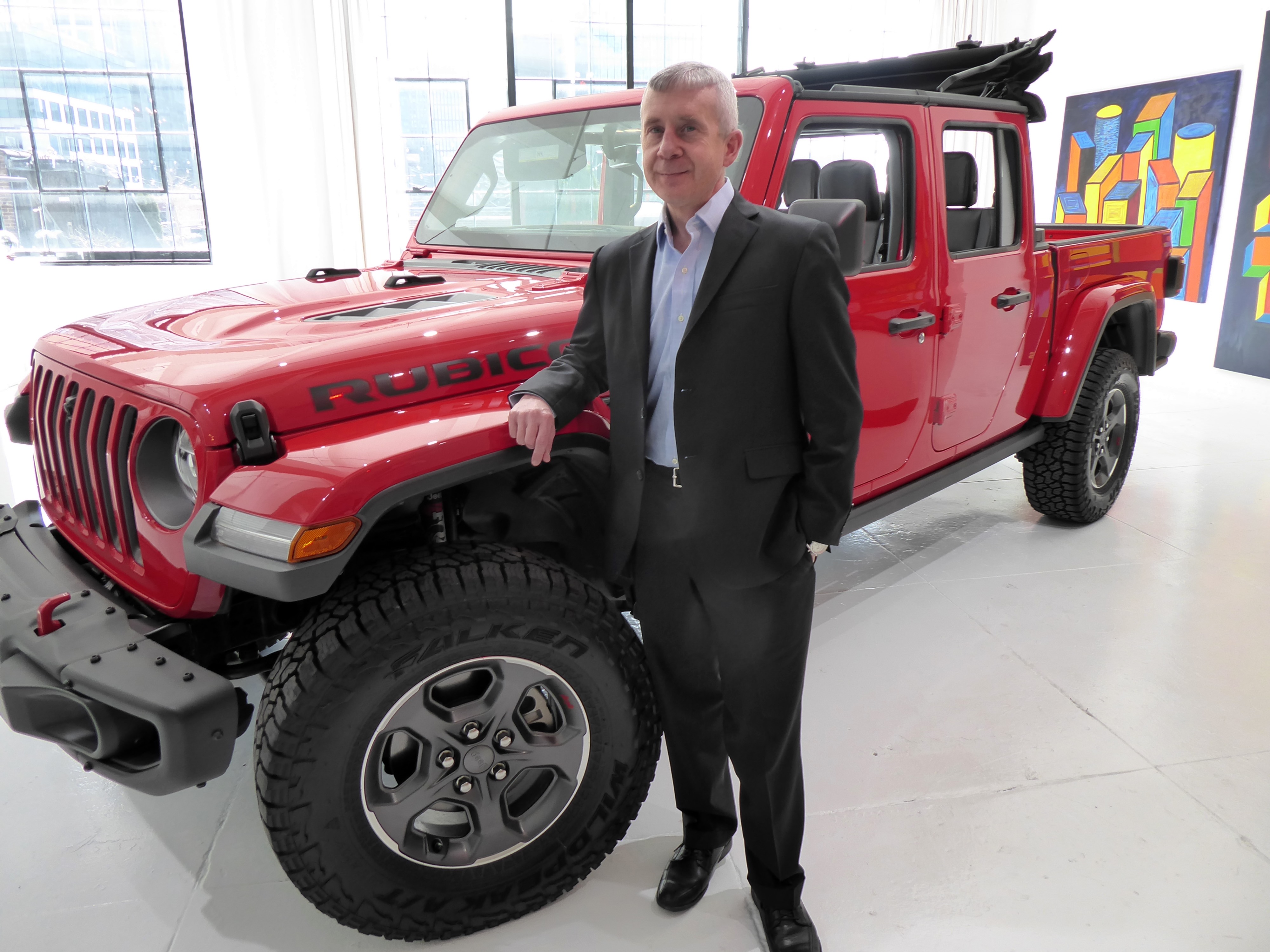 What a year Jeep had!  For a brand that happened to be on board when Fiat bought the bankrupt Chrysler in 2009, it was revelatory.  Back then, Chrysler's sales had plunged 46.3 percent and the company had just 10 percent of the American auto market (down from 15 percent a few years earlier).  Chrysler was fifth in U.S. sales, behind General Motors, Ford, Toyota and Honda.  Most people were grateful that someone was rescuing an iconic brand from oblivion -- but few thought that Fiat CEO Sergio Marchionne (who died last year) had made a smart move.

Look at 'em now.  Jeep sales in 2018 were up 17 percent, and nearly a million units were sold.  The company's new pickup truck, the Gladiator, hits dealerships in May and June, and will undoubtedly make 2019 a better year for the company.  So, the job of Scott Tallon (pictured above), Head of Jeep Product Marketing for the past three years, would seem to consist of taking victory laps.  But when I sat down with him in New York (at the Gladiator press event) he said that is not the case.

The primacy of SUVs has changed everything, but Tallon points out that "other brands are pouring into the marketplace."  Every automaker is selling SUVs, even supercar manufacturers that, until recently, laughed at them, and Tallon counts 24 new nameplates that have gone on sale in less than three years.  "It's very crowded," he said.  "So, how do we differentiate Jeep from the herd?"

Jeep has concluded that its history as the original 4X4 gives it bragging rights, and its continued dedication to SUVs that actually can go off the road is something to celebrate.  Hence, "SUV Letters Earned," Jeep's new television spot.  Tallon showed it to me on his smartphone.

"S-U-V, these letters used to mean something," the ad says, as a Jeep bursts through the letters on screen, followed by brief, almost subliminal footage of the World War II vehicle parachuting into the battle and off-road imagery of people (all ecstatically happy) and Jeeps splashing through streams, across deserts and up mountains.  "Somewhere along the way," the script continues, "SUVs became pretenders, not pioneers."  The visual shifts to a toy SUV.  "But you never forgot the difference, and neither did we.  There are many SUVs, but there is only one legend."

Tallon said that as buyers went for car-based and smaller crossovers, the SUV name started to have bad connotations -- that the vehicle would be big, heavy and Spartan.  "We want people to know that we're best-in-class in every area we compete, and that our vehicles are all-weather, all-terrain and very functional," he noted.

The Gladiator Rubicon on stage had a big "Trail Rated" decal, and Tallon said that Jeep takes the designation seriously.  "It means your vehicle can make it through snow, sand and around a downed tree," he explained.  "It's a true 4X4 and a clear delineation."

"Trail Rated" is not via a third party, but an internal designation.  Tallon was quick to point out, however, that the power to award the title is owned by engineering, and not marketing.  "Not every Jeep gets to be Trail Rated," he said, though all the Wranglers wear the badge.  "Trailhawk" is related, but that's a trim level that indicates the vehicle in question is fully equipped to go off-road, with features such as tow hooks, special wheels and all-terrain tires.

Tallon likes both broadcast and cable TV, and said the former is best for "going big" and the latter for strategic targeting.  He said the trick is getting the balance right with advertising on them.  He doesn't much like radio.  "It's a tough medium," he asserted.  "The Jeep has an emotional appeal, and people need to see it."  Radio sometimes works in the summer, he added, when people take their boom boxes to the beach, or when storm alerts go up -- having a 4X4 can make people feel more secure.

Digital?  "It's seemingly infinite," Tallon said, and that means finding the right place for advertising can be difficult.  "It's hard to cut through the clutter.  There's no question it can be a great way to reach consumers, especially in the Millennial generation."  Tallon is also a big believer in maximizing the company's presence on social media.

What about traditional advertising venues, such as magazines, including Car and Driver, Road and Track and Motor Trend?  "They're still hugely relevant," Tallon said.  "The buff books have enthusiastic audiences, and they're advocates for the brand."  But, in practice, that means the auto brands are very glad to cooperate in arranging cars for test drives and cover stories but are less likely to take out double-truck ads, at least as much as they used to do.  The biggest advertiser in car magazines today is WeatherTech, the floor mat people.

The average Jeep owner is 53, which isn't great if you have those Millennials in your sights.  The image of the keg-toting college student may be true for Wrangler, but Grand Cherokee buyers are older.  "Our average is in line with the industry," Tallon said.  "Buyers of the Renegade [a small crossover starting at $22,025] are very young, and 80 percent of them are new to the brand.  We've been able to double our number of Millennial buyers.  If we can get them when they're young, they'll go on to vehicles like the Grand Cherokee later."

So, there are still new markets to conquer, and Jeep can't rest on its record sales.