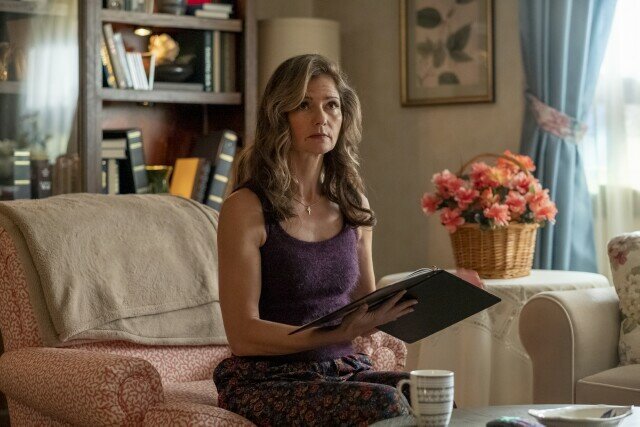 In Showtime's City on a Hill, a gritty drama set in early 1990s Boston, Jill Hennessy takes on one of America's often attempted and rarely perfected accents: Boston working class. Not surprisingly, she aces it. Her distinct way of speaking as Jenny Rohr is not what she picked up merely by hanging out with Red Sox fans. Rather, it's the result of the Ontario native and longtime New Yorker studying those flat vowels and dropped suffixes.

"For some bizarre and wonderfully fortunate reason, I keep getting parts based in Boston and get to travel there and do research and shoot there," Hennessy (pictured at top) told MediaVillage during an exclusive interview. "[With] this one I may have traveled on a different path for what (series creator) Chuck MacLean had thought of. This character of Kevin Bacon's wife Jenny was just one scene in the pilot. They weren't sure where she was going to go.

"He loosely based her on his own mother," she continued. "I knew she was Italian and from Boston, so I just chose the North End. I was going on YouTube and doing deep dives, and I am looking for material from the mid-'80s to the mid-'90s; real people -- not from the movies, from news footage."

Her character carries a tremendous amount of emotional trauma. Jenny's father had raped her; her mother did not believe her. She's married to Jackie Rohr, who can kindly be described as arogue FBI agent. He had killed their daughter's former boyfriend, the one who got her hooked on drugs. During this eight-episode season, the daughter works on her sobriety. All of this adds up to nothing in Jenny's life being easy. 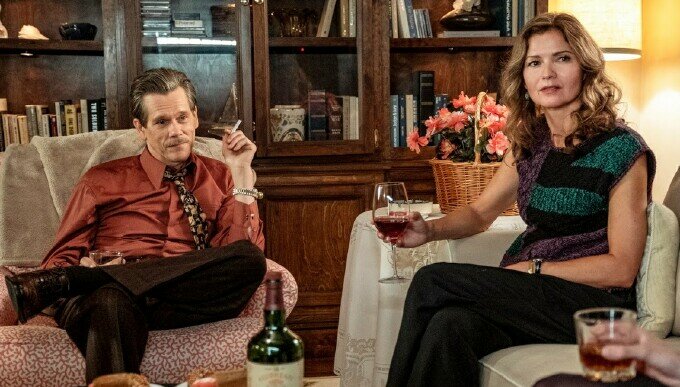 "I desperately love Jenny," Hennessy said. "I think there are many people like her, both male and female, who, through a very dysfunctional childhood and bad parenting, think that every bad thing that happens to them is their fault, and they deserve it. And they wind up punching themselves for many years."

Hennessy shows her range with gut-wrenching scenes when she confronts her mother or all but throttles her husband, whom she's still attracted to, regardless that he can be a dog. Despite the 27-year-old game of Six Degrees of Kevin Bacon (above, left), City on a Hill marks the first time they worked together.

"I had met him a few times," Hennessy said. "And I am obviously a huge fan. I became one degree three years ago, and we have shared a lot of crazy moments as actors."

In its sophomore season, Jenny "is revisiting her own childhood," Hennessy explained. "Her father had raped her, and her mother didn't want to hear about it and didn't believe her and made her feel like it was her fault. Now she is realizing she doesn't have to blame herself and maybe put up with her husband's bullshit. And it is a mixed bag, that marriage. In a way, she is saying: 'Do I want him here? Do I not want him here?' There are tiny pieces of Jackie she does love and a whole bunch she despises. She knows he is a misogynist and a racist and there's not a lot of fidelity there, and then it's, 'Screw it. The guy is living in my house.'"

As Jenny, we've seen Hennessy vulnerable, but there's a fierceness that surfaces when pushed, such as when she clocks a man who attacks her friend in the Sunday, May 2 episode.

Hennessy has long radiated a confident, low-key competence on air. She broke through as Claire Kincaid on Law & Order. During those years, she learned from veterans Steven Hill, Jerry Orbach and Sam Waterston. Hennessy also played a Boston character as the medical examiner

Dr. Jordan Cavanaugh on Crossing Jordan. Since her 1988 debut in Dead Ringers, playing a twin with her twin, Jacqueline (yes, their sister act was Jack and Jill), Hennessy has worked constantly as an actor.

Her start, though, was as a busker in Toronto and New York.

"The subways have the best acoustics," Hennessy said. "But you have to choose your moments. As soon as the train comes barreling down the track, you have to pause. I used to busk in Central Park, and you can usually get the tourists to sing."

She continues to write songs. Before the pandemic, Hennessy was performing at a benefit in Asbury Park when the town's most famous son took the stage after her.

"I had just played 'No Surrender' by Springsteen, and my husband and I felt someone pushing their way to the stage," she recalled as The Boss brushed past. "I didn't even get close to him. It was just a joy! I was on Cloud 9 because I was on stage with Bruce Springsteen! It was a killer night and a great cause, a foundation that helps research with degenerative diseases. It was a party, one of those moments where you say, 'I wish I could bottle up this moment of pure joy and that it would never end.'"

Like everyone, Hennessy can't wait for life to regain normalcy. She's been home in Manhattan with her two teenage sons and husband and had a great year with family. Hennessy is also grateful that she could film the series in a COVID-safe environment this season with parts of City Island, Staten Island, Yonkers and The Bronx filling in for Boston of 30 years ago.

As of deadline, it was not yet announced if there would be a third season. In the meantime, she's anxious to sing in front of live audiences.

"I am just dying to get out and sing again," Hennessy said a little wistfully. "I miss singing at City Winery and going through New Jersey. I want to go to California, to Arizona, to Michigan."

City on a Hill is telecast Sundays at 9 p.m. on Showtime.