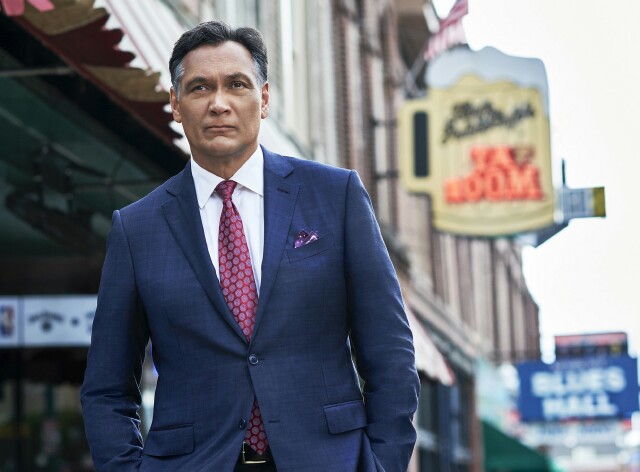 Memphis, TN -- One of Hollywood’s tropes is the city where a show occurs is a character. Every so often, especially when production lays down stakes in a new town, this turns out to be true.  To use the most obvious example, it’s hard to imagine Sex and the City taking place anywhere but New York.  It’s much the same withBluff City Law premiering Monday, Sept. 23, in prime NBC real estate, following The Voice.

The legal drama unfolds in Memphis, and viewers can all but feel the oppressive heat that bakes Beale Street where live music wafts from bars.  It’s the home of Elvis’ Graceland, and this Mississippi River town hosts the Lorraine Hotel, where the Rev. Dr. Martin Luther King, Jr., was assassinated.  An excellent museum devoted to civil rights now fills the hotel.  NBC invited MediaVillage to Memphis to get a feel for its most promising new show.  How could it be anything less when it stars Jimmy Smits?

During a series of round tables at Itta Bena, a restaurant up the fire escape from B.B. King's club, Smits granted me his only exclusive interview.  He chatted about growing up around New York City, being influenced by Raúl Juliá and James Earl Jones, and his return to headlining a network series -- his first since the writers’ strike of 2007 jettisoned the excellent Cane.

“The best experiences I have had have been in ensembles, without a doubt,” Smits said.  “I kind of like the way the Bluff City pilot positioned itself with the ensemble.  (Smits, center, is pictured below with the Bluff City cast.)  It reminded me a little bit of that L.A. Lawscript I read way back when.  What the guys were talking with the law, the good and the bad of what society can be -- especially with all the noise going on now -- it’s a good thing to shine the light on the aspirational things this can offer.  It’s important that it can be aspirational without being preachy.” 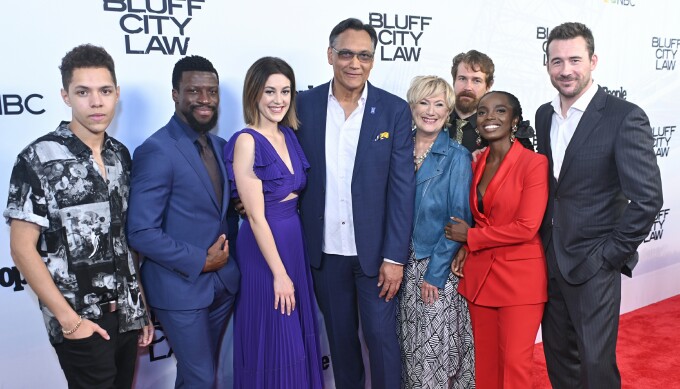 His character, Elijah Strait, is a complicated man; a widower and crusading attorney who fights for the little guy.  He’s definitely not a caricature of the Southern gentleman lawyer.  “When he was married, they were very entrenched in the community and social activism,” Smits said of Strait.  “He was at the top of his game.  It’s a small firm.”  Into said firm bursts his estranged daughter, Sydney, played by Caitlin McGee.  She’s a tough corporate lawyer who disdains her father personally but respects him professionally.

Smits appreciates working with theater veterans, of which there are many in the Bluff City cast, including Michael Luwoye, who plays a lawyer, and had portrayed both Burr and Hamilton in Hamilton.  Luwoye was impressed by Smits’ dedication to ensuring the cast’s cohesiveness.  “I love that somebody saturated in this industry for a very long time respects his fellow actors,” Luwoye told me.  “He does not have to care -- but he cares as if it’s his first day.  If I am ever fortunate enough to have that tenure, he is someone I would hope to emulate.”

Picking Smits to lead the procedural was a no-brainer.  “He’s a legend,” said executive producer David Janollari.  “He is an iconic talent, a star.  We needed someone who could command that authority, that intelligence.”  Janollari explained that he and fellow executive producers Dean Georgaris and Michael Aguilar "set out to put something on the air that didn't look and feel like everything else on television.  Memphis sounded like a place steeped in history, blues and rock ‘n' roll.  I fell in love with people.”

In turn, Memphis has embraced the series.

"People are aware of it, and there's a gratitude about showing the city," Smits said.

Gratitude is a constant with Smits.  He co-founded the National Hispanic Foundation for the Arts, and when one of the Bluff City Law writers introduced herself as a scholarship recipient from it, he beamed.  “That was amazing,” he said.

One of the reasons the cast gelled is that they had time to rehearse and explore.  Like many southern cities, Memphis takes its barbecue seriously.  Luwoye laughed as he recounted that the second episode required his character to eat ribs.  There was a spit bucket, but “they were really good ribs.  I had 18!”

“After 10 minutes, someone asks you what barbecue places you have been to, to establish your cred,” Smits noted.

For actors whose creds are long-established, this has the feel of a show that can go the distance.

“This is a hit,” co-star Jayne Atkinson, fresh off Netflix’s House of Cards, predicted.  “I have been around long enough to know.  Look at me – I have only been on hit shows.  I am 60, and I know.”  She’s also a veteran of Madame Secretaryand Criminal Minds, among many others.

Andy Wolk, who directed the pilot and taught acting at Brooklyn College when Smits was a student playing Prospero in The Tempest, said, "Jimmy conveys an incredible warmth.  He has steel, but warmth, and that comes through.

“This show is about someone who wants to do the right thing in terms of social justice,” Wolk continued.  “It’s a great meld.  Where you really appreciate Jimmy’s acting is when he’s not playing a New Yorker.  As a character he’s created, this ain’t a guy from Brooklyn.”

Bluff City Law will be telecast Mondays at 10 p.m. on NBC.