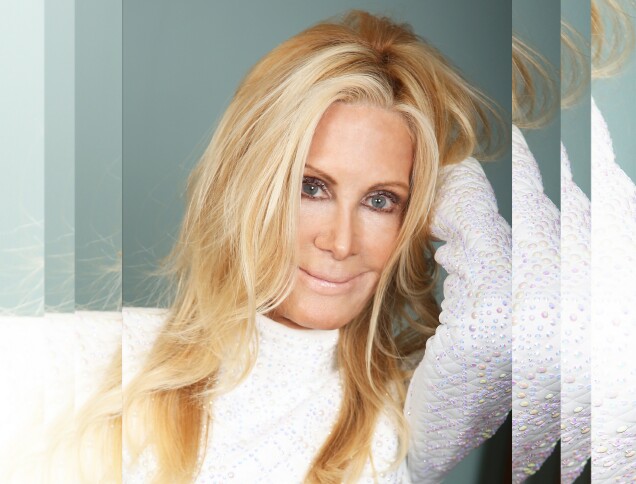 During her illustrious five-decade career, Joan Van Ark has worn many masks for her craft – but she has never looked the way she does as wedding dress designer Aunt Daisy in Lifetime’s Psycho Wedding Crasher (premiering Sunday).  Hidden under a short, dark-bobbed wig, Van Ark is virtually unrecognizable and downright devilish, devouring the screen in a performance that can only be described as “the aunt from hell.”  The 74-year-old star, who is best known for her long-running portrayal of Valene Ewing on the classic primetime soap operas Dallas and Knots Landing, as well as a sequel miniseries of the latter and the TNT reboot of the former, relished her latest role, given it was such a drastic departure from anything she had ever portrayed before.  “It was hard,” she recently told me during our exclusive interview.  “I want everyone to love me endlessly, 24/7, so to do this and be fair to the project, I had to go balls to the wall and not look back.”

The first step in her transformation was her look.  After toying with a few ideas the movie’s producers decided to go dark.  “It was a good visual and an expression of her hardness,” Van Ark said.  “My thing is go big or go home.  I feel that in anything.

“Daisy is despicable,” she continued.  “When first I read the script I thought she was so one note.  But then, when we started filming I wanted to give [the director] options to show why she is that way.  She’s lonely, she loved her [deceased] brother who was also the only man in her life, so I had to motivate all of that and it was embarrassing.” 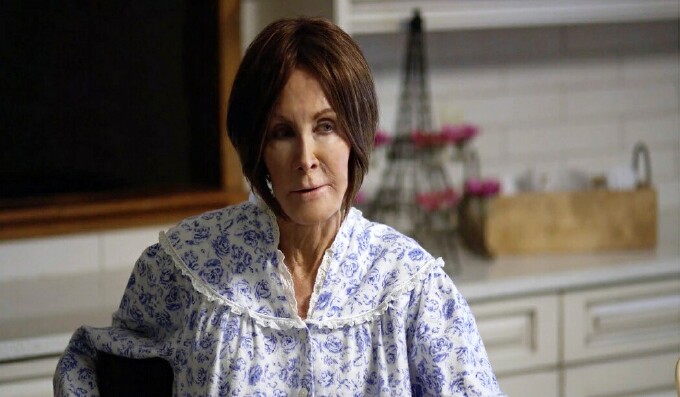 Starring opposite Van Ark is Heather Morris as Daisy’s niece Jenna, a seamstress with a loose thread completely frustrated by her own loneliness. After crashing her aunt’s last client’s wedding, Jenna manages to infiltrate the couple’s lives before ruining them.  For Morris, the role is a major departure from the delightfully dim and sweet Britney S. Pierce on Glee and one Van Ark is sure viewers will enjoy.

“Heather is strong and what she delivers in the movie is a tribute to her skills,” Van Ark said.  “She executes vulnerability and then becomes anything but that. She shows several sides to her talents and when you have been a part of a series, as I was for many years with Dallas and Knots Landing, and as Heather was with Glee, going somewhere that violates your brand is brave.”

Van Ark told me it was Morris’ endless encouragement that resulted in her completely over-the-top portrayal of Aunt Daisy.  Together, they created an on-screen dynamic reminiscent of the mother/daughter pairing of Piper Laurie and Sissy Spacek in the horror classic Carrie.  “I had trouble during our first scene, getting my engine going to be on the attack like a Doberman,” she revealed.  “Heather kept telling me to put my big girl pants on and she really helped.  She is a tough cookie -- in the best possible way.”

She explained that while playing a woman so filled with bitterness she needed to find at least one redeeming quality to the character.  “I did love that there is a deep artistry to this woman,” she said.  “Daisy designs these beautiful wedding gowns, that Heather’s character sews, yet they come from a dark place.  A wedding is something Daisy will never ever know first hand and all Jenna wants is a wedding -- and she will have one, or else! There’s a wink, wink, element to the story and that also makes it delicious.”

When asked about it, Van Ark balked at the subject of celebrating five decades in showbiz.  "I've blocked out my early work,” she laughed.  However, while recently perusing her resume she admitted to being pleasantly surprised.  “I thought, wow I have done a lot of things I am proud of,” she said.  “The Tony nomination for my work on Broadway and all the theater work; there are things that are important to me and theater is at the center of my soul.”

With the 25th anniversary of the Knots series finale fast approaching, Van Ark shared there is talk of gathering its stars together for a special in which they reflect on the show.  And there is something else in the works with her Knots co-stars Donna Mills and Michelle Lee.  “Donna, Michelle and I are kind of talking to producers about trying to put together something fun, but with a purpose,” she revealed.  “Nothing scripted; more something of us together as girlfriends, because we still are and regularly get together.  I love to say “we’re forever tied in knots” along with [co-star] Ted [Shackelford], whom I also get together with every few weeks.

“I’d love to do something unexpected,” she mused.  “An RV trip in a camper would be hysterical and show us as girlfriends.  I like to call us earth, wind and fire.  Michelle is earth, I am wind and Donna is fire.  It would be fun.”