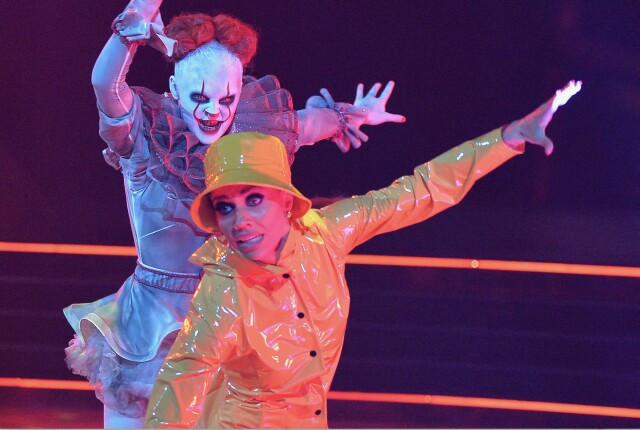 With Halloween just around the corner, ABC's Dancing with the Stars last night paid homage to some of the horror genre's most terrifying moments. While all the remaining contestants in week six of the competition conjured respectable scores, it was JoJo Siwa (pictured at top, left), together with partner Jenna Johnson (top right), who won the night with a spirited jazz routine inspired by the Stephen King book-turned-movie, It -- one that had all four judges singing her praises.

"That was terrifying and absolutely brilliant," beamed judge Bruno Tonioli following the duo's dance. "You are a terrific talent."

"That was scary," echoed head judge Len Goodman. "That dance captured the book."

Carrie Ann Inaba also praised the acrobat-filled routine, declaring, "You pushed yourself, and you nailed it."

Derek Hough simply stated, "Beautifully done," before awarding the couple a 10. The other three judges followed suit, honoring Siwa and Johnson with a total of 40 points.

That was Siwa and Johnson's second consecutive perfect score, making Siwa this season's celebrity frontrunner. However, just because the pop singer is currently riding high, she's not resting on her previous scores. "Oh my gosh, I'm beyond excited, and I'm literally on the moon right now and so happy," she beamed after the show.

"There has been pressure since before we even did 'Are You Gonna Be My Girl' in week one," she added. "We started off with the pressure of being the first two girls [to dance together in the history of the show], and the first same-sex couple, and that was pressure. Every week there's been added [pressure] and now these perfect scores obviously add more pressure for us. Next week we want to get another perfect score, but I think in both of our heads we just want to do our best with whatever style we have. We just want to make that as amazing as possible and if the scores line up to again be 10/10/10/10, it's just a bonus."

Thanks to a perfectly executed Contemporary dance routine inspired by the film A Quiet Place, country singer Jimmie Allen, along with partner Emma Slater, proved why they are still contenders in the competition. After high praise from all four judges for their control and execution of the danced tale of sacrifice, the partners (pictured below) scored the night's second-highest score with 38. The routine brought an onslaught of emotion from Allen. "I just started to think about my family," he explained after dancing. "What I took from A Quiet Place 1 & 2 was a parent sacrificing for their family. So, I started thinking about my wife and my kids. I'm a softy and all the mush started coming out. I kind of felt it during our dress rehearsal, but I held it back and I feel like that stopped me from really getting into the dance. So tonight, I just was like whatever. Whatever happens, happens." 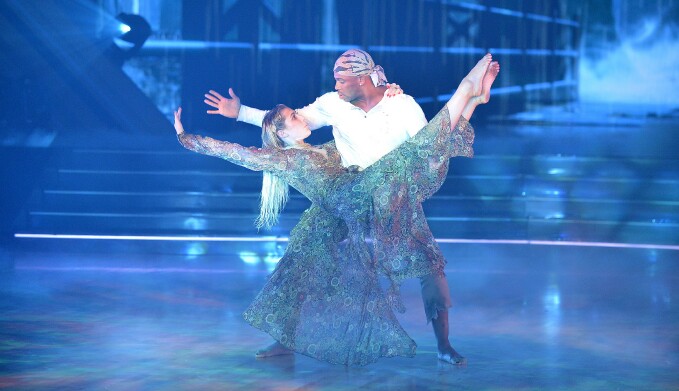 One of the night's highlights came from Iman Shumpert and Daniella Karagach (pictured below), whose acrobatics-filled Contemporary routine, inspired by the movie Us, slayed all four judges and saw the two awarded the night's second perfect score. 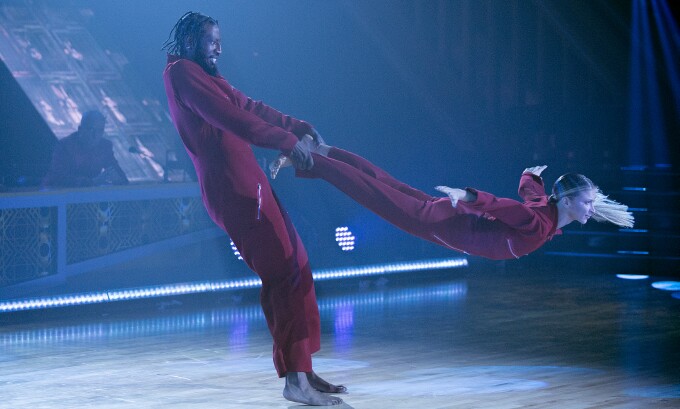 It wasn't until performance night that they felt they had something special. "This was a fun week for us," shared Shumpert post-show. "The song, the movie inspiration, everything about it was fun, and we could really get into character, so that was exciting enough to take us through the week. I don't think we had it until [tonight], though. But finishing tonight, it felt great to get a 10 from Len!" 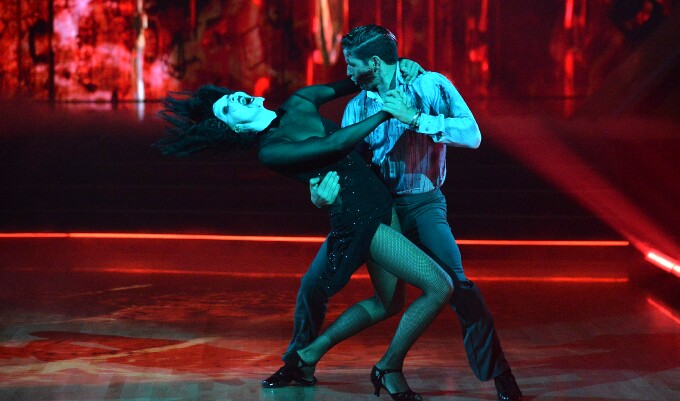 Rounding out the night, Amanda Kloots and Alan Bersten (pictured above) also received a respectable 38 for their Argentine Tango inspired by the movie Saw. Before the dance, Kloots revealed that the routine proved to be a challenge this week, and while the judge's critiques were mixed., the couple did execute some tricky footwork to perfection. "I'm really proud of our dance tonight," Kloots said after the show. "I really am. I don't think I've ever felt as connected to Alan on the dance floor as I did tonight. I love constructive criticism and we will always take it to heart and see how we can be better. Personally, I was so nervous about this dance all week long, and the fact that we went out there tonight and we feel as good as we do right now -- that's all that matters."

Despite being saved by the judges in prior weeks, it was time for Real Housewives of Atlanta'sKenya Moore to retire her dancing shoes after being eliminated from the competition.

Season 30 of ABC's Dancing with the Stars continues next Monday at 8 p.m. with a show devoted to rock icons Queen.