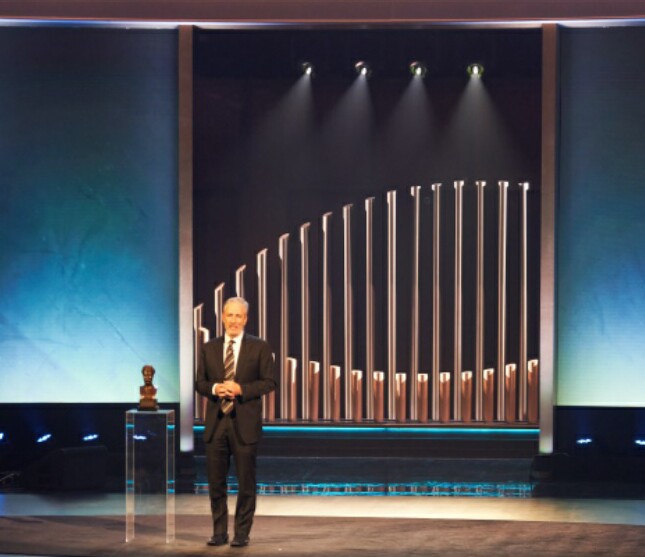 (Editor's Note: This column by our own Roger Catlin, who attended the event, was originally published on April 27. Jon Stewart: The Kennedy Center Mark Twain Prizewill be telecast tonight on PBS. Please check your local listings.) After praise from an array of comics, most of whom he had mentored, and a serenade from a favorite rock star, Jon Stewart took the 23rd annual Mark Twain Award for American Humor at the Kennedy Center Sunday with a mix of humility and a challenge for comedy to continue challenging authority.

Receiving the Twain award, which he called "this man's decapitated visage," is, he said, "a reminder [that] what we have here is fragile -- and precious."

And it was one to be relished, as he did, in a special box alongside his family, heartily laughing at the gibes of his famous friends on stage. The best part of his 35-year career, which continues with his current Apple TV+ show The Problem with Jon Stewart, "is the journey with the greatest possible friends I could ever make."

It made for an interesting crowd. Stewart was preceded on the red carpet by House Speaker Nancy Pelosi and trailed by White House Spokeswoman Jen Psaki and Transportation Secretary Pete Buttigieg.

The evening, taped for a PBS broadcast in June, began with a hard-charging version of the Beatles' "Come Together" with no less than fellow New Jerseyan Bruce Springsteen joining Gary Clark Jr. and his band. Springsteen, a long-time idol of the honoree, would return later to do a solo acoustic reading of his Jersey anthem "Born to Run," calling out to the comedian, "Tramps like us, bro!"

Mostly, it was about comedy, occasional sincere praise for Stewart leveled by the kind of jibes suited for a roast, coming from a remarkable array of stars that have come out of The Daily Show, including Steve Carell, Samantha Bee, Ed Helms and via video, Stephen Colbert and John Oliver.

It was the first Twain Prize given since 2019, when Stewart took part in praising that year's honoree, Dave Chappelle, who was back on hand to salute his pal.

The pandemic had put the event on ice for a couple of years. Stewart was perfect for its return, Kennedy Center board chairman David Rubenstein said, since his humor came with a serious intent well suited for a post-pandemic time with a war breaking out across the globe.

Attendees were masked. (That's an odd thing for the performers, Stewart noted: "You can perform but you can't see their mouths.") And Colbert was there via video only because of his own bout with COVID that caused the abrupt cancellation Thursday of his Late Show (which since moved to planned reruns). Appearing live, the host of Full Frontal with Samantha Bee told the well-dressed audience, "it's an honor being infected with COVID with you."

Bee said Stewart, whom she called "The godfather of righteous outrage," taught her a lot in 12 seasons. "Not enough to host his show," she added wryly, "but enough to host my own show."

As a former winner Chappelle said he knew exactly how Stewart was feeling. "It's like getting a preview to your own funeral," he explained.

Oliver went a step further, insisting on tape that Stewart must be dead, as he would never agree to sit for hours to hear praise.

Carell hilariously recounted an early assignment on The Daily Show involving a venom research facility in Nebraska that turned out to be "a mobile home full of snakes."

Ed Helms dressed in old-time baseball garb to lead the crowd in "Take Me Out to the Ballgame," leading up to showing an embarrassing first pitch Stewart attempted before a Mets game.

Who can even remember the few months Olivia Munn was a Daily Show correspondent? (She was in 16 episodes from 2010 to 2011). Nevertheless, she thanked Stewart for plucking her from a video game network to be a correspondent.

Munn noted that Stewart kept his Emmys in a cardboard box behind the door of his messy office. "I can't wait to see what filthy box you'll dump this award in," she said.

More than one performer noted that Stewart had left his high-profile Daily Show gig just before the Trump era, which Jimmy Kimmel likened to "leaving Woodstock after Sha-Na-Na."

"We missed you very much," Chappelle said.

But his influence worldwide was noted in one of the several clip packages of Stewart's work in the show. Paying homage in person was Bassem Yousssef, a former surgeon in Cairo, Egypt, who was so inspired after seeing Stewart's political satire he attempted a similar show in Egypt. "You don't understand the impact he's had outside the United States," said Youssef, whose own show of political satire was popular briefly during the Arab Spring before he was brought in for questioning and had to leave the country.

Davidson, a fellow New Jerseyan, was the youngest comic on stage, praising Stewart as a highly respectable mentor. "The most controversial thing he's done is become friends with me," he said. And friendship, he added, "isn't something he half-asses, like acting, or gives up easily, like directing."

Meacham alone took a serious take at the comedian and activist, who has been a vigorous voice for veterans and first responders. "Most comics make jokes," he said. "You do more. You make a difference."