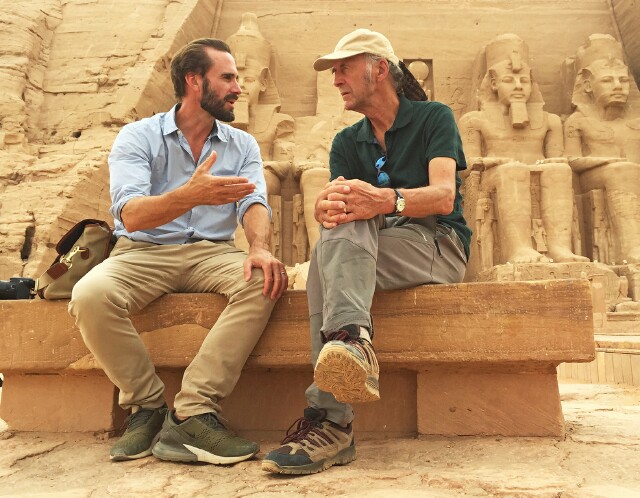 Every family has one member who looms just a tad larger -- the uncle who fought the fascists, the grandmother who marched with Dr. King.  Their stories become the fabric from which family legends are woven.  In actor Joseph Fiennes’ family, his cousin Ran Fiennes’ stories took on mythical proportions, as well they should.  Ran (pictured above and below, opposite Fiennes) is a genuine explorer:  He circumnavigated the globe and discovered a lost city in Oman.  Joseph, seen most recently in Hulu’s The Handmaid’s Tale, wanted an adventure with Sir Ranulph Twisleton-Wykeham-Fiennes, in part to see if any of that derring-do was in his DNA.  The result is a charming three-part travelogue and delightful buddy film – if tunneling through ancient catacombs with a knight can be called such.

National Geographic’sEgypt with the World’s Greatest Explorer, premiering March 14, kicked off with a screening Monday night at the Crosby Street Hotel in Soho. Incidentally, that title is not Hollywood hype.  Guinness Records bestowed the honorific “world’s greatest explorer” on Ran in 1984.  After serving in the British Special Forces for eight years, Ran became the first person to walk across Antarctica.  He has also written 19 books and at 65 summited Mount Everest.

In a brief chat with MediaVillage, Joseph said he learned a lot throughout this production -- primarily about preparedness -- from someone who has walked around the North and South Poles.  “You don’t take risks if you want to do the next job,” he said.

The biggest takeaway he had and the one he hopes viewers will share is the strengthening of family ties.  "I would love someone to watch this and say, ‘I should give my auntie or someone a call,'" Joseph said.  "They may not have done the poles, but you all have a chance to grab someone and learn their history.  For me, it was Ran.” 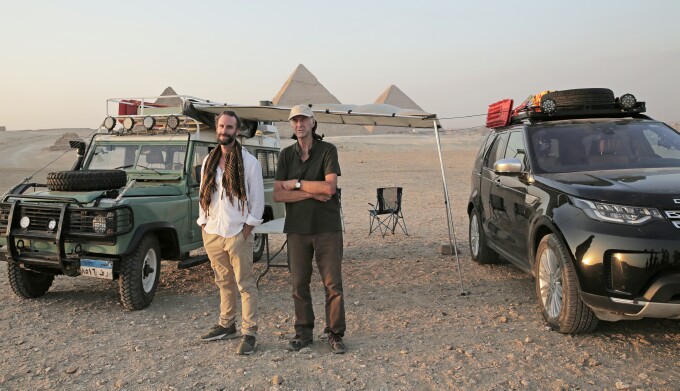 The program kicks off with the duo, the stoic 74-year-old former soldier and the 48-year-old actor, retracing the elder’s original journey through Egypt 50 years ago.  At one point during the first hour Joseph muses, “I wonder what drives Ran to the limit and if I have what it takes to make it in his world?”

Then, Ran had followed the path of the longest river on earth, the Nile, and now the two are repeating that journey in the same sort of vehicle, a Land Rover.  The self-effacing actor gets a driving lesson on maneuvering in sand, and not just a bit of blowback from the beach but in the Sahara Desert, where nothing but dunes are visible.  Joseph had a bit of an issue and got them stuck in the sand.  Ran, as would be expected, remains unflappable.

To illustrate just how coolly impassive this man is, early in the film Ran rattles small brown objects from a container.  These are his fingertips, which he sawed off when he had extreme frostbite.  Yes, this is a man so tough he cut off his own fingers.  It’s understandable if the actor and adventurer have different perspectives on life.

Joseph talks about how stunt doubles always make him look better in films.  His credits include Shakespeare in Love and a stint with the Royal Shakespeare Company.  Early on their journey, Joseph drove 18 miles with the hand brake engaged.  Ran, though, doesn’t scold.  Instead, he gives solid advice, warning him about the sandstorms of Egypt as they travel 1,000 miles, beginning in Alexandria.

They stop in tents along the way where they meet with men, who learned from their fathers, how to milk poisonous snakes for their venom.  It’s a most necessary skill: The Egyptian cobra’s bite takes half an hour to kill someone if the anti-venom isn’t administered.

After trekking through the Sahara, the cousins come upon the town of Minya, where an archaeologist takes them to a recently discovered site.  Climbing some 17 feet down a hole and creeping on their stomachs, their paths illuminated by headlights, they crawl what seems like an awful long way through openings just large enough for a thin man. Though grave robbers have been through, they wind up at an unrifled sarcophagus.  It's a fantastic find.

Joseph, who is also a producer on the series, had last spoken with Ran about 20 years ago.  He was clearly delighted to have had this opportunity.  As hot and uncomfortable as it was in the desert, the most challenging aspect of this documentary series wasn't physical.  Rather, it was delving into a character who came with no script – himself.

“It’s harder in many ways to be yourself than it is to be a character,” he notes.  “This is kind of liberating.”

Admittedly, it was a real challenge.  In the second episode, on March 21, the duo visit the Pyramids of Giza, where Ran arranged a special overnight visit for them.  In the final episode, March 28, Ran takes Joseph to Silsela, where they camp along the Nile and deal with croc-infested waters.  Considering Joseph was chatting about the experience, and Ran was off -- one hopes on another adventure -- we know it turned out fine.