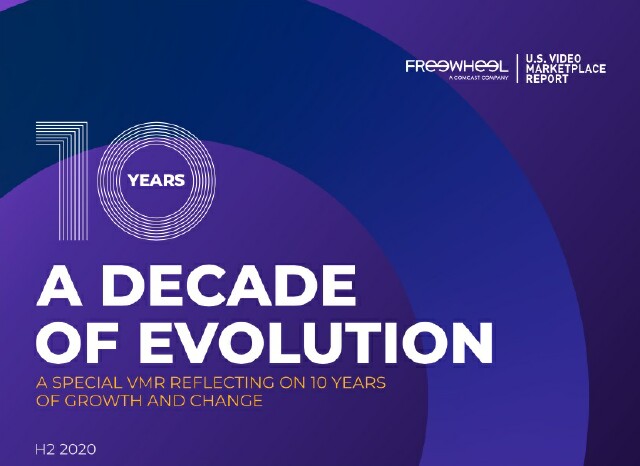 This year marks the 10th anniversary of FreeWheel's Video Marketplace Report, a seminal study on the state and future of premium video. The report is a valuable tracking of the emergence and growing popularity of premium video in the marketplace.

"The report started in 2010," said Julia Zangwill, director of advisory services at FreeWheel, "and we saw the need to highlight the trends in the premium ecosystem." Over time it went from three pages to thirty pages and expanded from just the U.S. market to the EU. The basis of the analysis is derived from the rich data set culled from the FreeWheel platform on premium video. "It's all aggregated and anonymized and it is ad views data as well as video views data," she explained.

Premium video is a term that can be loosely defined nowadays. "It is a bit of a hot potato," Zangwill said. "The way we define it is around professionally produced, mostly long-form video that has monetization rights. Those are MVPDs, distributors as well as programmers. It is the traditional and newer television players that we focus on.

"Over the past ten years we've seen incredible growth," she continued. "Technology was always one step ahead of consumers. When TV Everywhere services first gained traction in 2011 there was a lot of confusion on 'how do I log in?' and 'on what devices does it work?' and 'what content is available inside or outside the home?' But fast forward to the past year; we reached an inflection point where the technology and the content and the operations are starting to simplify." In 2020, TVE made up 40% of ad views, but ad supported streaming services were 38% of ad views and continue to accelerate. With all of the device fragmentation, "Connected TV has emerged as No. 1, with close to 75% of device consumption," she noted.

What has facilitated CTV adoption, according to Zangwill, has been the rich choice of high-quality content, starting especially in 2013. She referred to it as "the Golden Age of TV, comprised of high caliber scripted shows including AMC's Breaking Bad and FX's The Shield" that consumers wanted to view on the larger screen. This timing, aligned with advanced technology like Roku boxes and Firesticks, accelerated CTV adoption. "Back then it was two percent of ad views and it more than doubled the next year. Seven years later, CTV makes up 62% of ad views, proving CTV is here to stay," she asserted.

The study also confirmed the power of live sports. "Five years ago, the 2016 Olympics in Rio de Janeiro, Brazil, led consumers to watch more live sports on digital platforms than ever before," Zangwill recalled. "In 2020, live content made up 55% of content consumption, and we expect the 2021 Tokyo Olympics will set new records later this year."

Another takeaway is the rise of programmatic. "It is another new data cut that we can now track moving forward," she explained. "It was in its infancy in the past decade, specifically around video. But it has been in a mature state now for a long time. In 2015, header bidding made the transition from display to video. Today 24% of impressions are executed programmatically. We expect to see that accelerate and continue in the next few years."

The pandemic, according to Zangwill, created decision fatigue, which led viewers to passively stream content throughout the day to fill the time. This trend could continue with live sports now back on our screens.

In order to keep the study up to date, accurate and relevant in a highly changing and evolving ecosystem, changes were made in the analytical structure of the study. "We re-architected the way we analyze the world's largest dataset of premium video ad impressions to reflect the changes we've seen in the market over the last ten years," she noted. "This year, we see a long pattern of fragmentation across systems, content and operations move towards integration, with notable examples of content aggregation, system simplification and operational consolidation." To that end, FreeWheel readjusted the way the database and queries were structured. "We took last year's study, broke it apart and put it back together so we have a lot more flexibility going forward."

Looking to the future, Zangwill concluded, "There is a lot of competition out there when it comes to ad supported services, and there are going to be organizations to opt-in for a low-cost value proposition. There will also be other players who are going to be more premium and have a higher price point that offers a different ad experience or different content. The value proposition will become very important."