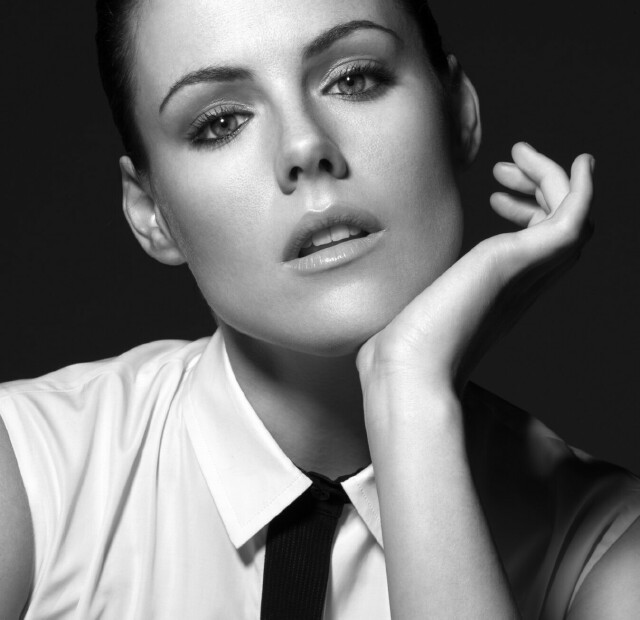 After its purchase of the fallen Quibi's content library, several new original series and a last hurrah for Zoey's Extraordinary Playlist, next up on the Roku Channel is the highly anticipated drama Swimming with Sharks (which at one point had been in the works as a Quibi short-form show). It's from actress Kathleen Robertson (Beverly Hills, 90210), who also serves as creator, showrunner and executive producer on the series. Kiernan Shipka stars as a young, bright-eyed new assistant at a major Hollywood studio, where she turns the tables on an abusive executive, played by Diane Kruger. With a full season drop coming on April 15th, Robertson joined MediaVillage to talk about the new series and the many hats she wore behind the scenes, along with appearing in the show.

"I've been an actor since I was 10 years old when I did my first movie, which is insane," she said with a laugh. "I always knew that I wanted to create and tell stories. I slowly started to write things and throw them in a drawer and not let people read them." When she finally let people see them, she was "definitely thrilled and pleasantly surprised that they seemed to respond. It's been a very long journey to get to this point, but it's always felt like a natural thing for me to do. Why wouldn't I want to do more than just be an actor?"

The series, loosely based on the 1994 film of the same name, shines a blinding spotlight on the darker and dirtier side of Hollywood that has slowly been uncovered in recent years, from toxic work environments and abuses of power to rampant harassment and sexual assault.

"The idea was brought to me by Lionsgate [in 2016], who I was working with on another project," Robertson recalled. "The idea was to re-envision the original film. I thought that I didn't have anything to say in this space unless it was being told from the female perspective. Other than the title and the world, that's kind of the only overlap."

Shipka's character Lou is just starting a highly coveted internship at Fountain Pictures under formidable CEO Joyce Holt, played by Kruger. Holt is as icy and heartless as can be, chucking her high heels and other objects at her assistants and forcing an executive out of her car in the middle of traffic after botching a deal. However, you still feel for the character when we discover Holt herself is a victim of abuse and assault from Redmond, her mentor and the owner of Fountain Pictures, played by Donald Sutherland.

"For me, it was about, 'How do I tell a really interesting, weird, warped love story between these two women?' -- one who is just starting out at the beginning of her career, just arriving in Los Angeles, and the other being a woman who, like me, has been in the industry for many years and is at a point in her life where she's checked off all the boxes," Robertson said. "She has the job, the career, the husband and all of that but she suddenly finds herself feeling 'I've put all of my eggs in this career basket and I don't have children and time is running out.'"

Robertson shared that she approached creating and writing the series from an actor's perspective, delving more into character depth and development rather than focusing solely on plot. "My entry point is more about what I am interested in and what's their inner journey, or something I haven't seen yet or feels specific to me," she explained.

The chilling words that Shipka's Lou says over eerie imagery in the series' opening scene is the perfect way to set up the entire show. "There are stories of love, inspiring success over the most insurmountable odds, empowering stories where we're not crucifying one another but playing fair. This is not one of those stories."

Swimming with Sharksfull six-episode season will be available on the Roku Channel starting April 15th.