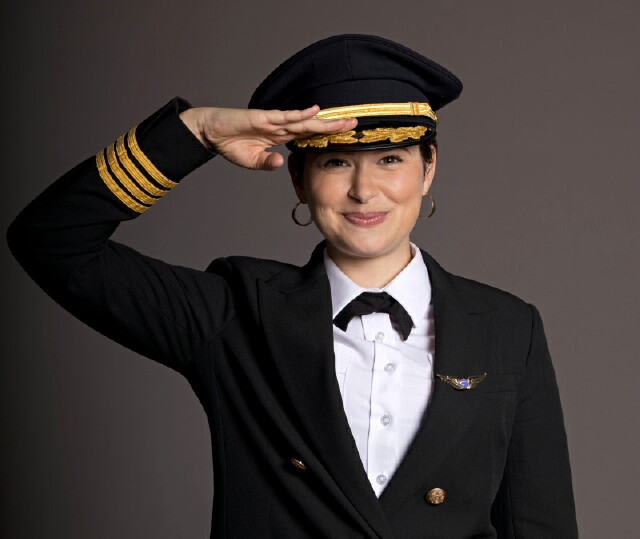 In a career filled with high points, actor Katie Lowes recently fulfilled a lifelong ambition by appearing in her first Christmas movie, CBS' upcoming Christmas Takes Flight -- one of only two original holiday films CBS has produced in a decade. (You can read an interview with Adam Rodriguez, the star of the other movie, A Christmas Proposal, here.) When the offer to play Jenny Beckett -- a pilot trying to save a beloved family Christmas tradition from a Grinch (Evan Williams) who's trying to ground Christmas -- landed in her lap, she didn't hesitate in accepting the role. "Christmas is a very special holiday in so many people's families, and especially my own," she shared in an exclusive interview with MediaVillage. "So, when they said, 'Would you like to be the lead of this Christmas movie?' I was like, 'Yes please, CBS! Let's bring the joy of the season, and let's bring my whole family to beautiful Vancouver for about five or six weeks.

"It was amazing," she continued. "We lived on the water. There were bald eagles, seals and ferryboats going by. We kayaked, canoed and got eaten alive by the biggest mosquitoes I've ever seen in my entire life. All while pretending that it was really, really, cold for Christmas. There's no harder acting than doing a Christmas movie in July and you're layered in scarves, hats and leather jackets while drinking hot cocoa and doing Christmassy things. It was a dream to bring my kids to Canada too, especially with the lockdown we'd all been living in." 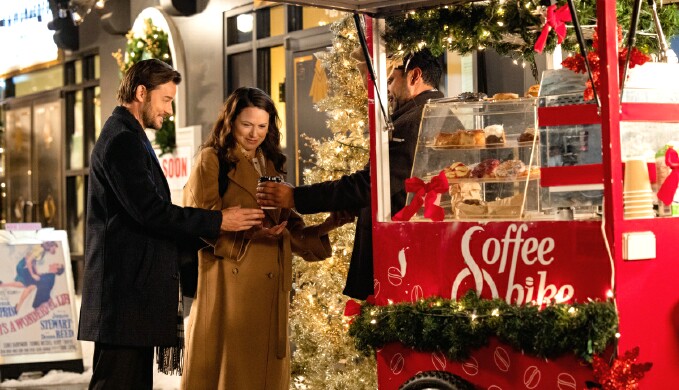 In addition to being her first Christmas project Lowes (pictured with co-star Williams) revealed the film afforded her a first experience of shooting in Canada. "I've been hearing about Canadian shoots my entire career," she laughed. "Everyone else has worked there, and I was sitting here so jealous during the pandemic, dreaming, 'Wouldn't it be lovely to go to Canada where there's more space, and for some reason, it just feels like less people?'

"And doing a Christmas film is almost a rite of passage for any actor," she added. "It's like being on Law & Order if you're a New Yorker. You're not a real New York actor unless you've been on Law & Order, had a recurring role on a soap opera, and been part of a Christmas movie. They're essentially romantic comedies and having done 7-8 years on Scandal, then Inventing Anna for Netflix, which Shonda Rhimes wrote and comes out in February, getting to do a romantic comedy was a breath of Christmas air! Like, 'Oh my God I'm not torturing anyone, nobody is torturing me, and I'm not screaming or crying.' Of course, there's conflict, as every good movie has a conflict, but it really was a dream to be the lead of a rom-com and in my own version of a 'Christmas Bridget Jones' Diary' or whatever, and with the nicest crew ever.

"The other fun thing was I hadn't gotten to be the lead of something and carry a movie and be in every scene," she explained. "When I read the script, I was so excited! She's a pilot, only 1% of pilots are women, and I felt like she was a real feminist. She's a single mom who runs the family business, and a person people look up to in her community. I felt connected to her as a mom, and very connected to her as a businesswoman. I was also excited that it didn't seem old-fashioned to me. It was Christmassy, and yes it was nostalgic, but I thought she was pretty cool and badass. I liked that she really loves what she does and it's a big deal to her." 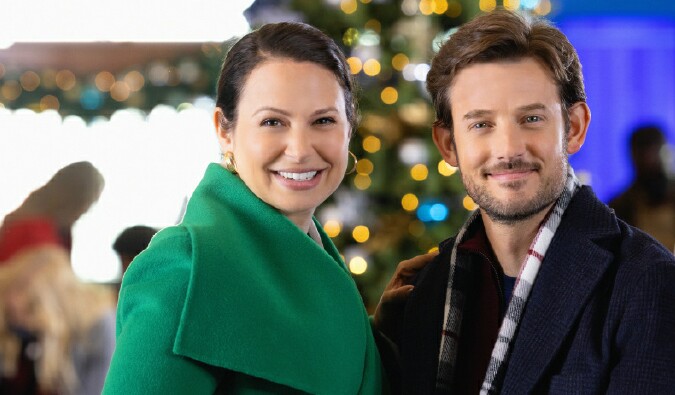 After relying on perennial favorites like Rudolph the Red-Nosed Reindeer to ring in the festive season, CBS' decision to let Lowes go nose-to-nose with Rudolph wasn't daunting at all. "I was ready for it and ready to take [it] on," she joked. "I love Christmas, and Christmas movies, so I was honored to be a part of this and to be a part of the long tradition of bringing people joy, especially during these times. My whole family of like 300 Lowes spends every Christmas in Buffalo, New York. We go to Granny Pat's house and spend Christmas eve at my great aunt Joan's house (Pat's sister) who's 92. Joan has a very, very secret Manhattan recipe that we drink from her old vintage holly glasses. It's delicious.

"I've wanted to be an actress my whole life," she added. "My family has memories of me making them sit through horrible performances as a little girl at Christmas time. Now I get to carry a CBS Christmas movie, and then it goes to Paramount+, so I'm like, 'Come on guys, we gotta bring our eggnog and popcorn to the movie theater, live the dream, and make a whole thing out of this.' I'm thinking of renting out a local theater, when it's not busy, as that would be COVID safe so we can all watch it together."

Christmas Takes Flight is just the beginning of a lovely romance Lowes is currently having with CBS. She's filming their upcoming mid-season comedy series How We Roll, playing another dream role -- a TV mom. "I grew up in the Everybody Loves Raymond / The King of Queens days," she exclaimed. "I love those women parts and have always wanted to play the mom/wife and try comedy. It was after doing the pilot I got the call for [this movie] and was I like, 'Okay CBS, I'd love to.' Working with CBS has been wonderful. [They've] provided me with another dream job.

"I've lived in Shondaland for a long time, and still do as I have Inventing Anna and do a podcast under Shondaland Audio called Katie's Crib," she added in closing. "I'll work with Shonda till the end of time, but if CBS is looking for a Christmas Queen, why not!"

Christmas Takes Flight will be telecast Sunday, December 19 at 8 p.m. on CBS.