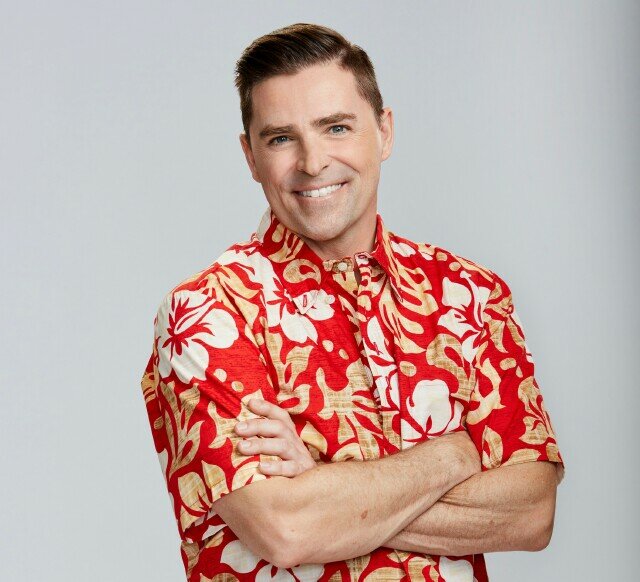 Those Hallmark Channel perennials Kavan Smith and Pascale Hutton re-team this weekend for another movie, You Had Me at Aloha, filmed entirely on location in Oahu, Hawaii. The film marks the third time this dynamic duo have co-starred in a Hallmark production (fourth if you count both of them starring on When Calls the Heart), and if you thought it was written into their contracts that they only work with each other, you're not alone. "It's funny because we were just talking about that," laughed Smith (pictured at top and below with Hutton) when MediaVillage chatted with him. "As strange as that sounds, it's not necessarily a bad thing when the person you're doing them with is so much fun. [Pascale] probably meant it as a joke, and people might get sick of seeing us together, but for us, it's so enjoyable.

"When you start something new and meet new people, obviously there's the possibility of new relationships," he continued. "But there's something comforting about knowing somebody so well when you get there. Our families all know each other, our kids know each other well, so even though she meant it as a joke, I think maybe we pushed it into her contract." 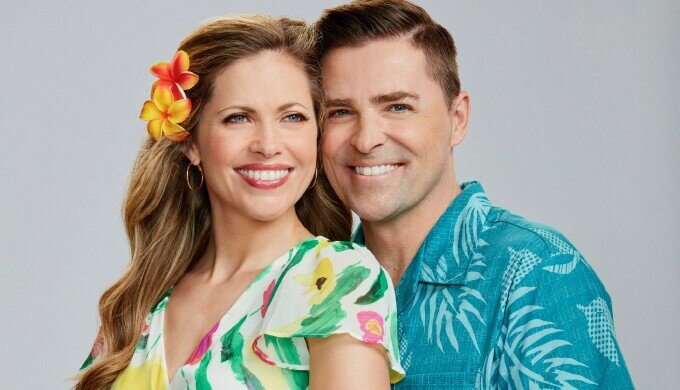 The thing that sets this project apart from the others they have worked on together is the fact it was based on an idea pitched by its stars; one that took place in a tropical location, as Smith told me in 2019. "Pascale and I were shooting the second of our Bride movies and Samantha DiPippo, a Hallmark executive, was visiting the set," he explained. "She mentioned Martin Wood, who is a good friend of ours, was directing a movie in Fiji. We both went into a rage of jealousy like, 'How could he go to Fiji and not take us?' I kept kind of busting Sam's chops to see if we came up with a pitch with a tropical destination, would she listen?

"Sam said she would," he added. "Both she and Pascal thought I was kidding -- but no! I was very determined. I really wanted to go somewhere, bring our families and we could [all] travel together. I asked Pascal what she wanted to do. She wanted to be the opposite of Rosemary on When Calls, somebody less sure of herself with some social issues, who's very slow and safe. I said, 'Great. I'll be the opposite of that. Let's go pitch that.' So, we came up with the premise, then Rick Garman and Sam cranked up the story."

Initially, Hutton was to portray a travel blogger, while Smith played the host of a wild travel show. However, tweaking the idea to have them both co-host a travel show, while not being each other's biggest fan, worked even better. With the idea locked, which tropical location would best provide the backdrop? "Oh, the Bahamas was definitely one of the destinations considered," laughed Smith. "We pitched Fiji, but the network had just been there. Hawaii was always in the conversation, and the Bahamas would have been so expensive. They hadn't shot in Hawaii, so we were trailblazers. The crew was fantastic, and it was Hawaii! Who wouldn't want to go there during a pandemic? It was super-refreshing for Pascal and me, but not so refreshing for our families as they didn't get to go."

Smith admits his travel host character Ben Burton is probably the closest he's ever gotten to playing a guy like him. "Pascal shows the agoraphobe, and I got to be me," he shared. "I love having fun on set and making people laugh. That's just how I've chosen to live my life, and with this guy, a lot of the stuff in the script was underwritten, so we could riff off one another. This was a green light for [us] to have fun."

And fun they had, indulging in zip-lining, UTV-ing and a lot of swimming. They even got mistaken for actually filming a Hallmark travel show. "We were really surprised how many people, not just Hallmark and When Calls fans, noticed us," he laughed. "Are you guys really doing a travel show for Hallmark?" was a common question and it confused people. One of the coolest things we did was a Luau scene. The hotel hadn't been able to do to any as they were shut down due to COVID. All the guests came out, so not only were we dancing in front of the extras and crew we were also doing it for hundreds of guests."

While the chances of Hutton and Smith actually hosting a travel show for Hallmark are slim, Smith loves the idea. "I think the banter would probably be a little less PG," he laughed. For now, the co-stars and good friends are already dreaming up their next outing. "We're bandying about what we want to do next and have a couple of ideas," he said in closing. "Hopefully the fans really like it, so we'll have the momentum to talk to the network about a couple other things. I like to have a few ideas percolating in my mind, so if they if they're willing to let us do more or something else -- great!"

You Had Me at Aloha premieres Saturday, June 5, at 9 p.m. on Hallmark Channel as a part of its annual Summer Nights programming event.