Kelly Clarkson Returns to TV as “The Voice” Welcomes Another Idol 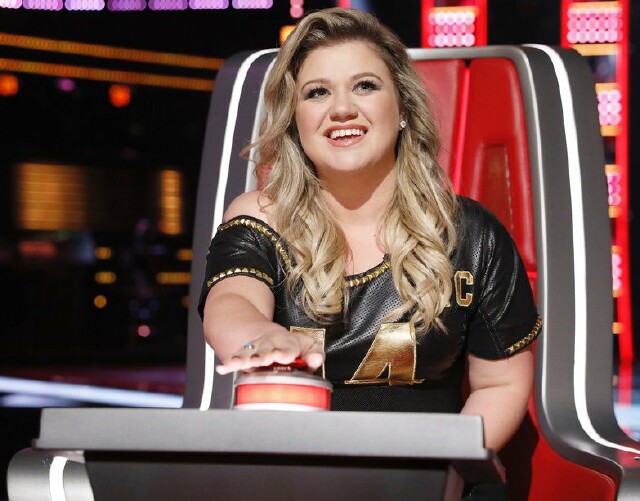 The Voice kicks off its 14th season tonight on NBC with another round of blind auditions.  In addition to its signature spinning chairs (which have been updated for the season), the ever-revolving lineup of coaches changes once again as American Idol alum Kelly Clarkson joins Adam Levine, Blake Shelton and Alicia Keys on the panel.  With the announcement late last year that Idol was to be revived by ABC, chatter that Clarkson might join that show as a judge was abundant.  According to Clarkson, whose association with The Voice dates back to Season 2 when she was a mentor for Blake Shelton's team, the possibility of her joining The Voice in a coaching capacity dates back to the show’s inception.  “We've wanted to work together forever, The Voice and I,” she explained during a recent conversation with MediaVillage.  “Years ago on a plane to Australia, before the show even aired, my manager was talking to me about it and I said, ‘That is completely brilliant,’” she recalled, adding that her manager also managed Shelton.  “The [blind auditions] make [the show]; they’re why America loves it.  At the core, people do love talent over just aesthetics all the time, and it is based on merit.”

Clarkson admitted it was a matter of timing when it came to actually joining the panel.  Seems after focusing on her family for the last few years, this was the perfect time.  "I couldn't work because my pregnancies are horrible," she said.  "I literally have been trying to work with these people since that Australia flight and I've been a fan since then."

Clarkson's addition to the show came as a welcome relief to Executive Producer Audrey Morrissey, too.  "We did breathe a sigh of relief for sure when Kelly joined,” she told MediaVillage.  "[She's] a force of nature and unbelievable; she's someone that has been a friend of the show for years.  She mentored with Blake and has performed on the show ... so it's all very close-knit.  She's been family for a long time.

"It's funny the way timing works out," she continued.  "We had been in talks with her for a while on and off.  She'd had her babies, was back in the studio, had music and was focusing her attention on work again, so of course we picked up right where we left off with our conversations.  We are thrilled she’s a part of The Voice; she has a strong personality and is just so much fun.  She's right there giving it to Adam, Blake and Alicia.  It's always fun for us and our fans to add a new coach if there's a new dynamic.  Kelly is so animated even I get taken in, especially when something happens and she'll stand up and do her little ‘Kelly dance.’  It's just so funny.  She's just so charming and we love her."  (Pictured below, let to right: Levine, Clarkson, Shelton and Keys.) 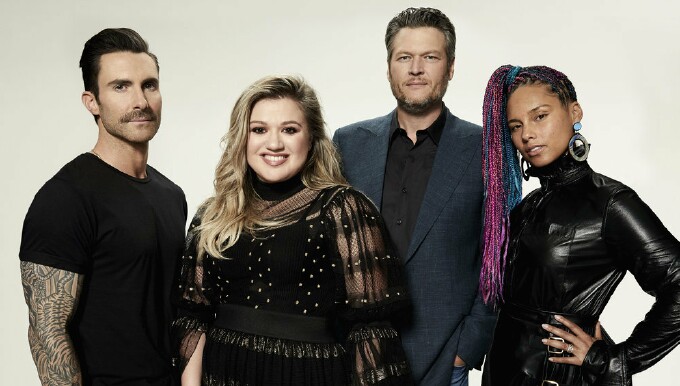 According to Morrissey, all of this season's coaches are having fun with a new twist – The Block.  "We love The Block,’ she laughed. “It’s shaking things up.  The rules are simple:  If two coaches hear someone singing and desperately want that person on their team, they can use a block button, which they only have one of, and it blocks the others from getting that person on their team."

While Clarkson fills the Voice coaching chair vacated by another Idol alum, Jennifer Hudson, who appeared last season, this isn't her debut as a TV competition show judge and mentor.  In 2012 she performed similar duties on the short-lived ABC competition series Duets alongside Jennifer Nettles, John Legend and Robin Thicke.  She remains thankful for that experience but admits The Voice is a different animal.  "I think my time in the industry and everything I've ever done helps me with [this] show," she shared.  "Nothing can be better than just immersing yourself in what you love.  I got to hang out with John Legend, and that ended up working into something else as well.

"I love everybody that did that show, but they're not capable of doing what's happening here," she added.  "When [contestants] are performing behind and you can't see anyone, that's a whole different thing.  I know it sounds like a simple thing, but it changes the whole game and that is why [The Voice] is the highest-rated show."

With her new role on The Voice about to begin, Clarkson reflected on a career that now spans almost 16 years and said she high hopes her acquired knowledge will ensure victory for one of her team members.  "What happened in my life was incredible," she said with a smile.  "I definitely do feel like I've come full circle.  I still feel like the same kid that entered this industry and still have the same sense of, like, awe about it and the same excitement."

The Voiceis telecast at 8 p.m. on Monday and Tuesday on NBC.