Ken Burns on Jackie Robinson and the Tyranny of Mythology 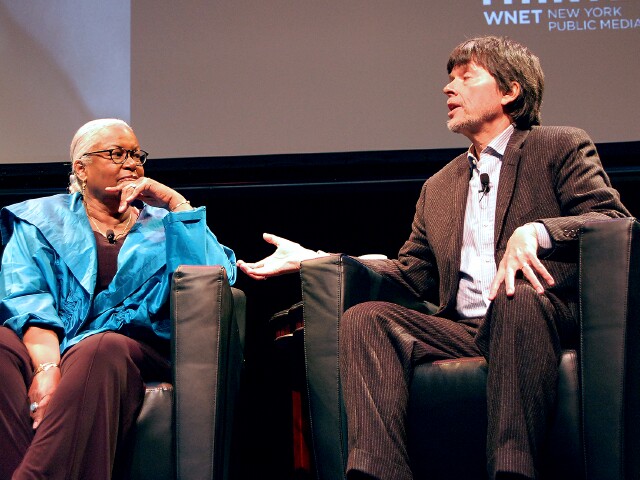 “Everywhere you turn in American history you come up against [race] and it’s not something that we’re used to wanting to confront; and as a filmmaker for 40 years I have had to confront it” said Emmy Award-winning documentary filmmaker Ken Burns the other night as he introduced his latest film, “Jackie Robinson,” at New York’s Schomburg Center for Research in Black Culture. The Center’s auditorium was filled with students, community members and scholars who had gathered to see a sneak peak of the two-part documentary (directed by Ken, his daughter Sarah Burns and David McMahon). It will premiere on PBS April 11 and 12 (check local listings).

Burns opened the evening by highlighting the notion that history’s most significant figures, such as men like Jackie Robinson, are often distilled to represent one-dimensional and uncritically revered versions of themselves, rather than the fully human and nuanced people that they were.

“When you liberate Jackie Robinson from the tyranny of that mythology, you also permit him to speak to us today,” said Burns, who presented short segments of the four-hour production that showcases Robinson the athlete, the husband, the activist and the man.

In a short amount of time, I realized that I didn’t know very much about Robinson. My limited experience with the man Burns refers to as “the most important person in the history of American sports” came from watching the 2013 movie “42,” which narrowly focused on Robinson’s years as the first African American player to join Major League Baseball in the United States, breaking the color line with the Brooklyn Dodgers. Burns’ film reveals that Robinson wasn’t just a star baseball player. At UCLA, he was the first college student-athlete to earn varsity letters in four sports: football, basketball, track, and baseball.

Throughout “Jackie Robinson” we see President Barack Obama, another “first black” in history that has had his fair share of hurdles to overcome, joined by First Lady Michelle Obama, to comment on the relationship between a powerful man and the woman standing beside him. In Robinson’s case, his wife Rachel was quite a force to be reckoned with. Mrs. Robinson founded the Jackie Robinson Foundation in 1973, which provides scholarships to minority students, and now at age 93 she continues to preserve her husband’s legacy through the visual medium of cinema.

The film further contextualizes Robinson as his own man, with personal and political points of view on the issues of the time. As Robinson began to use his voice to speak on controversial topics such as the Civil Rights Movement, many people suggested that a black man in his position didn’t have the right to comment on the black community.

“I don’t have it made until the lowest Negro has it made,” was Robinson’s retort. 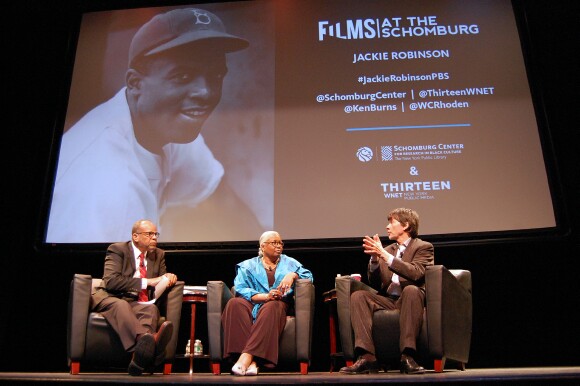 Burns was later joined on stage by legendary New York Times sports columnist William C. Rhoden (pictured above left) and Jackie’s daughter, Sharon Robinson (pictured above center and at top with Burns). Sharon made clear that she and her mother, Rachel, were adamant that Ken Burns be at the helm of a film about her father.

Burns said it was crucial for him to work closely with those who knew Jackie best.

“He remains my hero and an inspiration,” Burns said to Sharon during his closing remarks. “He has transformed our lives and we are so happy to be involved with your family. It is one of the great professional satisfactions of my life to be able to do what we accomplished.”

Photos courtesy of Antwan Minter. The opinions and points of view expressed in this commentary are exclusively the views of the author and do not necessarily represent the views of MediaVillage/MyersBizNet management or associated bloggers.