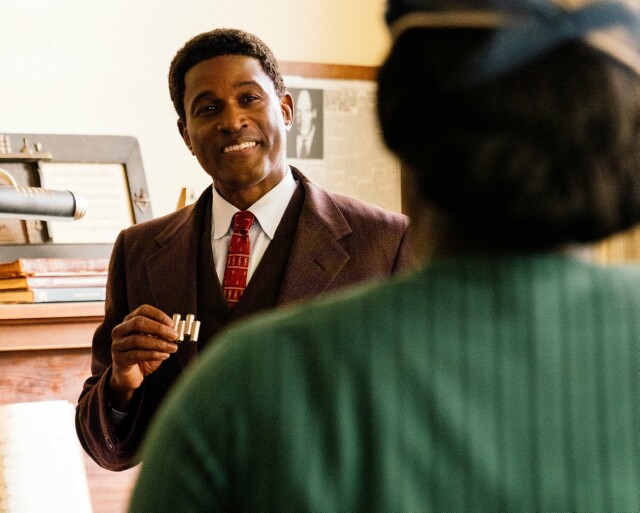 When Broadway shuttered in March 2020, director Kenny Leon's A Soldier's Play closed after only 58 performances. Leon (pictured at top) returned home to Atlanta and established a daily routine of listening to two hours of Mahalia Jackson, praying and riding his Peloton. He drew solace tending to his spiritual and physical needs. With that "came a confidence that everything is going to be okay, and my faith was everything will be all right," Leon said.

Within seven weeks, Tanya Lopez, executive vice president, movies, limited series and original movie acquisitions for Lifetime and LMN, and Good Morning America anchor Robin Roberts called. The result is Robin Roberts Presents: Mahalia premiering on Lifetime Saturday, April 3. Leon had directed Steel Magnolias for Lifetime and was happy to return to the network, providing "it was a story I feel that attached to," he explained.

It's not just directing this and acting in a cameo that attached Leon to the project. Rather, his is an iron-clad attachment, forged over a lifetime.

"I chalk it up to divine inspiration," Leon said during an exclusive interview with MediaVillage.

When Leon called his mother to tell her about the offer, he admitted he wasn't positive about taking it because he had "a couple of other projects bouncing around. My mother said, 'You can do whatever you want to do, but you cannot say no to the Mahalia Jackson story.'"

Like many people of true faith, Leon neither proselytized nor preached about why he was the right person to make this movie. Instead, he talked comfortably about it.

"In the business of entertainment, you have to have your confidence and your spiritual center," Leon noted. "God was saying, 'Okay, you need to focus on this particular story, and I need you to tell this particular story.' And so often, I find myself wondering who is telling this story and why. And you get someone who grew up Southern and Christian and Black, and sometimes the right person doesn't wind up with the right story to tell. I feel I was called to tell an authentic story about this Southern woman who was on this spiritual journey who America got to know.

"Since we were going through the pandemic of 2020, what better lens to look at it than a woman who had lived through the pandemic of 1918 and World War I and World War II and had become a confidant to Dr. King?" Leon continued. "And [here is] this spiritual Southern boy looking at that, and how much faith she must have had to live the life she lived. I thought viewers would look at this now and say, 'Wait a minute. We are not the first people to wear a mask in America. We are not the first to go through a hardship.'" 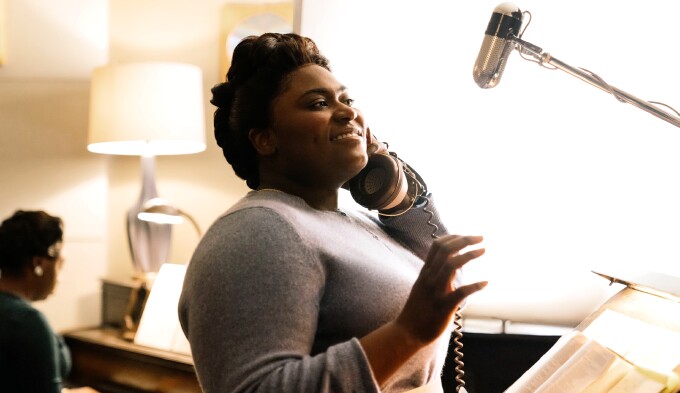 Leon begins the biopic with Jackson as a girl in 1923 and ends it a year before her death in 1971. With both scenes, folks are drawn to her singing as if pulled by a force unseen. It is, though, heard. It takes someone with Danielle Brooks' powerful voice to accomplish this.

Brooks (pictured above), the daughter of a mom very active in church, pulls this contralto from deep within her. When she sings Sometimes I Feel Like a Motherless Child and Precious Lord Take My Hand it is clear she is not alone on that stage. When Brooks closes her eyes, opens her mouth and lets her voice soar, she is powered by a greater force.

"Mahalia stood firm on her faith with God," Brooks said during a recent Television Critics Association press panel. "I've had to do the same thing through my journey. I think that's why I was so connected to who she was -- because I also grew up in the church, and I also had to lean on God when I felt like I couldn't do things. This was definitely one of those moments when I didn't know how the story was going to get told, where the story was going to get told. But I had to trust what was told to me in my spirit. What was given to me was that I was supposed to play Mahalia Jackson. I had to trust that."

Jackson turns to this man and says, "And David said, 'Make a joyful noise unto the Lord.' Don't you read your bible?"

Shortly after, Jackson takes lessons with a music professor (Leon), who tries to slow her down. Leon almost didn't get a chance to do his cameo in his own movie, because his papers to act in Canada, where they shot, had not arrived. Then, like all else with this production, everything fell together -- more proof this was meant to be.

The film shows Jackson as a fully realized woman who suffered heartbreak and surmounted hurdles. Along the way, there were two husbands and one reverend, the true love of her life. She was a devoted friend, including to the Rev. Martin Luther King Jr., who reveals his vulnerability to her. Whether singing at King's funeral, the Newport Jazz Festival or a storefront church, Jackson delivered a spectacular performance, one that, as Leon's mother says, came from her gut.

"When we shot the first song, My God Is Real, I remember people in that church -- there were a lot of people of different faiths -- when she sang live," Leon recalled. "People were crying! People out doing their jobs, they clapped. We had a church of many faiths right there. When it was over, all you could do was cry, shout and scream. I said, 'Okay, Danielle, we will not disappoint mothers.'"

Robin Roberts Presents: Mahalia will be telecast Saturday, April 3 at 8 p.m. on Lifetime.